I've seen it soooooooo many times. You've had an incredible night of partying with the ones you love all around you. Maybe you'd like to end the night with an upbeat dance classic. Perhaps you were envisioning a slower tempo song to round your night? Why not have the best of both worlds to round out this incredible night?  I've actually had brides and grooms choose a slow song and an upbeat song and I play them back to back right at the end of the night. This allows some of your guests who may not be into the fast dancing to get out and enjoy a final dance so that everyone can enjoy these final moments of your wedding reception. 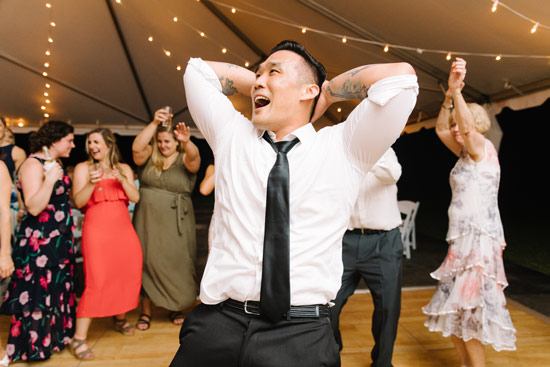 Find Charleston Wedding DJ Mike Bills On Spotify And Download This Playlist
Have you recently begun the brainstorm process on putting together the soundtrack for your wedding day? Be sure to find me on Spotify by searching for DJ Mike Bills. You'll also find other great wedding playlists for "playlist inspiration". If you are not on Spotify, you can scroll through this post and listen to each song by clicking on the link inside each song title.

"Come On Eileen" | Dexy's Midnight Runners
One of the most popular 80s song requests at my weddings in recent years. It's a very fun and upbeat song that starts out slow and ends on a fast note. I remember the video to this song during the early years of MTV. This one-hit wonder would easily reach Number 1 on the Billboard Hot 100.

"Last Dance" | Donna Summer
Perhaps the title of this song makes it a proverbial choice for "last dance" at weddings, but it's popularity is still high long after disco died, and after the untimely passing of the queen of disco Donna Summer.  It's another song that starts out a bit slow, then finishes with a fun, upbeat tempo. Released in the summer of 1978, the song would top the dance charts and make it to Number 3 on the Hot 100 charts.

"Never Gonna Give You Up" | Rick Astley
Another fun 80s classic here from the great Rick Astley. Some couples have requested this song as a bit of a joke, but it still garners a lot of support for the end of the night at your Charleston wedding. The song was released back in the summer of 1987 and make the top of the adult contemporary, as well as Hot 100 chart.

"We Are Young" | Fun. featuring Janelle Monae
It's hard to believe that at the time of this blog post that we are approaching 8 years since the release of this song.  Released in September of 2011, the song would top the Hot 100 by March of 2012. It's a great sing-a-long song for you and your guests.

"Bohemian Rhapsody" | Queen
Released in 1976, this song has seen so much growth over the years. In 1992, it was released again after the death of Freddie Mercury, as well as for Wayne's World. With the Freddie Mercury biopic released in the fall of 2018, the song once again gained even more mass appeal. It only reached #9 in 1976, but in 1992 reached #2 on the Hot 100 charts.

"All My Friends" | LCD Soundsystem
For those couples who'd like to end their night with a different song with an alternative sound, this is an excellent choice.  Where are your friends tonight? They are with you celebrating with you downtown at the Historic Rice Mill or Boone Hall Plantation.

"One More Time" | Daft Punk
For those couples who want to end their wedding night with an electronic classic, this one gets a ton of requests.  Released in November of 2000,  the song would sky rocket to Number 1 on the U.S and UK dance charts.

"Regulate" | Warren G
Maybe you want a little bit of West Coast hip hop to round out your wedding night?   Released in the summer of 1994,  you can find the song on the soundtrack to the movie "Above The Rim". The song would reach #2 on the Billboard Hot 100 chart.

"Sweet Caroline" | Neil Diamond
At the time of this post, this song is celebrating it's 50th birthday.  Crowds of all ages still respond to this song very well.  The song would go as high as #4 on the Billboard Hot 100 in August of 1969.

"Don't Stop Believin" | Journey
One of the most popular wedding anthems of all time since it's release in 1981. But in 1981, it did not chart into the Top 40. It was not until 2009 that it broke into the Top 10 reaching Number 6 on the Hot 100 chart. While some couples opt to leave this song off their playlist, the song is still in very heavy rotation at Charleston weddings.

"Livin' On A Prayer" | Bon Jovi
Charleston gets a lot of New Jersey brides and grooms coming here for their destination wedding. How do I know this? Well, they like to hire me to DJ their wedding.  The song was released on October 31, 1986 and would be the band's second song to top the Billboard Hot 100 chart.

"Home" | Edward Sharpe & The Magnetic Zeros
For those couples who like their wedding playlist with a smattering of songs from the Indie persuasion, this might be an excellent choice to wrap up your wedding night in Charleston.

"Let's Get It On" | Marvin Gaye
The best song to wrap up your wedding night if it's a slow and sexy song you crave to get you and your guests in the mood for a little after party, or maybe NO after party. :)

"Sweet Child Of Mine" | Guns N' Roses
Another great 80s rock song to wrap up your wedding night.  The song was released in August of 1988 and would reach Number 1 on the Hot 100 charts and be their only Number 1 song.

"Take Me Home Tonight" | Eddie Money
Not trying to sound like a broken record with all this 80s rock on this list of great last dance songs, but this is another strong song still in heavy rotation at Charleston weddings. The song hit radio in August of 1986 and would peak at #4 on the Hot 100 in November of 1986.  You can hear the classic 1963 song by the Ronette's "Be My Baby" in the chorus sung by Ronnie Spector.

"Closing Time" | Semisonic
Released back in March of 1998, this song has continued to remain popular for last song if the night.  The song would reach #1 on the alternative charts and become one of the biggest songs of 1998.

"What A Wonderful World" | Louis Armstrong
Probably in my Top 10 of favorite wedding songs to play at my weddings!  The perfect slow dance song to wrap up your night over at the Seabrook Island Club or Creek Club At Ion.

"Save The Last Dance For Me" | Michael Buble
Out of all the covers of this classic Drifters song, I think Buble's version might be the best in my opinion. Released in the spring of 2006,  you can find it on his album "It's Time"

"Let's Go Crazy" | Prince
You can find this song on one of the biggest selling albums of the 80s by Prince, "Purple Rain".  It still pains me to this day that we have lost Prince at such a young age, but this song charted again in 2016 after he died and peaked at #25.

"Bye Bye Bye" | N Sync
Wow. We're approaching 20 years since the release of this classic. It was the first single to be released off their album No Strings Attached in early 2000.  It would peak at Number 4 on the Billboard Hot 100.

"Piano Man" | Billy Joel
This is the title track to the 1973 album which peaked at #4 on the adult contemporary chart.

"Theme From New York, New York" | Frank Sinatra
Lots of New York brides and grooms have come to Charleston over the years and have hired me. It's not just the New Yorkers that want to wrap up their night with this classic from Ol' Blue Eyes.

"I Don't Want This Night To End" | Luke Bryan
For those modern brides and grooms who are more into their country music, you might can appreciate this song from the great Luke Bryan. You can find this song on his album Tailgates & Tanlines. The song would peak at #1 on the Country airplay and Hot Country charts.

Conclusion
As you can see, ending the night can be pretty fun! Spend some time reviewing this post or go ahead and be creative and think of a song that no one has thought of. By the time you do get to the end of the night, it should be all fun and games sort of like what you see below with this happy bride who I worked with earlier this year. I almost forgot an important one! Keep scrolling down to see which one it is! 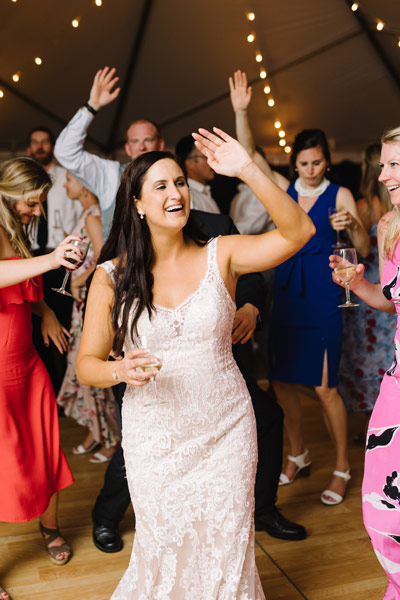 "I've Had The Time Of My Life" | Bill Medley & Jennifer Warnes
Patrick Swayze was probably going to roll over in his grave if I ended up forgetting this song.  It's a song that takes me back to my youth in the mid 80s. It was the summer of 1987 and "Dirty Dancing" opened up in the theaters on a Friday night.  The single was released about a month before the movie came out on July 10, 1987. The B side featured another song that was featured on the movie soundtrack as well. "Love Is Strange" by Mickey & Sylvia. The song would hit Number 1 on both the adult contemporary charts, as well as the Hot 100 charts.

Ready To Find A Charleston Wedding DJ And Begin To Plan Your Music?
Thank you so very much for making it to the end of this blog post. My goal is to make all my couples as happy with their investment as the bride you see up above.  If you are recently engaged and are in the beginning stages of finding your wedding entertainment, please look over my blog, as well as my Resources that include featured Wedding Venue posts, DJ Tips,  and Real Weddings. Just click back over to my website and click Resources, or you can set up a time to talk by clicking this link 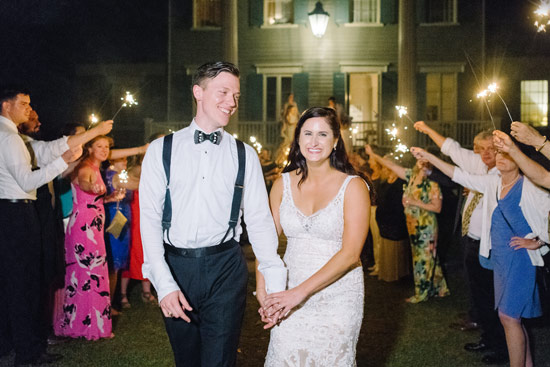 Quality Or Quantity: What Is Important When Finding Your Charleston Wedding DJ