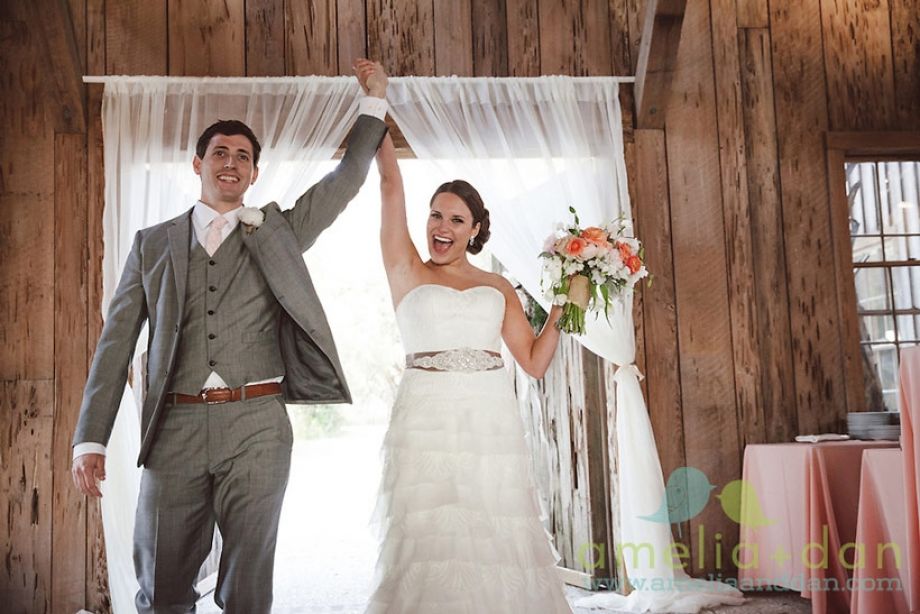 As one of the top Charleston Wedding DJs, I've seen it all. In some of my more recent weddings, I've seen couples put their own stamp on the grand entrance by selecting an upbeat song that probably hasn't been added to any list that has been published on the internet. Maybe you are a couple who is into electronic music? Did you know that some couples opt for a small hook of a song for each member of their bridal party?  While the DJ definitely needs to be his or her toes for a "multiple song grand entrance", it can make for an even more exciting experience for you and your guests.  While you decide which song you'd like to use for the grand entrance to your wedding reception and kick off the party, follow me on Spotify to check out this playlist, as well as many other wedding DJ playlist selections. If you are not on Spotify, scroll through this post and view each You Tube by clicking the link in each song title.

"Raise Your Glass" | Pink
What better way to start one of the funnest nights of your life than to "raise a glass". This song was released back in the fall of 2010 and went all the way to Number 1 on the Billboard Hot 100. You can find this song on Pink's album "Greatest Hits....Thus far"

"Handclap" | Fitz & The Tantrums
Fitz & The Tantrums is one of my favorite Indie pop bands and they released this song from their self-titled album in the spring of 2016. The song would reach all the way to Number 5 on the Billboard Adult Top 40 charts.

"Uptown Funk" | Mark Ronson & Bruno Marrs"
You know I was having a discussion with one of my DJ colleagues the other week about how very few Top 40 songs released today see the light of day in future Charleston wedding seasons. Usually there are 2  or 3 songs per year that might have enough legs to make it consecutive seasons. Uptown Funk is one of those songs and has been firmly placed into my recurrent category since its release in 2014. This great dance song is an equally awesome grand entrance song.

"Shut Up And Dance" | Walk The Moon
"Shut Up And Dance" is another one of those 2 or 3 songs that have gained popularity to the point that they become recurrent songs into future wedding seasons.  The song was released on September 10, 2014 and would reach the top of the Adult Top 40 and Adult Contemporary charts.

"Dynamite" | Taio Cruz
With lyrics like "I throw my hands up in the air sometimes Saying "Ayo"! Gotta let go.", it's a great choice for your gradn entrance and a great opportunity for you and your bridal party to throw your hands up in the air and have some real fun.  The song was released just in time for the summer of 2010 and went all the way to Number 1 on the Mainstream Top 40, as well as the Billboard Dance Club Charts.

"Everywhere" | Fleetwood Mac
You can find "Everywhere" on one of my favorite Fleetwood Mac records of the 80s, "Tango In The Night".  "Everywhere" was released at the end of November 1987 and would break the Top 15 on the Billboard Hot 100 and make it all the way to Number 1 on the adult contemporary chart.

"Best Day Of My Life" | American Authors
"Best Day Of My Life" was released in the spring of 2013 and has definitely been firmly placed into the recurrent category at Charleston weddings since then. Even if you don't use this for your grand entrance at Harborside East or Lowndes Grove, it's a great cocktail hour track for socializing.

"...Ready For It" | Taylor Swift
Taylor Swift is probably still taking it easy after her incredible Reputation tour. This TSwift song was the second single to be released in September of 2017 off her Reputation album.  This track would make it all the way to Number 4 on the Billboard Hot 100 charts.

"Bring 'Em out" | TI
For those brides and grooms who are into some of the older school hip-hop, this is a popular choice for grand entrance. TI released this song back in the fall of 2004, and it would reach #9 on the Billboard Hot 100 chart. BEWARE. Your DJ might need to edit this song down a tad due to some expletives, but once it's clean, it's party time!

"I Like It" | Cardi B - Bad Bunny - Malvin
An instant classic at Charleston weddings, this Latin trap song with a bit of a salsa beat was released before the summer of 2018.  The song would peak at #7 on the Billboard hot 100 charts.

"Forever" | Chris Brown
There was a very famous choreographed dance by a bridal party (it's probably still on You Tube) of this song.  This song was released in the spring of 2008 and would climb to #1 on the Mainstream Top 40 charts, as well as Number 2 on the Hot 100.

"Thunderstruck" | AC/DC
This Ac/DC classic is another popular rock track used for the grand entrance. Released in September of 1990, the song reached the Top 5 on the rock charts, and went all the way to #1 in Finland.

"Feel This Moment" | Pitbull Featuring Christina Aguilera
You can find this popular grand entrance song on Pitbull's 7th album "Global Warming". Released in February of 2013, the song would peak at #8 on the Billboard Hot 100 chart.

"Apache (Jump On It)" | Sugarhill Gang
While this song only reached as high as #53 on the Billboard Hot 100, it went as high #13 on the R&B charts and became one of the most popular dance songs in the early 80s.  If you grew up in the 90s, you probably remember Sir Mix Alot releaed "Jump On It", which had  alot of the same lyrics in it that Apache did.

"Shake Ya Tailfeather" | Nelly & P Diddy, Murphy Lee
What better way to get all your guests out of that serious "wedding ceremony" mode than to throw on this classic from 2003. The song was featured in the movie soundtrack of Bad Boys II and would top both the Billboard Hot 100 and the Hot Rap charts.

"Signed, Sealed Delivered (I'm Yours)" | Stevie Wonder
Classic Motown songs are always a big winner at Charleston weddings. Check out this very popular post about some of the most popular Motown songs
You probably could not turn the radio on in the summer of 1970 without hearing this signature song by Stevie Wonder. The song would top the Billboard R&B and the Cashbox Top 100 charts.

"I Believe In A Thing Called Love" | The Darkness
I've actually had the pleasure of playing the early 2000s alternative classic at one of my weddings. It was very fun and got the crowd pumped.  The song was released in September of 2003 and would hit #1 on the UK rock charts, and break the Top 10 on the Billboard alternative charts in America.

"Love Runs Out" | One Republic
"Love Runs Out" was the 5th single to hit radio in the spring of 2014 off the album "Native".  The song would reach the Top 5 in thirteen countries, including #4 on the Adult Top 40 charts. "Good Life" is another option if you are a big fan of One Republic.

"Good Life" | Kanye West & T-Pain
Speaking of "Good Life", here's another fairly popular rap song used for grand entrances for modern brides and grooms here in Charleston. You can find the song on Kanye's album "Graduation", released back in 2007. "Good Life" would reach #1 on the Hot Rap charts, and break into the Top 10 at #7 on the Billboard Hot 100.

"You Sexy Thing" | Hot Chocolate
Hot Chocolate was a British funk, disco and soul out of England. The song would hit #2 on the UK charts, and #3 on the U.S. Pop charts in 1976. If not for Queen's "Bohemian Rhapsody", the song would have had a great shot at Number 1.

"Eye Of The Tiger" | Survivor
Since 80s music is one of my specialties, I couldn't make it through this post without throwing on one of the most popular and recognizable songs of the 80s.  Released just before the summer of 1982, the song would be featured on the Rocky III soundtrack and reach Number 1 on the Billboard Hot 100.

Ready To Tell Mike Your Grand Entrance Song And Book HIM As Your Charleston Wedding DJ?
Thanks for making it to the end of another one of my blog posts.  There are so many other fun options for this all-important part of  your wedding reception. The grand entrance is a moment of your wedding reception where all eyes are on you. Just have fun!  At this time of the year, I am getting ready for my spring weddings and spending a lot of time on music research. A lot of my couples have very eclectic tastes in music and it takes some time to track down all their selections. It's a labor of love of mine though because all those hours put in behind the scenes equate to my couples having the time of their lives.  They will have the time of their lives because of the perfect mix of music about THEM.  Hiring your Charleston Wedding DJ is a huge step. Don't make a hasty decision! If you are recently engaged and want to set up a time to talk with me about your wedding, let's do it. I like my coffee black, but I am also available via Skype and Facetime for those destination brides and grooms. Click HERE to tell me a little more about your big day.

Quality Or Quantity: What Is Important When Finding Your Charleston Wedding DJ