The Most Requested Songs For Wedding Playlists | Part 5

And so it continues brides and grooms, if you are just hitting this blog post, you are at Part 5 Of The Most Requested Songs For Wedding Playlists. A lot of the songs you'll see on this series of posts are requested that have been taken over the years by wedding DJs all over the country.  One of my mantras as a top wedding DJ is to allow the modern brides and grooms who hire me to be their wedding DJ maximum latitiude to select their music for their wedding playlist. To be honest with you, this is a tried and true part of my success as a wedding DJ.  Thank you for visiting my website and blog and if you just got here, grab a notebook and put your headphones on and start dancing!.

Part 5 Of The Most Requested Songs For Wedding Playlists Is Available On Spotify
We're in the second half of this series of the most popular songs for wedding playlists. I hope you are continuing to jot down your favorite songs and are gaining some playlist inspiration for you.   In just a few short clicks, you could be over at my Spotify downloading all of these songs. Head over there now. Just search for DJ Mike Bills.

"Crazy In Love" | Beyonce
Rolling Stone put this song into their list of the greatest 500 songs ever. Beyonce is in high demand by a lot of my wedding clients. You can find this song on her album Dangerously In Love released in 2003. It should be no surprise that this song went all the way to #1 on the Hot 100 chart.

"Dynamite" | Taio Cruz
Dance floors back in the dsummer of 2010 were blowing up just like "Dynamite" when wedding DJs were dropping this song for the first time. "Dynamite" has been on the list for Popular Grand Entrance Songs too. The song would eventually peak at #2 on the Billboard Hot 100.

"Forever" | Chris Brown
Another popular choice for The Grand Entrance Song for your wedding reception, "Forever" would be released in the spring of 2008  and would become one of the top songs of the summer of 2008 peaking at #2 on the Billboard Hot 100.

"Come On Eileen" | Dexy's Midnight Runners
And this 5th installment of The Most Requested Songs For Your Wedding Playlist continues with an early 80s classic that was in heavy rotation on MTV.  "Come On Eileen" was released in the summer of 1982 and would peak at #1 on the Billboard Hot 100 chart.

"Stayin Alive" | Bee Gees
"Stayin Alive"is a major departure from some of their early 70s offerings like "How Do You Mend A Broken Heart?". The song would become their signature song when released at the end of 1977. The song would go all the way to #1 and stay there for 4 weeks.

"YMCA" | Village People
YMCA has been showing up a lot on Do Not PlayLists in recent years, but it's still a popular choice. If you are keeping up with all these posts, you saw I got to see KC & The Sunshine Band back in July 2010 at Boone Hall. The opening act for that concert were The Village People. Back then, I had been dabbling in some concert photography. Check out the image down below. 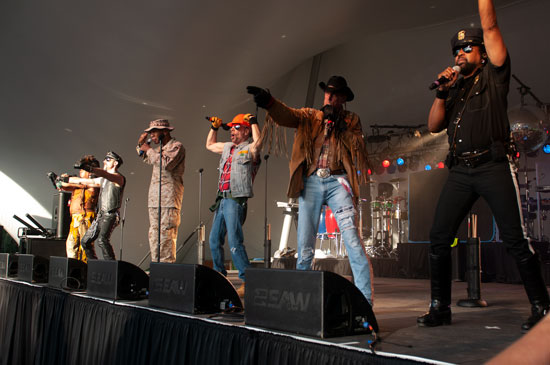 "Bang Bang" | Jessie J / Ariana Grande / Nicki Minaj
What do you get when Jessie J, Ariana Grande, and Nicki Minaj all get together for a song? The dance floor at your wedding goes "Bang Bang". "Bang Bang" would be released back in the summer of 2014 and would reach Number 1 on the UK single charts, and Number 3 on the Billboard Hot 100.

"Thrift Shop" | Mackelmore & Ryan Lewis Feat. Wanz
In the fall of 2012, brides and grooms and their wedding guests were all "popping tags" on dance floors all over the country. "Thrift Shop" was so catchy that it's still a very popular recurrent wedding song.  "Thrift Shop" would peak at #1 on the Billboard Hot 100 chart. For more  Modern Recurrent Wedding Songs <-----check out this link.

"Cheerleader" | Omi (Felix Jaehn Remix)
Jamaican singer Omi would release originally release "Cheerleader" in 2012, but German DJ Felix Jaehn would remix the song in 2014. The Felix Jaehn remix would peak at #1 on the Billboard Hot 100 after being released in the spring of 2014.

"Summer Of '69" | Bryan Adams
Before Bryan Adams settled down in the 90s and writing more love songs and ballads, he was rocking in the 80s and produced some of the most requested 80s songs on wedding playlists. <---Check out this link for more 80s. "Summer of '69" was released in one of the biggest years of Bryan Adams' career in 1985 and would peak at #5 on the Billboard Hot 100 chart.

"Cotton Eye Joe" | Rednex
While I've noticed that Cotton Eye Joe tends to stay off wedding playlist (in recent years) with my clients, if it were to be played, it would probably be thrown in late at night when the alcohol has taken effect so no one remembers :) Released in the fall of 1994, this Eurodance song would peak at #25 on the Hot 100, but #1 on the UK single chart.

"Ain't No Mountain High Enough" | Marvin Gaye / Tammy Terrell
If you've been following along with all the installments associated with The Most Requested Songs For Wedding Playlists, you've probably seen me mention songs that are "Wedding Playlist Gold". We can also put classic Motown Songs into that category as well. Released in April of 1967, the song would break into the Top 20. For more of the Best Motown Songs For Your Wedding Playlist. <---Check out this link.

"Wagon Wheel" | Old Crow Medicine Show
The modern brides and grooms who are purists when it comes to Americana and Folk music will most likely put this version of the song on their playlist. Back in 2013, Darius Rucker would record his version of the song that would become an instant hit at weddings. Looking for an amazing Americana Music Cocktail Hour for your wedding playlist? <<<Click the preceding link.

"Ho Hey" | Lumineers
"Ho Hey" would be the first time we would hear from The Lumineers. It was the first song to be released from their first album in the summer of 2012.  The song would peak at #1 on the Adult Contemporary chart, and #3 on the Billboard Hot 100 chart. "Ho Hey" appears on my very popular Indie First Dance Songs Playlist. <--Check it out by clicking on the preceding link.

"Electric Boogie" (Electric Slide) | Marcia Griffiths
Line dances have been on the decline in recent years, simply because modern brides and grooms think they are on the cheesy side.  Originally released in 1982, the song did not chart, but was released again in 1990 and would peak at #51 on the Hot 100.

"Gangnam Style" | Psy
Out of nowhere in the summer of 2012, Psy bursted onto the scene with a song that was packed dance floors at weddings all over America.  With 3.7 billion views on You Tube, it's one of the greatest viewed videos ever.  The song would peak at #2 on the Hot 100 chart.

"Everybody" (Backstreet's Back) | Backstreet Boys
If only we could go back to the 90s, a decade when we didn't have Facebook or Instagram, but we were still able to pack dance floors at weddings all over. Released back in the summer of 1997, "Everybody (Backstreet's Back)" would peak at #4 on the Hot 100. For more of The Biggest Songs From 1997 For Your Wedding Playlist. <---Be sure to check out this link.

"Brickhouse" | Commodores
"Brickhouse" is another song that's become a wedding playlist mainstay over the years. The song was released in 1977 and can be found on the Commodores self titled album.

"Just Dance" | Lady Gaga Feat. Colby O'Donis
When your wedding night comes, all that we ask of you is to dance the night away. "Just Dance" says Lady Gaga with Colby Adonis. "Just Dance" would be the first single from Lady Gaga and would be released in the spring of 2008 and would peak at Number 1 on the Billboard Hot 100 chart.

"God Gave Me You" | Blake Shelton
You can place this song into the popular country first dance song category.  The song was originally released in 2010 by Christian singer Dave Barnes, but Blake Shelton would cover the song in 2011 on his album Red River Blue. The song would peak at #1 on the Hot Country Songs chart in 2011 / 2012.

"Low" | FloRida Feat. T-Pain
When Flo Rida would release "Low" in the fall of 2007, it would be the first time we'd hear from this rapper.  Making it all the way to #1 on the Billboard Hot 100 and Rhythmic charts would be an excellent start for Flo Rida.

"Call Me Maybe" | Carly Rae Jepsen
Originally released in the fall of 2011, I can still remember that everyone was singing and dancing to "Call Me Maybe" on the dance floor that following spring. "Call Me Maybe" would make it all the way to Number 1 on the Billboard Hot 100.

Need To Ask A Question To Mike Bills About Hiring Your Wedding DJ?

Are you enjoying listening to all these Most Requested Songs For Weddings as much as I have enjoyed putting it together for you? Skip ahead to the Sixth installment of The Most Requested Songs For Wedding Playlists. <----Click HERE  Are you beginning to piece together a playlist? Got any ideas of what you'd like to hear? Be sure to click up above to be taken over to my contact form so that you can fill out and tell me some of the details for your big day. We'll then connect and set up a time to discuss your wedding. Thank you for making it to the end of this post and I look forward to speaking with you.