The culmination of another Charleston engagement season is upon us. Valentine's Day is now just a day away, and that day itself is actually in the Top 10 as one of the most popular days to propose. These past few days have been so warm here in Charleston and certainly have had me smiling about the spring wedding season that is just around the corner. Warmer weather just feels so much more romantic to me than cold weather. If you've read over my blog, you have a pretty good idea just how big an impact the perfect soundtrack that is created will play on your upcoming Charleston wedding day. But before we get to your big day in the Holy City, how did you envision the big moment that will turn into that wonderful day?  Music is powerful, and the right choice of song could make for a powerful and beautiful moment during your proposal. The type of song that you might choose to play during your Charleston wedding proposal is really going to depend on your mood. Some proposals are going to go down the very sappy and romantic love song route, whereas other proposals are going to be more funny and light-hearted.

And where in the Number 2 Wedding Destination In The Country were you thinking about popping the question? Well, you might already have a place picked out. You might already have dinner reservations at one of Charleston's finest restaurants, and are planning on doing it there. Charleston is one of the most romantic cities in the country for couples who are in love, and has in it some of the most perfect areas to say "yes". I'll be sprinkling a few of the more popular areas to get engaged throughout this post. Most couples are opting to hire a professional wedding photographer to capture this very special moment in their lives. One of my preferred vendors, the very talented Valerie Schooling of Valerie & Co. Photographers, who is one of Charleston's most talented photographers has captured over 50 proposals over the past few years, and would love to capture yours. Click over to my preferred vendors page to visit her website.  Looking to plan your romantic proposal and want to sample some of these very popular wedding proposal songs? Find DJ Mike Bills on Spotify and check out the playlist down below. If you are not into Spotify, just scroll down this post and click on each song title to be taken over to the You Tube.

"I Swear" | All 4 One | 1994
Originally released in the latter part of 1993 by country singer John Michael Montgomery, this male R&B group covered the song and it went all the way to Number 1 for 11 straight weeks in the spring and summer of 1994.

"Love Song" | Adele | 2011
Adele did an incredible job on this cover of the popular 80s song from The Cure. While some other lists seen online might place Adele's "Make You Feel My Love" on this list, I think this song is a better fit. You can find this excellent cover on Adele's 21 album.

"Let's Get Married" | Jagged Edge | 2000
Slow R&B for the win. Back in 2000, it spent 3 weeks at the top of the R&B charts, and is still popular favorite on Charleston Wedding DJ playlists 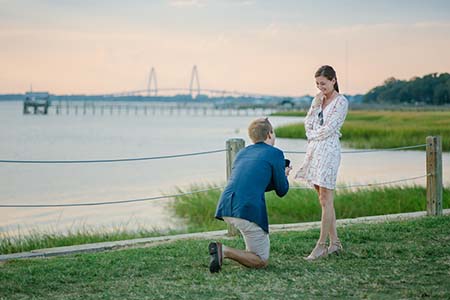 Photo Credit: Valerie & Co Photographers | The Pitt St Bridge In Mt Pleasant is one of the hidden gems in the Charleston area for marriage proposals.

"Marry Me" | Train | 2010
This song was the third track to hit radio off their album "Save Me, San Francisco" in the fall of 2010. It's become quite a Charleston wedding reception recurrent over the past 7 years. It's a perfect song for your proposal. The song would peak at #3 on the Billboard Adult Contemporary chart.

"I Choose You" | Sara Bareilles | 2014
This song has a medium tempo it, but that's OK, because after she says "yes", you'll be dancing around the park to this song.  Such a beautiful start to a "lifelong "love letter". The song would peak at #16 on the Adult Contemporary chart. 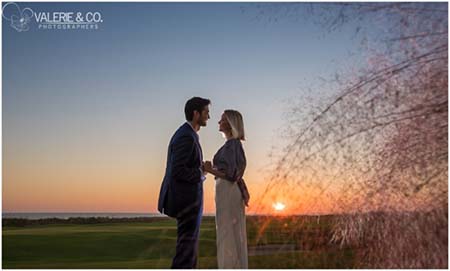 Photo Credit: Valerie & Co Photographers: Kiawah Island is one of the most beautiful beaches in the entire Charleston area and is also perfect for a wonderful wedding proposal.

"Let's Stay Together" | Seal | 2011
You can either use this excellent cover that I put into my recurrent category at many of my Charleston weddings, or you can go old school with the Al Green classic version. You can find this cover on Seal's album Soul 2, which also featured a cover of the Bill Withers classic "Lean On Me".

"Thank You For Loving Me" | Bon Jovi | 2000
This beautiful song was the third one to break off their album "Crush". after It's My Life, and Say It Isn't So. If you are a fan of those classic Bon Jovi power ballads that included "Always" and "Bed Of Roses", this song would be an excellent choice for your proposal in Charleston.

"Just The Way You Are" | Billy Joel | 1977
This was Billy Joel's first gold record in the United States back in 1977. It was covered masterfully by jazz singer and pianist Diana Krall in the early 2000s if you'd also to use her version. I just saw her at the Gaillard Center last weekend and she was incredible.

"Making Memories Of Us" | Keith Urban | 2005
The first version of this song was recorded by Tracy Byrd in 2003. Keith Urban went all the way to Number 1 on the Hot Country charts in the spring and summer of 2005 with his version.

"A Thousand Years" | Christina Perri | 2011
Such a beautiful song here that is in heavy rotation at Charleston Wedding ceremonies. You might remember this song as the second single from The Twilight Saga | Breaking Dawn album. The song would peak at #11 on the Adult Contemporary chart. 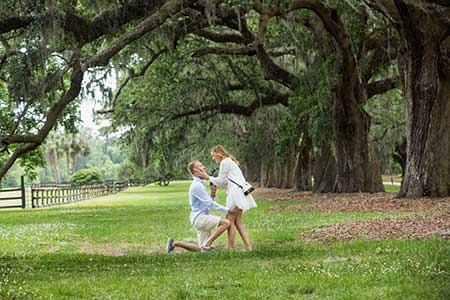 Photo Credit: Valerie & Co Photographers | Boone Hall Plantation is one of the most beautiful places for a marriage proposal because everything about it defines a Charleston wedding. After your proposal and she says "yes", stop by and grab a brochure about the plantation and begin planning your Charleston wedding.

"You And I" | Ingrid Michaelson | 2008
A cute and fun Indie pop track to round out this list of the top 15 songs for marriage proposals all around Charleston. You can find this song on Ingrid's record "Be Ok" released in the fall of 2008, which also features a cover of "Can't Help Falling In Love".

Good Luck With Your Proposal
Whatever happens to you on Valentine's Day, good luck and I look forward to hearing from more brides and grooms in the coming weeks who got engaged and are looking to get married in one of the top wedding destinations in the country.  Hope you enjoyed this list and if you are in the mood for a spontaneous proposal, get over to the jewelry store yesterday. :) If you are not in the mood to feel like John Cusack in that classic 80s movie "Say Anything" when he held the boom box up in the air, you might consider hiring a musician (guitarist or strings) to follow you out to where you are thinking about doing the proposal. Check out my preferred vendors page for musicians.  Thank you for visiting my blog on this Valentine's Day Eve and if you are ready to sit down with one of Charleston' s top wedding DJs, click HERE to tell me a little about the big day. I love to talk to couples about music for their wedding day.