The Best 80s First Dance Songs For Your Wedding Playlist

Fresh off of my first wedding of the new 2020 season here in Charleston, I felt the inspiration to put together (while it was still fresh in my mind) a new playlist that was comprised of my choices for First Dance Songs Of The 80s. My first real wedding of the year was held on March 1 at the lovely Alhambra Hall in Mt Pleasant. There will most certainly be a blog post for Ripley & Alaina in the coming days for their 80s and 90s infused wedding playlist that included a lot of songs that I've never played at a wedding before. As one of the top Charleston Wedding DJs,  I can tell you that no two weddings are ever the same when it comes to the music, and that's one of the things that I love about this passion of mine .  When I initially saw some of the selections for this past weekend, I had a huge grin on my face because a lot of the songs I played during my radio career for many years. But, it was the selection of first dance song  this past weekend that was one of the most special moments I had seen in quite some time.

I'll wait for the dedicated blog post that will be coming soon from Ripley & Alaina's very special dayand to go into a little more detail about their wedding playlist, but the choice for their first dance song was not a song you tend to think about in terms of first dance songs, but when you hear it, and read the lyrics, it's the perfect choice for two lovers who love the 80s.  Seeing it all play out inspired me to think of some other beautiful songs that could be used for the first dance from the 80s.

Download These 25 Best 80s First Dance Songs From Spotify Right NOW
If you just got engaged and are seeking some inspiration when it comes to picking the right music for your wedding day, I've made it a lot easier for modern brides and grooms to get inside my mind as a wedding DJ. Feel free to head over to Spotify right now and do a search for DJ Mike Bills to access all of my playlists that are continuously being updated. Let me know what you think.

"The Promise" | When In Rome
The first selection of my choices for best 80s first dance song is the choice that Ripley & Alaina made for their wedding at Alhambra Hall.  I'll go into more detail about their wedding in my next post, but "The Promise" was initially released in the UK in 1987, and would hit the radio in America in 1988. The song would make it all the way to #11 on the Hot 100, and #1 on the Billboard Hot Dance Club play chart.

"Eternal Flame" | The Bangles
What better way to describe your love for one another than a song called "Eternal Flame". After all, your love is beautiful and should be red hot and burning like a flame. This song was released in early 1989 and would become Number 1 in eight countries, including the United States. You can find the song on the Bangles album, Everything.

"Take My Breath Away" | Berlin
Before Top Gun was released in 1986, Berlin had been one of the most popular new wave bands out of Los Angeles. Then came "Take My Breath Away",  which was a song written by Giorgio Moroder. This make out song of the summer of 1986 would make it all the way to Number 1 on the Hot 100, and is a perfect first dance song from the 80s for your big day.

"Time After Time" | Cyndi Lauper
After the fun and exciting break out single in "Girls Just Wanna Have Fun", Cyndi Lauper would release this softer ballad that still is in heavy rotation at a lot of Charleston weddings. The song would be her 1st Number 1 song on the Hot 100 in the early summer of 1984. 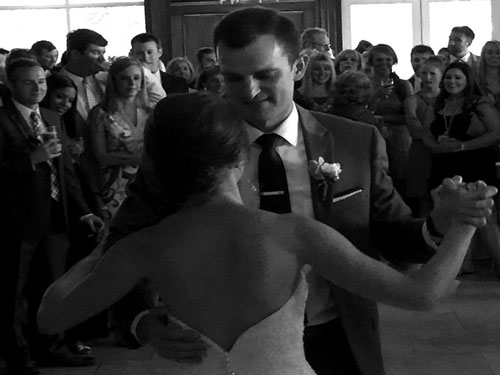 "In Your Eyes" | Peter Gabriel
But of course you know that I had to include this song from one of the most romantic movies of the 80s in Say Anything  . Originally released in 1986 from the album So, the song gained even more life when Say Anything was released in 1989. I think every engaged couples should watch Say Anything.

"Faithfully" | Journey
Even though this song from their album Frontiers only peaked at Number 12 on the Hot 100, "Faithfully" would become one of Journey's signature songs, and is also featured on one of my most popular 80s Soft Rock Hits For Dinner at your wedding post.

"Crazy For You" | Madonna
After all, you are both crazy for each other, so this is the perfect 80s First Dance Song for you and one that you might consider. The song was released in March of 1985 and can be found on the movie soundtrack to Vision Quest. "Crazy For You" would peak at #1 on the Hot 100. 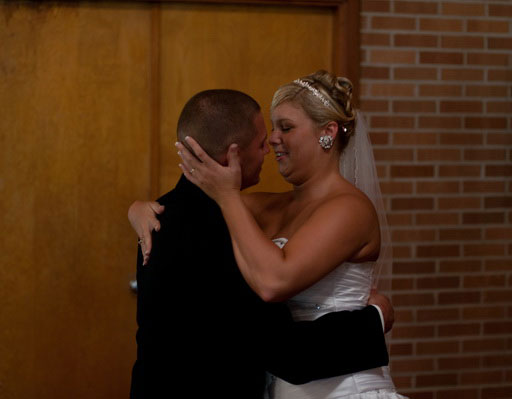 "The Search Is Over" | Survivor
Survivor was one of the biggest bands of the 80s and would release this song in the spring of 1985, which would peak in the Top 5 in the summer of 1985, and would peak at #1 for several weeks on the adult contemporary chart.

"The Lady In Red" | Chris Deburgh
While the odds that you'll wear a red dress to your wedding is highly unlikely, it's the texture and tempo of this song that makes me put it on this list of 80s First Dance Songs. It's slow and sexy and was one of the most popular songs of the summer of 1986 as it reached Number 3 on the Hot 100 chart.

"You & I" | Eddie Rabbit & Crystal Gayle
Back in the early 80s, there were country artists like Eddie Rabbit crossing over to the pop charts with songs like "I Love A Rainy Night".  In 1982, he would team up with Crystal Gayle for one of the great love songs of the 80s.  'You & I" would top the country charts, as well as #2 on the adult contemporary chart.

"Angel Eyes" | Jeff Healey Band
Released in June of 1989, this song always been a favorite of mine and would eventually break into the Top 5 on the Billboard Hot 100 after over 5 months on the charts. Come on man, look at your bride's eye. You know you are mesmorized. :) 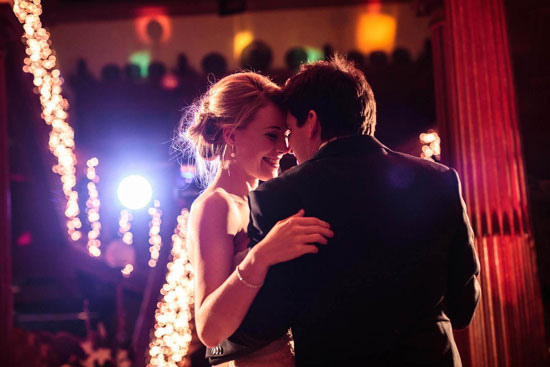 "If You Were Here" | Thompson Twins
If you are wondering why I put this Thompson Twins song on this playlist, instead of say, "Hold Me Now", just find the popular 80s movie Sixteen Candles on Netflix or Hulu and you'll see why.

"I Just Called To Say I Love You" | Stevie Wonder
For those of you who thought that "Signed Sealed Delivered (I'm Yours)" is Stevie Wonder's most popular song, you'd be wrong. This lovely song that was released in the summer fo 1984 would go all the way to Number 1 in 19 countries.

"True" | Spandau Ballet
One of the biggest worldwide hits of the 80s by Spandau Ballet. Released in the spring of 1983, the song would break into the Top 5 on the Hot 100, and peak at #1 on the adult contemporary charts.

"Baby Come To Me" | Patti Austin & James Ingram
Originally released in 1982, the song was sort of a flop, but then came one of the greatest stories in the 80s in the world of soap operas. "Baby Come To Me" would  be used for the scenes that included the iconic 80s soap couple Luke & Laura on General Hospital and would become a #1 song on the Billboard Hot 100. 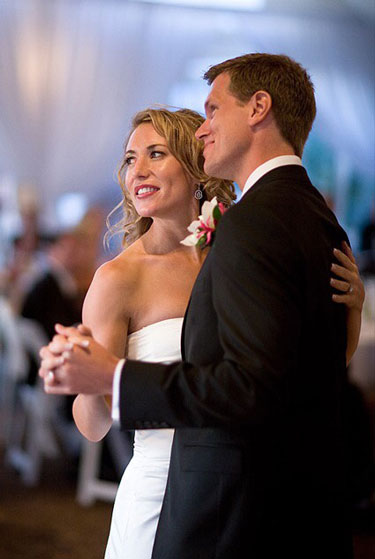 "Up Where We Belong" | Joe Cocker & Jennifer Warnes
Another romantic movie to watch as an engaged couple might be "An Officer And A Gentleman", and you would find this song. Released in the summer of 1982, the song would make it to #1 on the Hot 100, and sell well over a million copies in America.

"Head Over Heels" | Tears For Fears
With lyrics like "I wanted to be with you alone and talk about the weather.....", how could you not consider this as an 80s First Dance Song.  "Head Over Heels" was the follow-up to "Everybody Wants To Rule The World" would make it all the way to Number 3 on the Hot 100 in 1985.

"Heaven" | Bryan Adams
With the release of his album Reckless, Bryan Adams would have one of the biggest years of his early career in 1985. "Heaven" would become his first song to hit the top of the charts.

"Waiting For A Girl Like You" | Foreigner
Foreigner's hard core fans resented their decent into soft rock in the 80s, but when I heard this song for the first time, it just wreaked of romance, crushes, and long kisses.

BONUS
"Romance" | Terri Nunn & Paul Carrack
Back in the spring of 1989, there was a movie released called SING. It was more or less Footloose, but set in Brooklyn.  The movie flopped at the box office, but Terri Nunn and Paul Carrack released this beautiful ballad. It's not available on Spotify. If you go to Amazon, copies of the soundtrack (on CD) are being sold for $60.00 because there were not a lot of copies.  It was worth putting on this list and I invite you to take a listen by clicking the link in the song title. Maybe I can send a message to see if we can get it added into Spotify so I can add it to the list on there too. I'll keep you posted.

Interested in Securing Mike Bills As Your Wedding DJ?
Thank you for making it to the end of this very inspirational blog post. I could have waited a week or two to write this, but I had such an amazing time at this wedding over the weekend that I wanted to get my thoughts down on this post.  The 80s had so many great soft rock and love songs that would be perfect for the first dance song at your wedding.  One of my mantras as a wedding DJ is making sure that my clients are taken care of as it pertains to their music. This means giving them the latitude to create their own soundtrack for the most memorable wedding day. If this sounds like something you are interested, please click the link up above to tell me a little more about your big day.