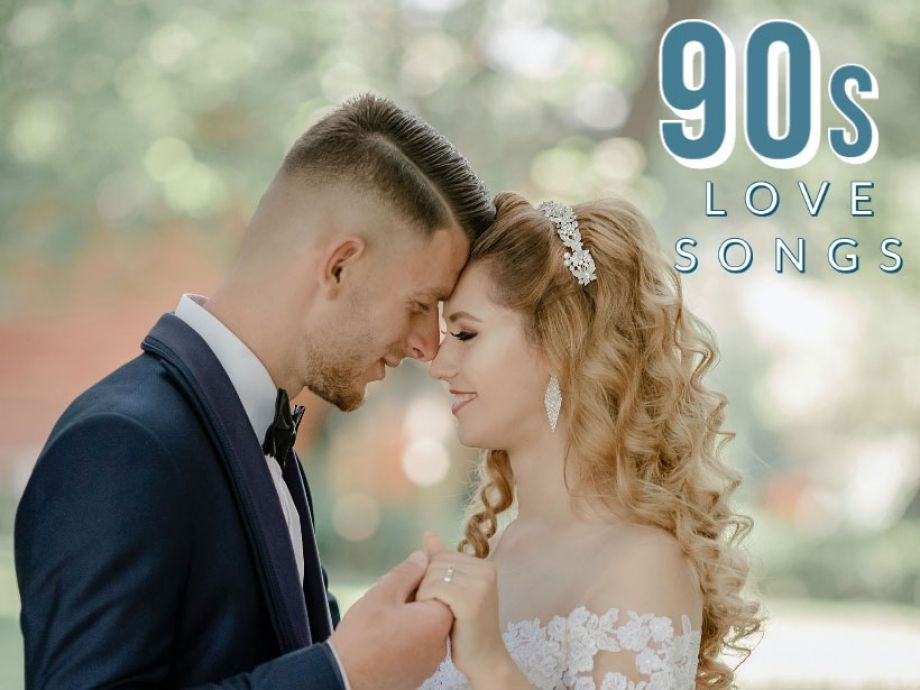 An increasingly large amount of brides and grooms that I have been meeting with over the past few months have been ranting and raving about their 90s music. 90s nostaglia has been going strong for quite some time now and I don't believe it's going to be leaving us anytime soon. As a matter of fact, I've taken it upon myself to go back and begin to refresh some of the older posts and added them to Spotify, one of which was 35 Songs From The 90s For Your Wedding Playlist. Feel free to go check that out and relive your youth. Today's post is about love songs from the 90s and in doing the research for this selection of songs, I found one or two songs you may not see on any other 90s playlist at any of the other wedding websites. This playlist is composed of some of the most popular love songs of the 90s.  Before you listen, you might want to make sure your fiancee is nearby. Thank you for stopping by my website and blog and let's talk soon after you listen to this playlist.

Download The Best 90s Love Songs From My Spotify Right NOW
And you know those brides and grooms I spoke about at the beginning of this post? Those same brides and grooms are actually coming to their consultation meetings with pre-made Spotify playlists. Yes, you guessed it, the modern brides and grooms who tend to contract me to be their wedding DJ are very much into their music. They are so much into their music that they love to put a lot of time into listening to each and every song that will be played the night of their wedding. You'll be able to download these awesomely beautiful love songs from the 90s off of my Spotify, as well as a plethora of numerous other playlists that will help you plan the perfect playlist for your wedding.  How do you get there? It's easy. All you need to do is head over to Spotify, and just search for DJ Mike Bills.

"Beautiful In My Eyes" | Joshua Kadison
I bet you won't find this song on a lot of the wedding music websites.  I would think a song about a love that lasts for eternity is an excellent song to be added into this type of playlist for your wedding. Joshua Kadison would burst onto the scene in 1993 with his debut album Painted Desert Serenade.  "Beautiful In My Eyes" would peak at #19 on the Hot 100 chart after its release in 1994.

"How Do I Live" | Leann Rimes
Written by songwriter Diane Warren, "How Do I Live" was featured on the album You Light Up My Life: Inspirational Songs.  "How Do I Live" would eventually peak at #2 on the Billboard Hot 100, and Number 1 on the adult contemporary chart.

"I Knew I Loved You" | Savage Garden
Savage Garden would wrap up the 90s on a huge roll. In 1999, they'd release their second album Affirmation. "I Knew I Loved You" would become the second song to be released to radio in the fall of 1999. The song would peak at #1 on the Billboard Hot 100 and Adult Contemporary charts and would continue on the charts as the new millenium kicked off in 2000.

"Back At One" | Brian McKnight
Back in the summer of 1999, the title track to his forthcoming album would be released.  "Back At One" would enjoy great success on the Hot 100, Adult contemporary, as well as the Rhythmic charts.

"I Finally Found Someone" | Barbara Streisand & Bryan Adams
You are getting married because you finally found that someone that you wanted to spend the rest of your life with. Back in the fall of 1996, Barbara Streisand would team up with Bryan Adams for this lovely  duet that would be used in the movie The Mirror Has Two Faces. The song would peak at #2 on the Adult Contemporary chart, and break into the Top 10 on the Billboard Hot 100.

"Hero" | Mariah Carey
In the summer of 1993, Mariah Carey would release her 3rd album, Music Box. "Hero" would be the second song to be released to radio. "Hero" would peak at #1 on the Billboard Hot 100, but only #2 on the Adult Contemporary chart. "Hero" has shown up on a lot of lists for Most Requested Father / Daughter Dance Songs. <---Click this Link For More Song Ideas.

"I Swear" | All-4-One
Originally the song was recorded and released by country artist John Michael Montgomery in the fall of 1993, but it would be the version released by All-4-One in April of 1994 that would become one of the biggest songs that summer and peak at #1 on the Billboard Hot 100, as well as the Rhythmic chart. "I Swear" also appears on my Top Songs For Proposals. <---Check out this link.

"Everything I Do, I Do It For You" | Bryan Adams
Back in the 80s, Bryan Adams was more into 80s rock, but in the summer of 1991, he'd record a song for the Robin Hood: Prince Of Thieves soundtrack that would move him into the easy listening, Adult Contemporary category. The song would become one of the Biggest Songs of 1991 when it was released that summer and would peak at #1 on both on the Hot 100 and the Adult Contemporary charts. For more of The Best Songs Of 1991 For Weddings. <---Check out this link.

"Now And Forever" | Richard Marx
Richard Marx was still growing strong as the 80s became the 90s.  "Now & Forever" would be the first song to be released from his 1994 album Paid Vacation. The song would peak at #1 on the Adult Contemporary chart, and #7 on the Hot 100 chart.

"2 Become 1" | Spice Girls
On your wedding day, the both of you will come together to become one, so you can see how this is an excellent choice from the 90s when it comes to great love songs. "2 Become 1" would be the 3rd song to be released off their debut album and it would hit radio in the summer of 1997 and top out at #4 on the Billboard Hot 100 chart.

"End Of The Road" | Boys II Men
Back in the early 90s, Boys II Men could do no wrong and were ALL over the radio.  Billboard would rate this song as one of the Top 10 songs of the entire decade of the 90s. It can be found on the soundtrack to the movie Boomerang. Released during the summer of 1992, "End Of The Road" would make it all the way to #1 and stay there for a total of 13 weeks.

"Take A Bow" | Madonna
In the autumn of 1994, Madonna would release her album Bedtime Stories, and "Take A Bow" would be the 2nd song to be released to radio in December 1994. "Take A Bow" would top the Hot 100 and AC charts. For more of The Most Popular Songs From Madonna For Wedding Playlists. <---Click on this link.

"Can You Feel The Love Tonight" | Elton John
1994 was a huge year for Elton John as one of the most popular movies of the 90s, The Lion King would be released to theaters. "Can You Feel The Love Tonight" would be released in the advance of the movie in the spring of 1994 and would peak at #1 on the adult contemporary chart. For more of The Most Requested Elton John songs For Wedding Playlists. <----Check out this link.

"Kiss From A Rose" | Seal
Originally released back in the summer of 1994, "Kiss From A Rose" would released again in 1995 when Batman Forever would be released to movie theaters. The song would peak at #1 on the Billboard Hot 100, as well as the Adult Contemporary chart.

"More Than Words" | Extreme
Hard-core Extreme fans know this band produced a lot more hard rock before they released this ballad in 1991. "More Than Words" would be released to radio in the spring of 1991 and would eventually top the Hot 100 chart, but only peak at #2 on the Adult Contemporary chart.

"Sometimes" | Britney Spears
After Britney's big debut in the fall of 1998 with "...Baby One More Time", she'd release more of a downtempo song with "Sometimes". Released at the end of April in 1999, the song would peak at #6 on the Mainstream Top 40 chart.

"I'll Be" | Edwin McCain
In January of 1998, Edwin McCain would release his album Misguided Roses. "I'll Be" would be the first song to be released from the album and would peak at #6 on the Adult Contemporary chart.

"Angel Of Mine" | Monica
British girl group Eternal would originally release this song in 1997, but Monica would cover the song for her album The Boy Is Mine. "Angel Of Mine" would peak at #1 on the Hot 100, as well as the Hot R&B chart.

"Rush Rush" | Paula Abdul
Back in the early 90s, you would not turn on the radio without hearing Paula Abdul. In the spring of 1991, she'd release her album Spellbound. "Rush Rush" would be the first single to be released from the record and would peak at #1 on the Hot 100, as well as the Adult contemporary charts.

"Have I Told You Lately" | Rod Stewart
The original version of this song was released in 1989 by Van Morrison and remains one of the most requested wedding songs of all time. Rod Stewart would cover the song for his 1991 album Vagabond Heart, but it would be the Unplugged version released in 1993 that would peak at #4 on the Mainstream Top 40 chart.

Ready To Talk To Mike Bills About Being Your Wedding DJ?
Ahhhh yes!  I really like this selection put together of love songs of the 90s. The 90s were an excellent decade when it came to artists releasing some of the most enduring ballads.  Those enduring ballads could be the perfect addition to your wedding playlist, perhaps through a first dance song or father / daughter dance song, or even a mother / son dance song. If you are on the fence about who you would like your wedding DJ to be and would like to schedule a call or a time to talk, please click on the link above to be taken over to my contact form so that you can provide some details about your big day. I look forward to hearing from you soon!