The Charleston Harbor Resort & Marina is practically a tropical paradise style resort right in Charleston. Located right on the Charleston Harbor in Mt Pleasant, it's very close by to Patriot's Point and only a hop, skip, and a jump away from downtown Charleston. The view of the bridge, as well as historic Charleston might be one of the best I have seen and provides a truly incredible backdrop for any Charleston wedding. Sara & Eddie came to earlier this spring by way of the Charleston Wedding Guide, which has really become the Charleston area's premier online resource presented by the Visitor's Bureau offering a whole host of resources for the local bride, as well as destination bride. Brides and grooms who are planning on coming to the Charleston area to get married and need an online resource to find the best wedding vendors and locations to say "I Do" can head over to the website at Charleston Wedding Guide.

Inside the resort you've got the Sunset Terrace, which is truly a beautiful area with it's views of the Charleston Harbors with those amazing sunsets. After a wonderful ceremony performed by a string duo out on the dock, the congregation of guests moved from the dock area into the terrace area for cocktails and socializing while the bride and groom and bridal party took advantage of the views for some great photography. Sara & Eddie had a large amount of guests coming from up north in Ohio and out west in Texas, and their playlist reflected that. Eddie, I might add is proudly serving our country in the United States Navy and is stationed here in Charleston. As a reminder to all active duty in our military, Mike Bills Entertainment is one of only a handful offering a 10% discount of all quotes. Thank you very much for your service to this country to Eddie, as well as all other men and women in uniform. 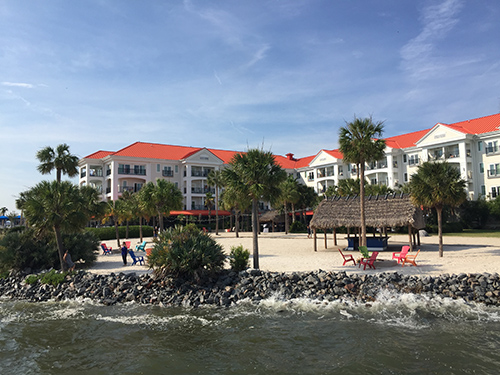 Bridal Party Introduction Song :  "A Different Kind Of Love" | Kid Runner. This selection was a custom selection on Sara & Eddie's playlist. Sara's brother was in the Indie band Kid Runner and chose this great song for their introduction.

First Dance: "Obsessed" | Dan + Shay | Released about a year ago in May 2016, this was a beautiful find and addition to my collection and perfect for a first dance. At just about 5 minutes, Sara & Eddie wanted to dance to the song in it's entirety and they loved it.

Father / Daughter Dance: "Diamonds And Daughters" | Aaron Watson. - Another great find and selection that should be added to the list of some of the most popular choice for father / daughter dances. It was released in early 2017 off his new album "Vaquero". This won't be the last time we here from Aaron Watson when it comes to that truly special moment between a bride and her father during her wedding day.

Mother / Son Dance: "Mom" | Garth Brooks. For Eddie's dance with his mother, he chose a wonderful song released in 2014 by the great Garth Brooks, simply titled "Mom". And I must say, this will be another song we put into the "mother/son" category for special dances.

Seeing that there were numerous folks who came down to Charleston from Ohio, it was essential that this song got played by the McCoys. It actually got played twice, :) Hang On Sloopy is a huge song at Ohio State games and became associated with the school back in the fall of 1965 after it was released.  Wedding guests chanted the letters O,H, I, O where the chorus dropped out and danced around mimicking those letters. It's awesome and wasn't the first time I've DJ'ed a wedding where some Ohio Statew folks were present.

Sara & Eddie opted for a custom playlist with no requests from the guests. Here are some of the more notable selections from the evening.

The reception wrapped up with a great track by Panic! At The disco called "Death Of A Bachelor".

Are you enjoying this blog? Look for more and more real wedding playlists in the coming months. Are you recently engaged and have begun your search for a true professional wedding DJ for your special day in the historic Holy City? Click HERE to schedule a consultation and let's go grab a coffee. I would love to DJ your upcoming wedding ceremony and reception.