The father - daughter dance is one of the most special moment s of your wedding reception. Here are 15 more songs for the Charleston bride to have that special moment with her father Mike Bills Entertainment

You know it's been a while since I talked about the father - daughter dance at Charleston weddings. As the years go by, tastes have a tendency to change as well as the choice of songs and genres. More often than not, the first man in a bride's life is going to be her father. While the year has changed and the music on the charts change, one thing that remains the same is that tender love between a father and her daughter during their dance at her wedding reception.  Depending upon the desired timeline of the bride and groom, the father - daughter dance usually occurs right after the first dance.  Doing the father - dance right after the first dance is a perfect time because ALL eyes are on the bride at this time. Your Charleston Wedding DJ will gracefully fade down your first dance and professionally fade in and announce everyone that a special moment is about ready to happen between the bride and her father.

This song is a truly beautiful way for the bride to express her gratitude to the first man in her life.  Choosing the right song will be an excellent gift and make him feel like the most important guy that he is.  Be sure to take some time to think about a song, and if you need to get together to practice your wedding dance, please do so. Some of the songs on this list are very popular choices, but some of the songs are more modern and more "2018-ish".  Put some thought into the song you choose and if you need any more help, let's set up a time to talk soon.

1. "Daddy" | Beyonce | 2003
Everyone always thinks about "Crazy In Love" when they think about Beyonce's first album "Dangerously In Love" back in 2003.  It was released to ITunes in the summer of 2003. Take a listen down below.  You can put this song into the modern and (less popular) father - daughter dance song category.

2. "My Little Girl" | Tim McGraw | 2006
This classic by Tim McGraw could be one of the top 5 most popular songs at Charleston weddings. It was featured on the movie soundtrack "My Friend Flicka".

3. "Wildflowers" | Tom Petty | 1994
This classic from the late Tom Petty is commonly used for both father / daughter dance, as well the mother / son dance. It's a beautiful song, and it pains me to think that Tom Petty has left us.


4. "My Girl" | The Temptations | 1965
"My Girl" by the Temptations is about as "American" as apple pie on the 4th of July and very "Charleston".  It's a song that brides and their fathers like to rehearse a dance to as well. 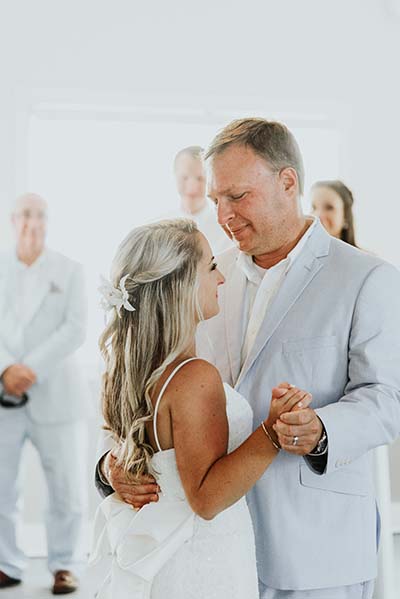 5. "I Loved Her First" | Heartland | 2006
The title track to their 2006 album has become one of the most popular "country" father - daughter dance songs to be requested at Charleston weddings.  It went all the way to Number 1 on the Hot Country charts in the summer and fall of 2006.

6. "Daughters" | John Mayer | 2004
The 3rd song to break from his album "Heavier Things" in 2003 was released in the fall of 2004. It would go all the way to Number 1 on the adult contemporary charts and become a popular father - daughter dance song in the years that followed.


8.  "What A Wonderful World" | Louis Armstrong | 1967
One of the Top 5 most popular choices for father - daughter dance at Charleston weddings. Louis Armstrong's version of this song was inducted into the Grammy Hall of Fame. 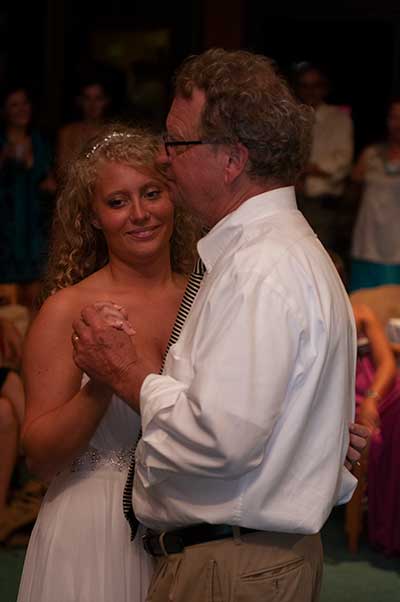 10. "GoodNight My Angel" | Billy Joel | 1993
This was the 3rd single to break off Billy Joel's album "River Of Dreams" in the winter and spring of 1994. It was written about his lovely daughter Alexa Joel.

12. "Daddy's Little Girl" | Michael Buble | 2002
Michael Buble covered this classic song on his second album "Dream" in 2002. It has a much different tone to it than the classic Al Martino version.


15. "Father And Daughter" | Paul Simon | 2006
You might remember this song from the movie in 2002 "The Wild Thornberrys Movie". Paul Simon actually wrote this song about his daughter. It would be released on his 2006 solo album "Surprise"

16. "Daughter" | Loudon Wainwright | 1995
There might not be anything more beautiful than a father singing to his daughter. Be sure to listen to this song and you'll probably get a little tear in your eye.

17. "Wind Beneath My Wings" | Bette Midler | 1989
From the soundtrack of the movie "Beaches" back in 1989, Bette Midler releases this song and it becomes the Number 1 song in the country by that spring.

18. "Forever Now" | Michael Buble | 2018
Back in 2018, Michael Buble releases the album "Love" and thus a new, modern father / daughter dance song is also born. Take a listen down below and you'll see exactly what I mean.

19. "You're My Best Friend" | Queen | 1976
You can find this song on the classic album "A Night At The Opera", which also features another popular wedding classic, "Bohemian Rhapsody". The song would break into the Top 20 on the Billboard Hot 100 in the summer of 1976.

21. "There Goes My Life" | Kenny Chesney | @004
This song has been a very popular choice over the years for this special moment. Listen to the very meaningful lyrics. You can find the song on the album, "When The Sun Goes Down".

23. "Daddy" | Abby Anderson | 2014
Quite possibly one of the most beautiful modern father / daughter dance songs released over the past decade.  Watch the music video for the song and see if you don't get a little choked up.

24. "In My Life" | The Beatles | 1965
You can find this classic Beatles song on their "Rubber Soul" album.  I really love the lyrics, "For people and things that went before,  I know I'll often stop and think about them, In my life I'll love you more".

25. "It Won't Be Like This For Long" | Darius Rucker| 2008
The pride of Charleston, SC, Darius Rucker has morphed into an incredible country singer. Released off of his first country effort in 2008, this song will cause lots of tears among your guests. Be sure to watch the video down below.

26. "Landslide" | Fleetwood Mac | 1975
This is a beautiful song choice for your father / daughter dance. Just take a listen to the song and you'll see how Stevie Nicks says "this is for you daddy".

27. "Daddy Dance With Me" | Krystal Keith | 2013
The things you learn when you are doing song research for your brides and grooms. Krystal Keith is one of Toby Keith's daughters. She wrote this song for her own wedding.  It's an incredibly emotional and moving song.  Before you watch the video, make sure the Kleenex is nearby.

28. "Unforgettable" | Nat King Cole & Natalie Cole | 1991
Originally recorded back in the early 1950s by the late Nat King Cole,  his daughter Natalie Cole did a duet with him through the power of recording technology.  Released in 1991, the song would reach #3 on the adult contemporary charts.

29. "A Song For My Daughter" | Ray Allaire | 2010
Another perfect song for a father who is so very proud of his daughter.

30. "Baby Father" | Sade | 2010
It's hard to believe it's been nearly 10 years since the release of Sade's album "Soldier Of Love".  You can find this beautiful father / daughter dance song on it.  You can also see my favorite Sade songs by clicking over to this archived post.

31. "Sweet Pea" | Amos Pee | 2006
I've actually used this song for a bride and groom's first dance song, but it's also very beautiful for the father / daughter dance. You can find it on the album "Supply & Demand".

32. "I'll Always Be Your Baby" | Natalie Grant | 2003
With lyrics like "No matter how the years fly by, The way you loved me, Made me who I am in this world..." it's easy to see how this would be a beautiful song for your father / daughter dance.

34. "Dance With My Daughter" | Jason Blaine | 2015
Beautiful song about a father who believes in his daughter and wants to dance with his daughter on the most beautiful day of her life.

35. "How Long Will I Love You" | Ellie Goulding | 2013
From the album "Halcyon Days",  this is an amazing modern father daughter / dance song because you'll always love your dad as long as the stars are above you.

Hopefully these 15 songs gave you some ideas about what you'd like your father - daughter dance song will be at your upcoming Charleston wedding. While I don't think you should completely overthink what song you'd like it to be, you should put some time into it so it's really special moment for you, as well as for your guests. As a professional wedding DJ who has experienced a lot of these dances, I can tell you that under most circumstances that there is not a dry eye in the reception venue when this dance occurs. So, be sure to pack those Kleenex.  :) Weddings can conjure a full range of emotions. I prefer to think of the song you choose for this dance as one that will bring a tear to your eye, and a smile to your face. :) I wanted to thank you for reaching the end of this post. The fact that you reached the end of this post means that you are enjoying the content on this blog. It's a labor of love in putting these posts together for all the brides and grooms looking for one of the top wedding DJs in Charleston. Feel free to explore all the other content on this blog. Music is a true passion of mine, and I absolutely love to share that with my prospective clients.  If you are recently engaged and are ready to begin the interview process for your wedding DJ, click HERE to tell me a little more about your special day in Charleston.

Tweet
More in this category: « 15 Eric Clapton Songs | Classic Rock For The Cocktail Hour Charleston Wedding DJ Playlist | The Music Of 1988 Part 2 »
back to top