Best Reggae Songs For Cocktail Hour On Your Wedding Playlist

We've reached the middle of January now, and perhaps it's because the temperature only made it to 45 degrees today that I have caught myself numerous times today daydreaming about much warmer days. Reggae is definitely a genre of music that has me thinking of those carefree Charleston days of spring and summer. Reggae has it's origins dating back to the late 1960s coming from Kingston, Jamaica. Maybe it's the fact that the music came from that lovely tropical island that allows me to think about gentle summer breezes downtown at the Historic Rice Mill while at a wedding ceremony or maybe out at the Seabrook Island Club watching the sunset, and doing the same while out at the Creek Club at Ion, which might have the best sunset views in the entire Charleston area. Reggae seems to pop up quite frequently on many Charleston wedding playlists, but how about doing it for the entire duration of your cocktail hour? I love to mix things up for my clients and doing an all-reggae cocktail hour playlist would make for an amazing start to the music at your wedding.

If you are going to talk to your Charleston wedding DJ about putting together an all-reggae cocktail hour playlist, then you might also want to get with your wedding planner and caterer to see about serving a signature "reggae cocktail" Yes, that's right! he said "Reggae cocktail". You can search around Pinterest for signature wedding cocktails, but I might have found a great one for you.  Feast your eyes down below on The Kinky Reggae Doesn't it look simply delicious? 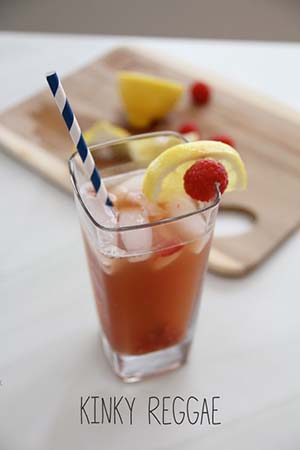 Let the kinky reggae be the signature drink at your cocktail hour. It's simple to make too. It's made of lemonade & iced tea & raspberry vodka. Doesn't it sound delicious? Let me get back to business here. Take a listen down below to these great reggae selections for your Charleston wedding playlist.

Download These Reggae Songs From Charleston Wedding DJ Mike Bills On Spotify.
Need some ideas on how to put together a playlist for your wedding? I have you covered.  Putting all these playlists over on Spotify profile is one of the biggest ways that I get to cater to the modern bride  and groom. If reggae is not your thing, you'll have the chance to peruse numerous other playlists designed to give you inspiration on selecting your wedding music. All you need to do is head over to Spotify and just search for DJ Mike Bills. If Spotify is not your thing, you can listen to the songs on this post by clicking the links in the title and be taken over to You Tube.

"Pressure Drop" | Toots & The Maytals | 1969
Rolling Stone magazine rated this song at Number 453 out of 500 on the greatest songs of all time. The song also helped launch the band's success away from Jamaica.

"Pass The Dutchie" | Musical Youth | 1982
This song was released back in September of 1982 and was one of the early iconic music videos during the early years of MTV. If you are a fan of the Wedding Singer, you may have remembered this song appeared on the soundtrack.

"Close To You" | Maxi Priest | 1990
This song broke on the radio back in the summer of 1990, and was all over MTV too. As summer turned into fall, "Close To You" peaked at Number 6 on the Billboard charts. I've been lucky enough to grab many remixes of this song. It's a definite must for a reggae cocktail hour.

"I Can See Clearly Now" | Jimmy Cliff | 1993
Back in 1993, reggae musician Jimmy Cliff did an amazing "reggae-infused" cover of the 1972 smash hit by Johnny Nash "I Can See Clearly Now". The song appeared on the Cool Runnings movie soundtrack and is such a relaxing song. If you are feeling down and depressed, put this song on and you'll start to feel a little better.  This classic Johnny Nash cover also appears on my Best Charleston Wedding Cocktail Hour Playlist.

"Could You Be Loved" | Bob Marley & The Wailers | 1980
To say that Bob Marley was "iconic" in the world of reggae would be putting it mildly. This song came out on the Wailers last record in 1980 titled Uprising. Absolutely perfect for any Charleston wedding cocktail hour playlist.

"Black Roses" | Barrington Levy | 1982
Levy became one of the biggest Jamaican stars in the early 1980s after he had achieved success with his band the Mighty Multitude in the later part of the 1970s.

Red Red Wine | UB 40 | 1988
Originally written by the great Neil Diamond in 1967, UB40 did an excellent reggae cover of it that reached Number 1 on the Billboard Hot 100 back in the fall of 1988.  In the case for your cocktail hour, let's maybe save the red wine for dinner and stick to a nice reggae cocktail :) "Red Red Wine" was one of the biggest songs of 1988 and you can learn more about this great year in 80s music by clicking on this link.

"Boombastic" | Shaggy | 1995
We go back to the mid 90s for this next song. It samples Marvin Gaye's "Let's Get It On", and reached all the way to Number 3 on the Billboard charts. I'll play the original Marvin Gaye toward the end of the night for you.

"Rude" | Magic | 2013
This was debut single from that had a reggae infused vibe, and it reached all the way yo Number 1 in America, but only Number 6 in their home country of Canada.

"Get Busy" | Sean Paul | 2003
This is a great party song with that reggae vibe to throw duirng your cocktail hour to loosen up your guests after the wedding ceremony. Definitely a song you'd want to listen to with a nice reggae cocktail.

"No Letting Go" | Wayne Wonder | 2003
At the time of the posting of this blog, we'll approaching the 15 year mark since this song dropped back in 2003. It reached Number 11 on the Billboard charts in America, and Number 3 in the UK.

"In The Summertime" | Rayvon | 1995
The album was Boombastic and it was released back in 1995. Shaggy did an excellent job at this classic 1970 Mungo Jerry cover. If you are a Baywatch fan, you might have remembered him performing this song on an episode. This cover was the first song to be released from the album and would peak at #3 on the Billboard Hot 100, as well as #1 on the Hot R&B chart.

"Can't Stand Losing You" | The Police | 1978
The Police mixed rock with reggae on their 1978 album Outlandos d'Amour. "Can't Stand Losing You" was not released  as a single in the United States, but was released twice in the UK. The first time the song missed the Top 40 in 1978, but in 1979, the song was re-released and peaked at #2 on the UK chart.

Interested in Speaking With Mike Bills About Being Your Wedding DJ?
Wow! That was so awesome! I'm glad I thought about this theme for another one of my Charleston Wedding DJ playlist ideas for the cocktail hour.  Now, I'll patiently wait til we get some warmer weather back into Charleston in the coming weeks and months. In the meantime, thank you very much for finding me and this blog and since you made it all the end of this post, that must mean you enjoyed it. It is a passion of mine to supply my prospective brides and clients with fresh content up on my website.  If you are interested in learning more about me, feel to free to click back over to other sections of my blog. Are you getting married in 2020 or beyond and beginning to search for your wedding vendors? Click on the link up above to be taken over to my contact form to fill out your information so we can set up a time to talk about your wedding.