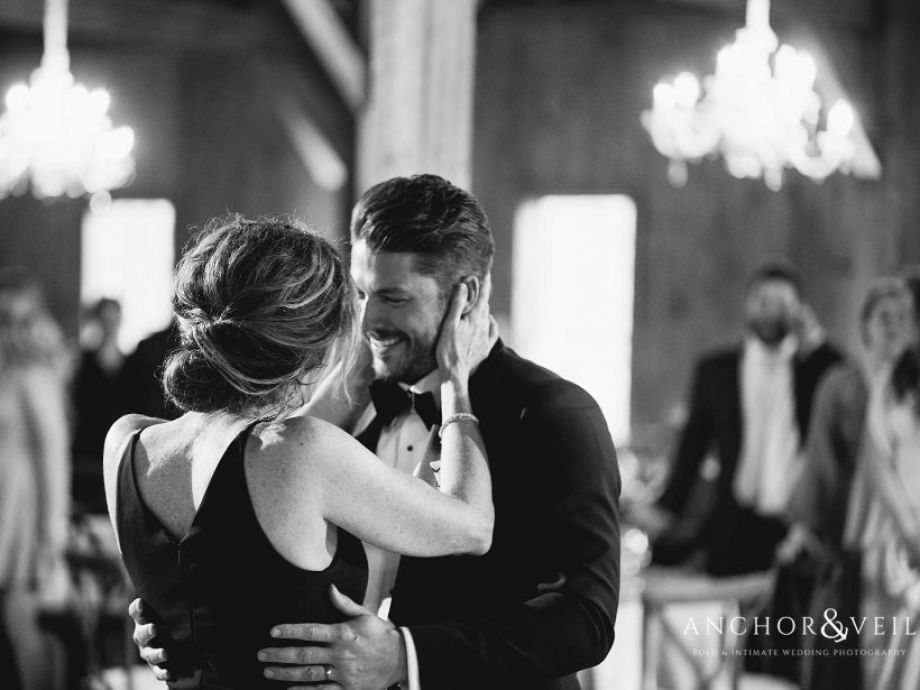 Time now for a little Charleston wedding playlist refresher when it comes to the all-important and very special mother-son dance. In case you missed my previous posts about the mother-son dance, I made mention that this is actually a rare occasion that the groom's mother gets into the spotlight at Charleston weddings. This dance was not a tradition like the Father / Daughter dance, and has grown in popularity over the past several years. This dance, along with the father-daughter dance are often difficult choices that sometimes can take many weeks to decide upon.  While the groom and his mother can certainly plan to do a nice and fancy choreographed dance, it's been my experience that these songs for these special dances are more about "lyrics" and actually have a deeper meaning than fancy dance moves. The groom and his mother should think about their relationship when selecting their song. Maybe it was a song that you remember as a child as you were growing up? It's those types of songs that can conjure up some very deep emotions during your wedding reception and may cause tears to fall by your guests.

While this is one of the most special moments at your wedding reception, try not to put too much pressure on yourself to pick the absolute perfect song. In the months and weeks leading up to your wedding reception, take some time to sit down or talk with your mother to discuss which song you'd like to dance to.  Don't stress over the selection of this song, because more "stress" is the thing you want to avoid on what will  become one of the happiest and best days of your life. If it makes you even more comfortable, sign up for some dance lessons to learn some simple dance moves. This list of songs includes a few of the traditional mother-son dances seen at Charleston weddings, as well as more modern songs. Enjoy this list compiled from one of the best Charleston wedding DJs, Mike Bills Entertainment. Find me on Spotify  at DJ Mike Bills to check out all my selected wedding playlists for all the special moments of your big day. You can also click the title of each song down below to open up a You Tube window.

"The Best Day" | Taylor Swift | 2008
"The Best Day" might be one of the best Taylor Swift songs that you have never heard before.  You'll find this song on her second album "Fearless", which was released back in 2008. Taylor discusses the huge role that her mom has played in her life.

"If I Didn't Have You" | Thompson Square | 2012
This was the first single off their 2012 album "Just Feels Good". The song would eventually go all the way to Number 1 on the Billboard country charts.

"I'll Stand By You" | The Pretenders | 1994
It's hard to believe it's been nearly a quarter century since the release of this wonderful song by The Pretenders in the summer of 1994.  The song would hit as high as Number 16 on the Billboard Hot 100, but remains in heavy rotation on adult contemporary stations all over the country.

"Beautiful Boy" | John Lennon | 1980
This song was written for John Lennon's son, Sean, who was born in 1975. It appeared on his album "Double Fantasy", which was released just weeks before his death in December 1980.

"Just To See You Smile" | Tim McGraw | 1997
You can find this lovely song by the great Tim McGraw on his 1997 album "Everywhere". It's no surprise that this song went all the way to Number 1 on the Billboard country charts. Perfect for a mother-son dance at your Charleston wedding over at Alhambra Hall in Mt Pleasant or the Historic Rice Mill in downtown Charleston.

"Days Like This" | Van Morrison | 1995
Van Morrison and his music are in constant, heavy rotation at weddings all over Charleston.  Van Morrison actually does one of my favorite love songs of all time; "Have I Told You Lately" from 1989. You might remember "Days Like This" from the soundtrack of the movie "As Good As It Gets" from 1997.

"Sweetest Devotion" | Adele | 2015
"Sweetest Devotion" appears on Adele's album "25", which was released in November of 2015.   The song was written about her son Angelo, and actually features vocals from him in portions of the song.  It's a beautiful, more modern choice for the mother-son dance at your Charleston wedding.

"Mom" | Meghan Trainor | 2016
If you and your mom are looking for a modern, upbeat, and fun mother-son dance song, this might be the perfect choice.  The song appears on Meghan Trainor's album "Thank You" from 2016 and also features her mom, Kelli Trainor.

"Fields Of Gold" | Sting | 1993
Dang! It's hard to believe it's been a quarter century now since the release of "Fields Of Gold", back in the spring of 1993. You can find the song on his album Ten Summoner's Tales. The song made it all the way to Number 2 on the soft rock (adult contemporary charts).

"Teach Your Children" | Crosby, Stills, Nash & Young | 1970
Written by Graham Nash, you can find this folksy classic on the album Deja Vu. The song would break into the Top 20 during the summer of 1970.

"You've Got A Friend" | Carole King | 1971
This song was originally written by Carole King and was featured on her album "Tapestry" in 1971. James Taylor would also release a version of the song in 1971 that would make it all the way to Number 1 on the Hot 100, as well as Easy Listening charts.

"My Wish" | Rascal Flatts | 2006
Released in August of 2006 from their album "Me And My Gang", the song would become one of their big crossover hits making it to Number 13 on the adult contemporary charts  around Christmas of 2006.

"I Will Be There For You" | Michael W. Smith | 1992
From his album "Change Your World", this song was released in the Fall of 1992 and would spend a few weeks at Number 1 on the Adult contemporary chart. The perfect song for a groom and his mom for a wonderful Charleston wedding out at Kiawah Island Resort or the Pavillion at Pepper Plantation.

"Do I Make You Proud" | Taylor Hicks | 2006
Here's another more modern choice for mother-son dance at your reception by another singer who appeared on American Idol. Taylor Hicks was the winner of the 5th season in the spring of 2006. This song was released in June of 2006 and would go all the way to Number 1 on the Billboard Hot 100.

"Mama" | The Spice Girls | 1997
This song appeared on the Spice Girls debut album "Spice", released in Novembe rof 1996. "Mama" was released as a double A-side in March of 1997, but was far more successful in England.

"My Mother's Eyes" | Etta Jones | 1977
If you and your mother are fans of jazz, this might be the perfect song for you. This was the title track of her 1977 album. Etta Jones is a native of South Carolina, born in Aiken in 1928.

"I'll Always Love My Mama" | The Intruders | 1973
If you and and your mom are into some soul music from Philadelphia from the early 1970s, you'll love this classic track from The Intruders.

"Thank You Mom" | Good Charlotte | 2009
The perfect song if you'd like a bit of "pop-punk" in your mother-son dance. You can find this track on Good Charlotte's self titled debut record.

"Into The Mystic" | The Wallflowers | 2003
The Wallflowers do an incredible job on  this Van Morrison classic. You can find this version on the soundtrack of the movie American Wedding back in 2003. You can certainly choose the original version by Van Morrison, but the Wallflowers covered this one very nicely.

"I'll Have To Say I Love You In A Song" | Jim Croce | 1973
Released after his death in 1974, this song would hit Number 1 on the adult contmeporary charts, as well as breaking into the Top 70 on the country charts.

"Mother Like Mine" | The Band Perry | 2013
When I mentioned up above about "lyrics", this song happens to have some "perfect" lyrics. "Our mother is our personal hero".  This is a perfect modern mother-son dance with the most beautiful message about your mother. Be sure to sample the song down below and tell me what you think.

Wanna Set Up A Time To Meet With Mike About Being Your Charleston Wedding DJ?
I hope you enjoyed this newly updated and refreshed list of more modern song choices for your mother-son dance at your Charleston wedding. After reviewing this post, I just realized there is a excellent mix of music on here, both old and new. Thank you for making it to the end of another one of my blog posts. It really means a lot to me. Feel free to look over the rest of my blog for even more compelling content designed to help you create the best soundtrack for your big day, and the find the best wedding DJ. Creating soundtracks for weddings and events is one of my true passions. If you are recently engaged and looking for one of the best Charleston wedding DJs to hire and choreograph your perfect day here in Charleston with only the best mix of music, click HERE to tell me a little bit about your big day. Mike Bills Entertainment is also available for private parties, 80s parties, and corporate events, as well as Christmas parties.