20 Most Requested Songs For Your Christmas Or Holiday Party

December is here and that means things are really starting to cool off here in the Holy City.  The past few December's have seen some unusually warm weather here in Charleston, but unfortunately this year we seem to be chilly and a bit on the wet side. If you are like me and need to wait until after Thanksgiving to put your Christmas tree up and hear those popular Christmas songs for the first very time, this is the perfect post for you.  It's beginning to look a lot like Christmas around the Holy City these past few weeks. The Christmas Tree Lighting was held down at Colonial Lake about a week ago and it was quite the sight.  The holiday decor is lining the streets of Charleston.  The Christmas season has arrived in Charleston.  Even in the Number 2 wedding destination in America, the Fall wedding season transitions into a season of wonderful parties and social events around the city.  Corporate parties, as well as office parties are held at some of the most popular wedding venues like the South Carolina Aquarium and the Francis Marion Hotel. Back in August,  I published a post that offered 5 Tips On Finding The Best DJ For Your Christmas Party. Feel free to click back over if you need a refresher.  For now, one of the best Charleston wedding DJs is going into Christmas mode to spread some yuletide cheer for your Christmas parties.

Download These Christmas Song Selections From Spotify Right NOW
Having a tough time deciding which songs to add to the playlist for your upcoming Christmas party? Wanna download the songs you see on this post and take a listen now? Head over to Spotify right now and search for DJ Mike Bills.  When you head over to Spotify, you'll also see a ton more playlists for all things weddings too. Check out this playlist down below or if you are not into Spotify, you can click on the title of each song in this post and be taken over to the You Tube to listen.

"Christmas Time Is Here" | Vince Guaraldi Trio
This particular version of the song is purely an instrumental version. It sets the mood for socializing and dinner conversation and having some adult beverages with friends.  If you are a fan of A Charlie Brown Christmas, you can also feel free to substitute that version into this playlist as well.

"White Christmas" | Bing Crosby
Originally recorded and released in 1942, the song appeared in the movie Holiday Inn and would hit Number 1 on the charts in October of the year.  It's the  best selling single of all time, selling over 100 million copies.

"Have Yourself A Merry Little Christmas" | Frank Sinatra
Frank Sinatra is a staple on Charleston wedding playlists during dinner during my receptions, and your dinner at your Christmas party is perfect for Sinatra and his wonderful voice singing Christmas classic.

"Celebrate Me Home" | Kenny Loggins
Long before "Footloose" and "Danger Zone", Kenny Loggins released a solo record in 1977 after leaving Loggins & Messina.  Over the past 40 years, the song has become a popular Christmas song because of the opening line "Home For The Holidays". 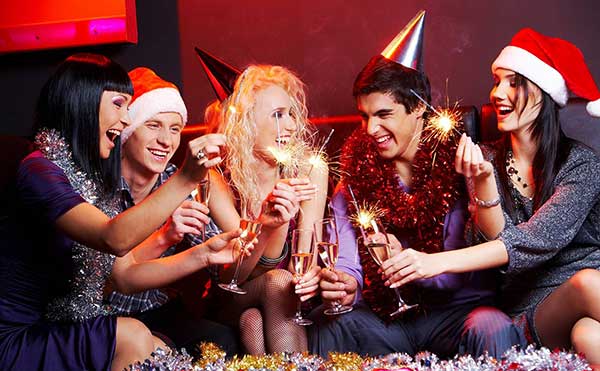 "Last Christmas" | Wham
Christmas won't be the same for fans of Wham & George Michael. His death back on December 25, 2016 is still very fresh in our minds.  Released right before Christmas of 1984, the song would reach Number 1 in Sweden, Belgium, the Netherlands, Italy, Norway, and the United Kingdom.

"It's Beginning To Look A Lot Like Christmas" | Michael Buble
You can find this wonderful cover on Michael Buble's Christmas album from 2011.  He did an excellent job at this classic Bing Crosby song.

"Blue Christmas" | Elvis Presley
Written by songwriters Billy Hayes & Jay Johnson, Elvis Presley would make this song the most popular, being released on his 1957 Christmas album.  The song would also be covered by Michael Buble, Kelly Clarkson, and Blake Shelton. For Indie music fans, the song was also covered by Bright Eyes.

"Please Come Home For Christmas" | The Eagles
Originally released back in 1960 by Charles Brown, the Eagles would release a cover of the song as a single before Christmas 1978. The song would crack the Top 20. 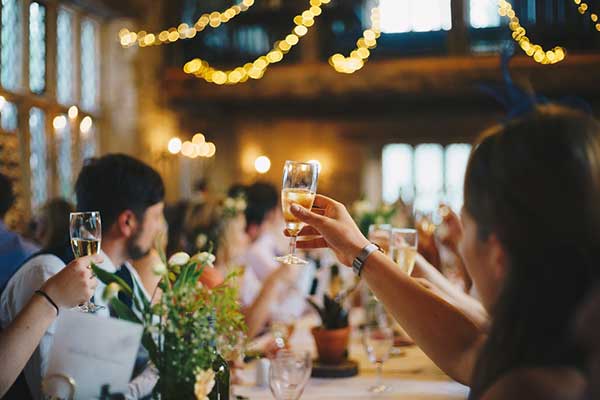 Upbeat And Festive Christmas Songs For After Dinner

"Step Into Christmas" | Elton John
"Step Into Christmas" can be found on Elton John's 1974 album "Caribou". The album also features his other hits, "The Bitch Is Back" and "Don't Let The Sun Go Down On Me".  It was hearing this song that actually inspired me to put together a post about some of the most popular Elton John songs heard at Charleston weddings. Check out that post right here

"Do They Know It's Christmas" | Band Aid
Originally released right before Christmas in 1984,  Band aid featured the likes of Bono, George Michael, Paul Young, John &Riger Taylor, Boy George, as well as other members from British and Irish musical groups.

"I Saw Mommy Kissing Santa Claus" | John Mellencamp
The song dates back to the early 50s with Jimmy Boyd singing it first. The Jackson 5 would record a very popular cover of the song, as well as John Mellencamp with this track from 1987.

"All I Want For Christmas Is You" | Mariah Carey
Released just in time for the Christmas of 1994,  this song has become a Christmas staple on the radio.   The song hit radio in early November 1994 ahead of the release of her first Christmas album. She also recorded the song with Justin Bieber in 2011 for his Christmas album "Under The Mistletoe" 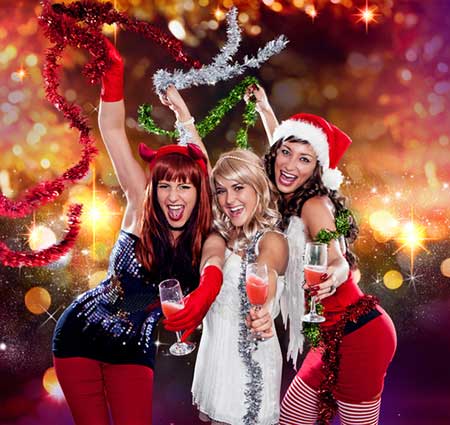 "Wonderful Christmastime" | Paul McCartney
Written and released in late 1979, the song did fairly well in the UK, but did not chart in the United States. Over the years, the song would grow in popularity reaching the Top 10 on the Billboard Christmas charts for Christmas 1984.

"Christmas Wrapping" | The Waitresses
The Waitresses were in rotation during the very early years of MTV. You can find this new wave Christmas song on their album "Wasn't Tomorrow Wonderful?" That album also featured their hit "I Know What Boys Like"

"Winter Wonderland" | The Eurythmics
Released in 1987, the Eurythmics cover of this classic is one of the most recognizable. You can find it on "A Very Special Christmas Vol 1", released back in 1987. The album also featured Christmas songs sung by the likes of U2, Run DMC, Stevie Nicks, and Madonna.

"Rockin Around The Christmas Tree" | Brenda Lee
This might be the perfect song to throw on after dinner. Grab your partner after you've exchanged a few kisses under mistletoe. For a faster version of this song, you might check out the cover that Miley Cyrus did.

"Santa Baby" | Madonna
Christmas just isn't Christmas without Santa Baby.  Eartha Kitt made it a hit in 1953. Madonna would do a wonderful cover back in 1987.  It's the perfect, yet fun slow dance with that person you've been hanging out with under the mistletoe all night after raiding the egg nog. 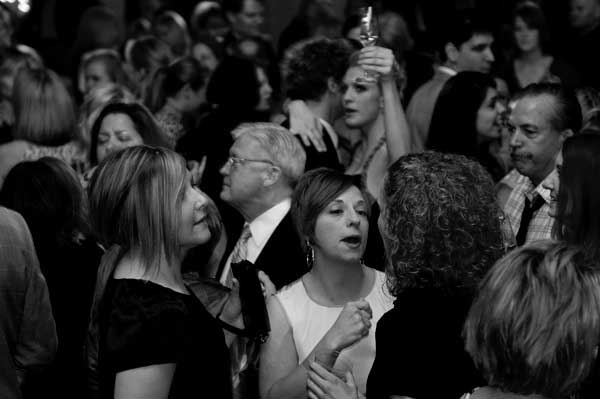 Wishing You And Your Loved Ones A Joyous Holiday Season!
Hope you enjoyed this playlist of some of the big requests I've seen for Christmas parties this season, as well as the past several years.  If your company is financing a Christmas party for you, by all means you need to go! I remember hearing in recent years that parties had been cut from budgets, but they have returned in recent years. If you aren't the person organizing the music for your corporate or office Christmas party here in Charleston, be sure to forward this page over to the person who will be hiring the DJ.

Christmas Time Is Approaching: Will You Be Popping The Question This Year?
As I've mentioned in previous posts, over 40% of engagements occur between Thanksgiving and Valentine's Day.  It's such a magical and festive time of the year to propose to the one you love. If you already have a spot in mind or a favorite fine restaurant, congratulations in advance! And of course, I hope she says "yes". If you'd like to create a magical soundtrack for that beautiful moment, be sure to check out this post for some Great Proposal Songs in Charleston

Already Engaged And Looking To Secure Mike As Your Charleston Wedding DJ?
Congratulations on your engagement and your decision to get married in one of the most romantic cities in the world! Charleston is the Number 2 Wedding Destination in the country and continues to grow in popularity. If you are looking to get married in 2019 or 2020 here in Charleston, be sure to click HERE to set up a consultation with one of the best Charleston wedding DJs.  I look forward to setting up a time to talk with you to find about your vision for your Charleston wedding.