Where do I start? The first dance song. So many choices come to mind. The spotlight is on the bride and groom. Cameras are flashing. Video is rolling on every single smartphone at your wedding reception. They ALL want a glimpse of one of the most special moments of the biggest day of your life. I've blogged about first dance songs plenty of times before, but I thought I would employ my sister company, Mike Bills Productions into the mix (no pun intended) and produce a more interactive sampling of some of my picks for your first dance song. Some of the songs selected here today have been very popular choices by past Charleston brides and grooms and some are not so popular and don't even appear in any of the major song lists on the major wedding sites like The Knot or Weddingwire. Please, get your headphones ready and take a listen. Take some notes and at the end of the day, choose a song that is all about you and your love for each other. Down below are a listing of the songs in order as they appear on the audio.

1. "I Don't Want To Live Without You" | Foreigner  As I mentioned in my voiceover piece, by the end of 1987, Foreigner had more or less morphed into a soft rock or adult contemporary band, thus leaving their hard rocking 70s classic rock sound in the rear view mirror. The unmistakable vocals of lead singer Lou Gramm create an awesome power ballad for him and her. With lyrics like "Girl I want you now and forever, close to me", how could you go wrong?

2. "Make You Feel My Love" | Adele | It's hard to believe that we are approaching 10 year since Adele's debut record. Released as the fourth single off "19" in October 2008, it reached the Top 10 on the UK singles chart.  Originally written by Bob Dylan, Adele's version was used in the movie "When In Rome" back in 2010.

3. "Stand By Me" | Ben E King | A wedding classic from 1962 by the great voice of Ben E. King has not only been the soundtrack to many many first dances, but also lots and lots of father / daughter dances. John Lennon covered it, as well as 400 other artists, including Florence & The Machine.

4. "A Thousand Years" | Christina Perri | An instant classic off the album "The Twilight Saga: Breaking Dawn - Part 1". Another one of those songs commonly used for wedding ceremonies in Charleston, the Piano Guys released a cover in 2012.

5. "Obsessed" | Dan & Shay | Released in 2016, this is the newest of songs that appear on this compilation. When you listen to the lyrics you'll see why I added it in. Perfect for the bride and groom who are so very much into each other. Couples who are obessed with each other.

6. "Thinking Of You" | Ed Sheeran | Nothing much more I can say about Ed Sheeran's instant wedding first dance song classic, but if you should want to use it, I urge you to take some dancing lessons from a professional dance instructor. Watch the music video and you'll see what I mean.

7. "At Last" | Etta James | Ray Anthony from the Glenn Miller Orchestra made this a Number 2 song on the Billboard pop charts in 1952, but it was Etta James who allowed it to become a classic in 1960. Cyndi Lauper, Martina McBride, and Celine Dion have also made great covers.

8. "Can't Help Falling In Love" | Elvis Presley | Of course, the king of rock and roll has to make an appearance on this list. This classic was released in 1961, and easily is one of the most popular slow dance songs at any wedding reception.

9. "Collide" | Howie Day | "Even the best fall down sometimes, Even the stars refuse to shine, Out of the back you fall in time, I somehow find, You and I collide. Not showing up on any of the major wedding site, I found this to be a great addition in any bride and groom's research for their first dance song.

10. "How Sweet It Is" | James Taylor | Originally recorded in 1964 by the late Marvin Gaye, James Taylor knocks it out of the park with a cover on his album "Gorilla" in 1975. For those who need a nice cake cutting song, this is a popular one for that portion of the evening as well.

11. "Lucky" | Jason Mraz & Colbie Caillat | The third single to break from his 2008 album "We Sing. We Dance. We Steal Things.", Jason Mraz teams up with the very lovely and talented Colbie Caillat for a truly beautiful love song. Look it up on You Tube for your wedding reception and first dance over at the Daniel Island Club.

12. "All Of Me" | John Legend | It's hard to believe that as I write this post in the summer of 2017, that we are coming up on 4 years since the release of this instant wedding reception classic. Not only is it a great first dance, but it's also been used for a contemporary piece of music used in many wedding ceremonies around Charleston. In 2014, it became the second biggest selling single with close to 4.7 million sold.

13. "You Are" | Lionel Richie | An upbeat ballad released in 1982, this is a forgotten romantic song from the early 80s. Take a listen to it and see if you can find 80s heart-throb Richard Marx singing on the background vocals.

14. "Everything" | Michael Buble | A wedding reception recurrent since it came out now over 10 years ago in April 2007, Buble wrote this song for his girlfriend at the time. It's an absolute perfect addition to any wedding playlist or first dance, because no matter what's happening in your lives, your love will get you through.

15. "Unforgettable" | Nat King Cole | )One of the greatest love songs ever written. Cole's work spanned both the big band and jazz genres and spanned over three decades. In 1991, his late daughter Natalie Cole released "Unofrgettable...with Love", which covered a lot of father's work, including "Unforgetttable", which through the power of more modern recording technology was recorded as a duet between father and daughter.

16. "Come Away with Me" | Norah Jones | When Norah is added to any wedding playlist, her voice fills any room with love. Come Away With Me was third single released from the album of the same name. By January 2003, the album became number 1 on the strength of other singles like "Don't Know Why" and "Feelin' The Same Way"

17. "You Are The Best Thing" | Ray Lamontagne | I am having a hard time coming to terms that we are approaching nearly 9 years since the release of this instant wedding classic. It hit Number 5 on the Adult Alternative charts and even if you don't care to use it for your first dance, throw it on the must play list.

19. "That's Where It's At" | Sam Cooke | Very few weddings have absent from the playlist the King Of Soul, Sam Cooke. Released in 1964, the song was also covered by Van Morrison, Ray Charles, and Bobby womack, as well as others.

20. "Maybe I'm Amazed" | Paul McCartney | In my humble opinion, one of the greatest love songs ever written by the ex-Beatle. It was originally released in 1970, but it wasn't until he formed his band Wings and released Wings Over America in 1976 that the song became a top ten hit in the United States. I've always been a much bigger fan of this LIVE version. 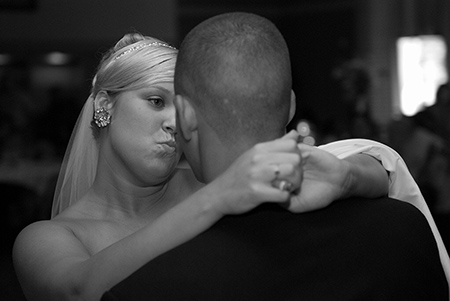 Ready To Talk To Mike About Being Your Wedding DJ?

Aren't they beautiful? Well, you've got some homework to do. :)  Take a listen to this montage of some of my picks for first dance song as many times as you like. This is only a brief sample and a lot of the choices are based on the romantic and loving nature of the lyrics. While music has always moved me in the DJ booth, as well as the dance floor, the lyrics of many love songs have hit me just as hard.  The 2018 wedding season is right around the corner and if you are a recently engaged bride or groom and are in the search for a true professional wedding DJ for your upcoming Charleston wedding, click the link up above and you'll be taken over to my contact form so that you can fill out all the important details of your big day, and we’ll schedule a time to touch base and discuss the musical journey that begins when you hire Mike Bills Entertainment .