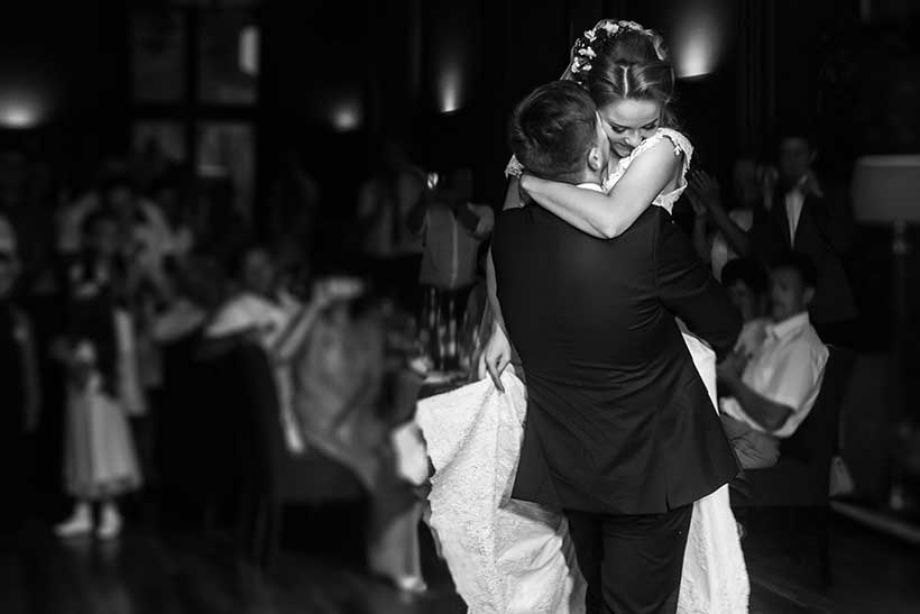 Modern brides and grooms getting married in Charleston in 2018 might just be trending away from a lot of the normal overplayed wedding standards you've come to expect at any and all weddings. Your first dance song is one of the most special moments of your entire wedding day and the song that you choose should be romantic and set the stage for what will be the most memorable night of your lives. In a future blog post, I was going to spotlight some of the wedding standards and classics that will likely live on forever at Charleston weddings. While some of those are still used for first dances, and most likely will continue to be used for the foreseeable future, more and more couples are looking to "wow" their guests with something different when they take to the dance floor for their first dance. Trust me, you will want to read on with this post. There are some awesome songs on this list.

For the purpose of this post, most ALL of the songs chosen for thist list were released within the past 5 - 10 years, and some are currently still being played on the radio. Thank you to Ed Sheeran for continuing his streak of modern wedding dance classics that will probably still be heard at weddings in 20 years. Speaking of "hearing", let's get down to business. For even more songs than what you'll see and hear on this post, be sure to click over to the Client Area and test drive the online tools that you'll be provided once you book your Charleston wedding DJ with my company.  Also, as you go through this list, keep tabs on all the excellent covers to some of the classic wedding songs.  Be careful though! Logging in and sampling all the music online becomes and addiction with most all of my couples.

Listen To All These First Dance Selections By Downloading Them From Spotify.
The moment you do your first dance is one of the most special times during your wedding reception. If you are having a difficult time choosing your song, please head over to my Spotify and download this laylist right now so that you listen to these songs in their entirety. Your first dance song is a song that should not be taken lightly.  Find me on Spotify by searching for DJ Mike Bills. If by chance you are not into Spotify, you can browse through this post and pull up each song on You Tube by clicking on the link in each song title. While at my Spotify, you'll also find many other wedding playlists created by me and designed to give my clients inspiration when choosing the music for their wedding.

"Perfect" | Ed Sheeran | 2017
Would it sound cliche or corny if I said this song was "perfect" for your wedding? Well, I'm gonna say it again. It's the "perfect" song for your first dance song or even a nice slow dance at your upcoming Charleston wedding.

"Love" | Lana Del Rey | 2017
From her album "Lust For Life", this song was released back in February of 2017, and was ranked the 28th greatest song of the year by Pitchfork. It's a great modern first dance song for your wedding over at Kiawah Island resort or the Historic Rice Mill.

"Coming Home" | Leon Bridges | 2015
Leon Bridges just had his sophomore release come out over the past few months that I am still blown away at, but this song from 2015 has that Motown flavor that I can't seem to get enough of.

"One And Only" | Adele | 2011
This is the 9th track on Adele's 2011 release "21". You might not remember it because it did not get released as a single.  Take a listen and you'll see why you might choose it for your first dance song.

"Love Me Like You Do" | Ellie Goulding | 2015
You might remember this song from the soundtrack to the movie "Fifty Shades Of Grey" back in 2015.  It went all the way to Number 3 on the Billboard Hot 100 and was the second single to be released off the soundtrack.

"Say You Won't Let Go" | James Arthur | 2016
It was originally released digitally over in England in September of 2016, and eventually went all the way to Number 11 on the charts here in America. It's a beautiful song that I promise will grow on you :)

"First Of My Life" | Bright Eyes | 2005
For those modern couples having their wedding in Charleston who are into their Indie and alternative music, you'll love this song. Mike Bills Entertainment is a wedding DJ in Charleston who has a large collection of modern Indie selections.

"Sea Of Love" | Cat Power | 2000
Cat Power is the band of  Indie singer Chan Marshall. Back in 2000, she released a covers record.  "Sea Of Love" was originally recorded by Phil Phillips in 1959, and made popular back in the 80s by The Honeydrippers.

"History In The Making" | Darius Rucker | 2009
This was actually the first song written and recorded by Darius Rucker that went to Number 1 on the country charts. Check out this blog post for a Michigan couple who got married here in Charleston because of their love of Hootie & The Blowfish. Click HERE for that post.

"From The Ground Up" | Dan & Shay | 2016
One of the best "modern" country songs that I have heard in recent years, that is a "perfect" choice for the first dance song at your Charleston wedding.

"Heaven" | Megan Nicole Featuring Boyce Avenue | 2012
I just discovered this song in recent weeks as one of my recent couple's chose this Bryan Adams cover for their cake cutting song. They thought it might be too slow for their first dance, but after listening to it a few more times, I think it would be perfect for your first dance.

"Can't Help Falling In Love" | Ingrid Michaelson | 2008
Ingrid did an excellent job on this Elvis Presley classic. Take a listen to it below and tell me what you think.  You can check it out on her 2008 album "Be OK"

"Lucky" | Jason Mraz & Colbie Caillat | 2009
It's hard to believe it's been 10 years since the release of Jason Mraz's album "We Sing. We Dance. We Steal Things". This was the third single to break it from the album and this track featured the very lovely Colbie Caillat.

"The One" | Kodaline | 2015
That same couple I mentioned above who used the Bryan Adams cover of "Heaven" for their cake cutting song used this song for their first dance song. It's a great song! Take a listen to it down below.

"Dance Me To The End Of Love" | Civil Wars | 2011
Americana band "The Civil Wars" did an excellent job covering this 1964 Leonard Cohen classic. It's got a perfect vibe for your first dance. Tell your Charleston wedding DJ (me) to add it into your playlist.

"Like I'm Gonna Lose You" | Meghan Trainor & John Legend | 2015
This was a great duet released in the summer of 2015 from Meghan Trainor's first record "Title". It went all the way to Number 8 on the Billboard charts, and has been showing up on Charleston wedding playlists since it's release.

"One Call Away" | Charlie Puth | 2015
This was the second single from his debut album "Nine Track Mind" after his hit "Marvin Gaye". Released back in the summer of 2015, "One Call Away" would peak at Number 1 on the Adult Top 40 chart.

"I Choose You" | Sara Bareilles | 2014
Released back in the winter of 2014 from her 4th album "Unrest", it's a great choice for a modern upbeat first dance song at your Charleston wedding.

"Grow Old With Me" | Tom Odell | 2013
This song was the 4th single from Tom Odell's first album "Long Way Down". It was unreleased in the United States, so take a listen by c,icking the link in the song title.

"How Does A Moment Last Forever" | Celine Dion | 2017
Celine Dion did an amazing job on this song for the 2017 release and remake of "Beauty & The Beast".  It's a great song to consider because your first dance at your Charleston wedding is a moment that you will want to last forever.

"Latch" (acoustic) | Sam Smith | 2013
Sam Smith did an excellent job on this acoustic version of the original version released with Disclosure back in 2012.

"A Thousand Years" | Christina Perri | 2011
From the soundtrack of The Twlight Saga: Breaking Dawn - Part 1. Need I say anymore? If not for your first dance, it's a great song for the pre-ceremony at your Charleston wedding ceremony.

"Someone Like You" | Paolo Nutini | 2014
Paolo Nutini's album "Caustic Love" was his third album released in the spring of 2014 and did very well over in Ireland and Scotland, but only managed to make it to Number 31 on the charts in America.

"God Only Knows" | John Legend & Cynthia Erivo | 2017
Here's another one of those great covers!  It's quite a bit different than the more upbeat original version by The Beach Boys.  But, it's slow enough to use for the first dance and for you to rehearse a special dance for it. It's a refreshing cover that is getting some pretty big spins at Charleston weddings since it's release in 2017. Get your DJ to add into your playlist.

Interested In Hiring Mike To Be Your Charleston Wedding DJ?
Thank you once again for making it to the end of another one of my blog posts. Hope this list gives you some great ideas on what you'd like your first dance song to be. Remember, the music for your Charleston wedding should be tailored around your likes and dislikes.  Your Charleston wedding DJ will help you and give you suggestions on your wedding music. That's actually the purpose of this blog, and since you've made it to the end of another blog post, you've managed to get lost in my musical world. Music is one of the biggest reasons why I love to wake up every day and work with beautiful couples like you who are getting married in one of the most beautiful cities in the world. If you are recently engaged or planning a wedding in Charleston later this year or in 2019 or 2020, let's talk soon. Click HERE to tell me a little more about your special day and tell me some of your favorite types of music. I love talking music with newly engaged couples.