The beginning of my Charleston wedding season happened back on March 1, and on this sunny, pleasantly cool Easter morning in in the Holy City, we are still very much in the midst of the Coronavirus pandemic. Sadly, no one knows when this terrible nightmare will be over. Over the past month, our news feeds on all of our social media have been filled with so much negativity that we all seem to be looking for "just" a glimmer of hope that we will eventually get through this.  During the course of this downturn that has halted ALL weddings in Charleston for the spring, and for the foreseeable future, I've been hard at work refreshing a lot of the content on my blog.  At the end of this past Friday afternoon (which was the end of another negative week), I received an email from the photographer about photos from my first wedding of the year, over at Alhambra Hall, one of the most requested Charleston wedding venues.  Immediately when I opened the email and went over to catch a glimpse at how the photos turned out, my frown turned into a smile. I was immediately taken back to that brisk and sunny Sunday afternoon at Alhambra Hall, where Ripley and Alaina would be married with their family and closest friends nearby to see their love.

I continued to look over the images of Ripley & Alaina's most special day, and I was instantly reminded of their love and just how perfect the day was. I had not known Ripley & Alaina for that long. They had booked me back in the latter part of January, and were very lucky to get one of the most sought Charleston wedding venues in Alhambra Hall on this particular Sunday. But like the story that spans most of a quarter century of how they got to exchange vows on March 1, 2020,  it was ALL meant to be.  Ripley and I had a brief exchange over the phone while they were booking their wedding vendors and he mention about him and Alaina's love for 80s music.  I told Ripley that 80s music is the one era of music that I am the most well-versed and experienced in.  As one of the top Charleston Wedding DJs, I've had prospective brides and grooms talk about 80s music and how they love it, but none of them would put the effort into making their playlist one that is truly from that decade of decadence like Ripley & Alaina did.

As I do with ALL of my clients, they are created a convenient portal on my website where they have the freedom to log in at any time to begin picking and choosing the music for their wedding day.  Playing the music that my clients want and not going off on a tangent is one of the ways I've become so successful as a wedding DJ. It's an easy formula. It's YOUR wedding day, so that music should be all about YOU.  In the days and weeks leading up to a couple's wedding, I generally log in and see just what they are selecting, to get a feel on how the night is going to go.  The first time that I logged in to see what initial selections Ripley & Alaina had made for their wedding day, I was blown away. I was so blown away that I could not wait to meet them, which I ended up doing 2 weeks out.  No matter the situation, whether the couple is local or destination, I make it a point to meet with them before their wedding day.   One of the things I  love to do with my clients is talk about music with them. When I met Ripley & Alaina for coffee on a Saturday morning, we did just that and then some. Meeting a couple allows me to get any questions answered that I may have had on a name, something on their timeline, or song selection.

Let's get to this love story that is set to unfold on March 1, 2020. It was a typical March day in Charleston. Temperatures were a little cool in the upper 50s with a light breeze down under the oak tree overlooking the harbor where couples are married at Alhambra Hall. Ripley & Alaina had hired me to provide their PA during the wedding ceremony, while they hired ceremony musicians to play all the musical parts of their ceremony. 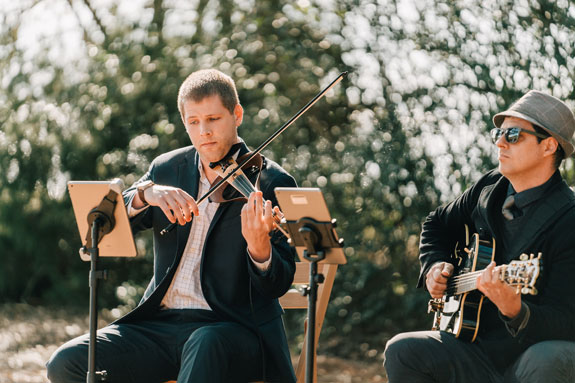 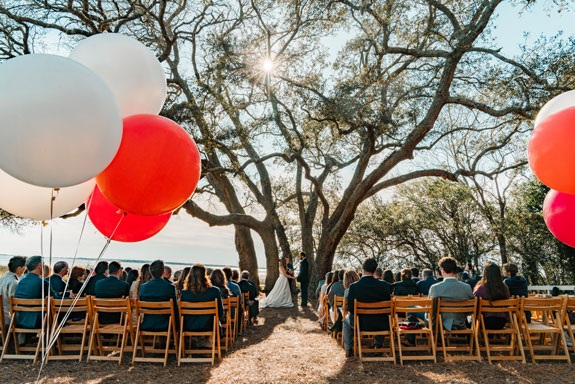 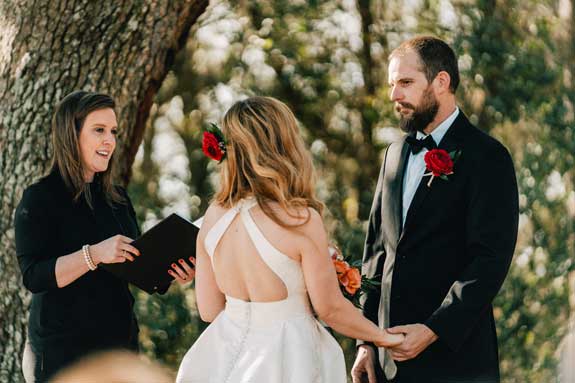 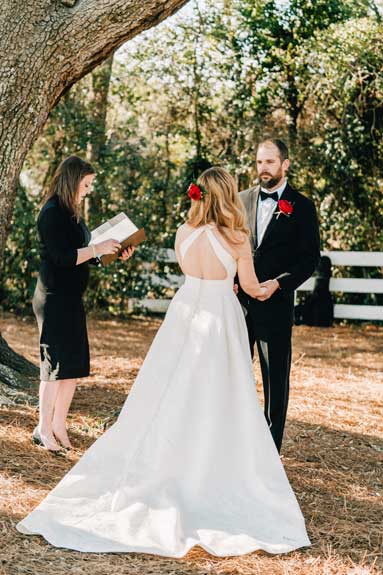 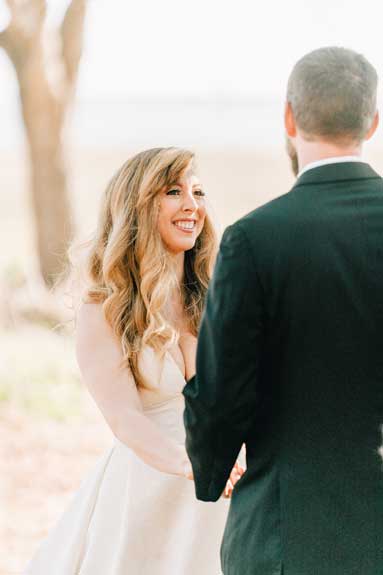 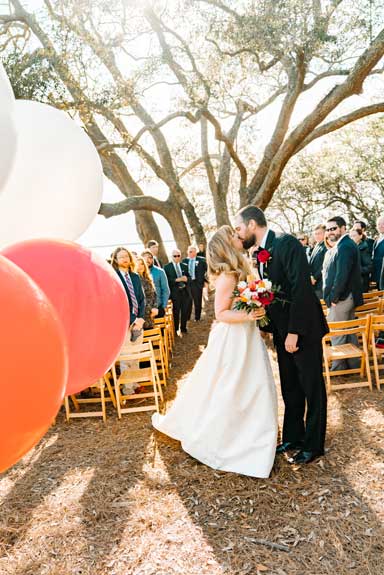 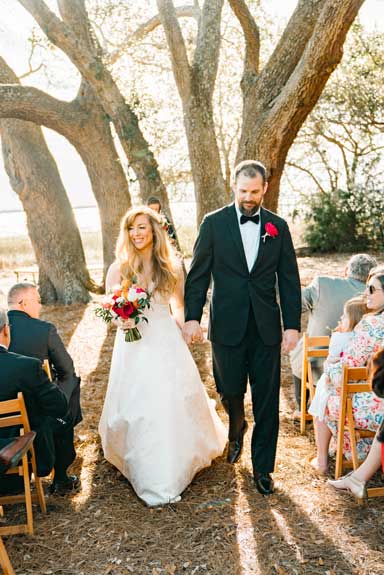 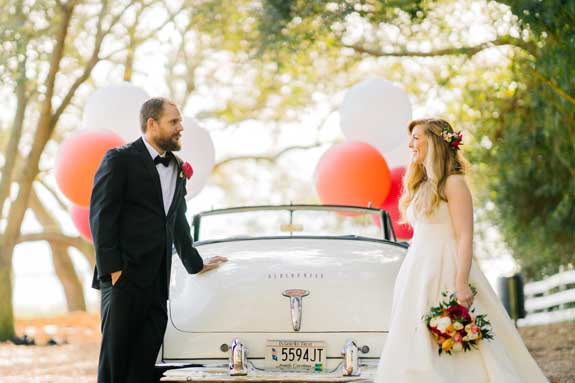 Ripley And Alaina's Cocktail Hour Music Selections
After the ceremony, guests moved inside for cocktails, while Ripley & Alaina get some photos made overlooking the beautiful backdrop of Alhambra Hall right on the harbor. Cocktail hour selections consisted of mostly a set of the best Motown songs, as well as some other most requested wedding songs, including classic soul.
Song Selections For Cocktail Hour
"I Second That Emotion" | Smokey Robinson & The Miracles
"Come See About Me" | The Supremes
"I Want You Back" | Jackson 5
"I Only Have Eyes For You" | The Flamingos
"Be My Baby" | The Ronettes
"How Sweet It Is (To Be Loved By You)" | Marvin Gaye
"You Keep Me Hanging On" | The Supremes
"Baby I Need Your Loving" | The Four Tops
"Shotgun" | Junior Walker & The All-Stars
"This Old Heart Of Mine [Is for Weak For You]" | The Isley Brothers
"Rock With You" | Michael Jackson
"Papa Was A Rolling Stone" | The Temptations
"Lovely Day" | Bill Withers
"Come And Get Your Love" | Redbone
"Cruisin" | Smokey Robinson
"Over The Rainbow / What A Wonderful World" | Iz

The Introduction Of The Kings: Ripley & Alaina
As cocktail hour wrapped up, the happy bride and groom got finished and were ready to be introduced for the first time as husband and wife. I cued up the chorus of Stevie Wonder's "Signed, Sealed, Delivered".  After a brief welcome by Alaina's father, we moved into dinner, which consisted of a lot of soft rock songs from the 80s, as well as other 80s and 90s power ballads. 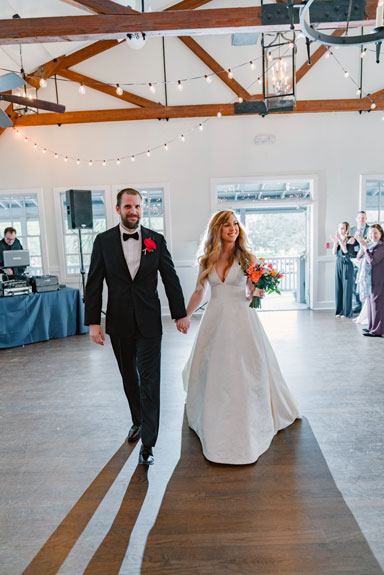 Dinner Music Selections
"The Search Is Over" | Survivor
"Dog Days Are Over" | Florence & The Machine
"What You Won't Do For Love" | Bobby Caldwell
"Hungry Eyes" | Eric Carmen
"What About Love" | Heart
"Mrs. Robinson" | Simon & Garfunkel
"Tiny Dancer" | Elton John
"Who's That Girl" | Madonna
"Time After Time" | Cyndi Lauper
"In Your Eyes" | Peter Gabriel
"To Be With You" | Mr. Big
"Sweet Dreams (Are Made Of This)" | The Eurythmics
"You Can't Hurry Love" | Phil Collins
"Careless Whisper" | Wham
"Need You Tonight" | INXS
"Mary Jane's Last Dance" | Tom Petty
"Faithfully" | Journey
"The King Of Wishful Thinking" | Go West
"You Can Call Me Al" | Paul Simon
"Overkill" | Men At Work
"Shape Of You" | Ed Sheeran
"All Night Long" | Lionel Richie

As dinner time wrapped up,  there were a few toasts before Ripley & Alaina would cut their cake to the wedding classic "Unchained Melody" by The Righteous Brothers.

Ripley & Alaina's First Dance
Do you remember how I mentioned up above that Ripley and Alaina's music selections had made me smile? One of the things that most professional wedding DJs will tell you is that NO two weddings are the same. It's a truly beautiful thing when a bride and groom put a lot of thought into their first dance. This is exactly what Ripley & Alaina did. Keeping with their playlist theme (heavy on the 80s music), they chose a beautiful one-hit wonder song from the 80s.  When In Rome were a British band that were a part of a bit of an 80s British invasion in the mid - late 80s. In 1988, they would release "The Promise", which went on to be a part of a lot of popular 80s love song playlists on Spotify. The song would peak at #11 on the Billboard Hot 100, but had everyone in Alhambra Hall smiling as Ripley & Alaina danced to it in it's entirety. Click here to listen to The Promise on YouTube. 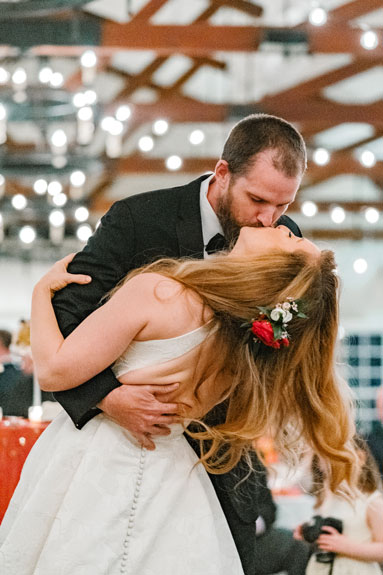 The Father / Daughter Dance
After their beautiful trip back to the 80s with the "The Promise" by When In Rome, Alaina would then do a dance with her very proud father. Alaina and her father would dance to "Up On The Roof" by The Drifters.  The father / daughter dance is always a very moment during the wedding reception between a bride and her father. Click here for some wonderful ideas for faither / daughter dances.

The Mother / Son Dance Song
After Alaina danced with her father to "Up On The Roof" by The Drifters, Ripley and his mother would dance to Dolly Parton's "I Will Always Love You". I met Ripley's mother before the ceremony and we were chatting about the party that was going to be unfolding and she told me she was looking forward to hearing some Michael Jackson and "Beat It".

Last Song Of The Night
Ripley & Alaina requested the last song of the night be "(I've Had) The Time Of My Life " by Bill Medley & Jennifer Warnes, which would be the third song off of the Dirty Dancing Soundtrack played during the evening. Right after the last song ended, everyone went outside in preparation for Ripley & Alaina to exit with a sparkler sendoff.  Ripley and Alaina's wedding day was the perfect way to kick off the spring wedding season, and while the Coronavirus would upend the entire spring wedding season a few short weeks later, putting this blog together has been a joy, and a reminder of just how different our lives a very short time ago.. It's also a reminder of how lucky I am to be able to work with such awesome couples.  Seeing a couple's wedding day play out with all it's special musical moments is what keeps me coming back for more.   Interested in talking with me about your Charleston wedding? Click HERE to tell me a little more about your big day. 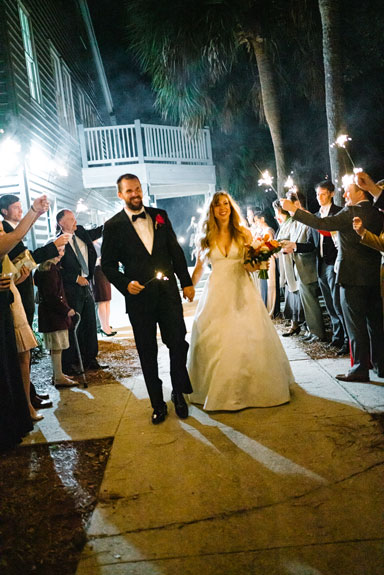