Charleston, SC is a top wedding destination in the country and for the matter, the world, for a wide variety of reasons. The accolades that the city has received have caused a tremendous growth in the amount of destination weddings being held in and around Charleston. Some brides and grooms come down here for the rich historical backdrop that the Holy City provides. Some brides and grooms come down here for the close proximity to the water in combination with the beautiful plantations that the area has. When you combine its rich history, Southern charm, exceptional food, and seasonal weather year-round, it's hard not to want to get married here in charming Charleston. If all of this is not enough to get you to book your flight right now and begin planning your Charleston wedding, how about one more thing? Would you believe that "music" is what brings some couples to the Holy City? Well, at least that's the draw that Erin & Alex had in coming here and getting married on a cool and blustery Veterans Day.

Erin & Alex came to Charleston by way of the great state of Michigan. They found each other while in school in the upper peninsula of Michigan at Northern Michigan university. At some point during their dating years, they found their way down to Charleston and grew to like Hootie & The Blowfish, having attended the annual homegrown show on Daniel Island 3 times.Click the link to check out a link to a blog of the Top Hootie songs played at weddings.  After their wedding ceremony over at Washington Square, they were escorted around town by Charleston Black Cab Company in a party bus and ended up at the Francis Marion Hotel inside the Colonial Ballroom for their wedding reception. It seems like yesterday that it was the summer of 1994 and Hootie's signature song "Hold My Hand" was all over the radio, as well as MTV with the video filmed in South Carolina.  For those of you who did not know, lead singer Darius Rucker grew up in Charleston and graduated from Middelton High School. It was ironic that the week Erin & Alex came into town for their wedding that Darius was in town helping out on a Habitat For Humanity house.  I had noticed the Hootie & The Blowfish songs on their playlist selections, but didn't think too much of it at the time. Truth be told, Hootie & The Blowfish have become a really likeable band over the years for many people from different areas of the country and it's not surprising to see them to continue to pop up on wedding playlists. However, it wasn't until Alex sent me a private email to tell me his choice of first dance song for him and Erin was a surprise, and that it was also a song by Darius Rucker! And if that's not enough, the father of the bride quoted some of the lyrics of "Hold My Hand". "With a little love, and some tenderenss, we'll walk above the water..." Get the picture? :)

BRIDAL PARTY INTRODUCTION SONG: "Only Wanna Be With You" | Hootie & The Blowfish 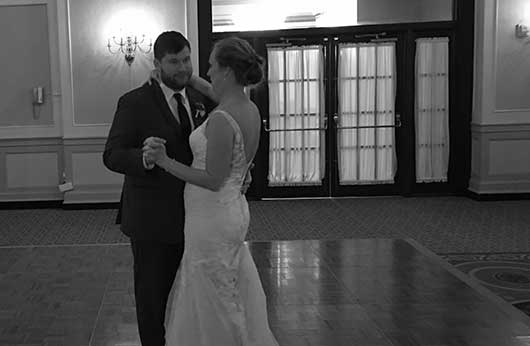 LAST DANCE OF THE EVENING: "All Night Long" | Lionel Richie

And there you have it, the short tale of a couple in love who used their love of Hootie & The Blowfish to come to this beautiful city of Charleston to get married. It's a beautiful story and one that I'll be thinking about for a while as this Charleston fall wedding season begins to fade gradually into another holiday season. Thank so much for finding me online. It means a lot to me that you made it all the way to the end of this blog post. It means that you find the content that I am placing on this blog very compelling and helpful to your cause. It is my goal to keep this blog full of real weddings, DJ tips, playlists information and other information designed to help brides and grooms make the most of their wedding entertainment. I would love to meet you! Click HERE to tell me a little more about your special day.

DJ Mike Bills To Focus Exclusively On Weddings In Charleston

Why You Should Not Cancel Your Wedding Due To COVID 19