Being one of the best Charleston Wedding DJs has become a very rewarding passion of mine over the years.  When a bride and groom hire me to be the DJ at their wedding, they are inviting me to be a part of one of the most special days of their lives. Out of respect for my clients, I'll never look at their wedding day as a "gig", but instead a day in their lives that I curate a soundtrack of music that fits their likes and allows for the creation of lasting memories for them and their family and guests.  Millie & Adam found me online last year from Virginia.  When Millie sent her signed contract over, I saw that her and Adam were going to be married at Brookland Plantation.  Truth be told, I had to do a quick Google search to see where Brookland Plantation was located.  Located on St Pierre Creek,  Brookland Plantation sits on Edisto Island, and at one time was a part of Millie's family, when Dr. Charles and Betty Wannamaker purchased the land in 1968.  During Millie's upbringing, her and her family would frequent Brookland Plantation for recreation, making for lasting memories on those family trips.  It was during those early years that Millie formed those hopes and dreams in her mind that she would have her wedding at Brookland Plantation when she met the man of her dreams.

Back in October of 2018, I had the pleasure of driving out to Brookland Plantation to conduct a site survey alongside some of her other world class wedding vendors she had hired. I say "pleasure" because I compare the trip out to Edisto as peaceful and beautiful as the trip out to Kiawah Island and Seabrook Islands.  Brookland Plantation is currently owned by  former South Carolina  Treasurer, Thomas Ravenel, who purchased the property in 2006. You might also remember him from that popular TV show filmed here in Charleston called "Southern Charm".   Brookland Plantation is NOT your typical wedding venue in Charleston. As a matter of fact, it's NOT advertised for bookings and is only available for very special occasions, which makes being part of Millie & Adam's big day even more special. The chances that I'll get back out to Brookland Plantation are very low seeing this beautiful plantation has very few, if not ANY weddings annually. Simply put, Brookland Plantation is only available for special occasions. It was the perfect day for Millie & Adam, but one thing that could have made it even more perfect are slightly cooler temperatures. The temperaures combined with the humidity made it feel more like late May or early June rather than mid-April.  In the days leading up to this wonderful day, showers had threatened to put a damper on things, but for the entire day, those showers stayed away. You'll want to read on for the music selections that created an amazing soundtrack for Millie & Adam. 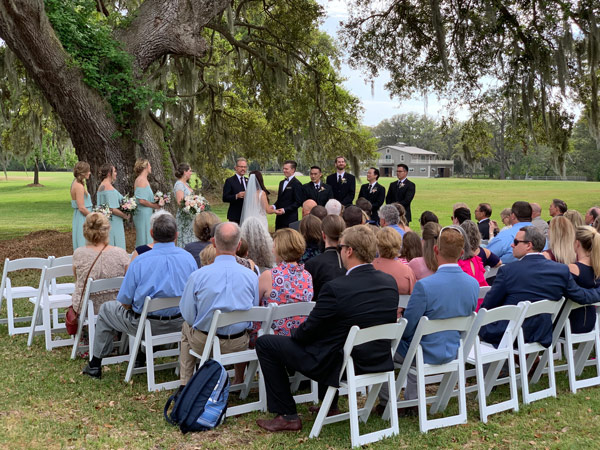 Millie & Adam's Cocktail Hour Music
Millie & Adam requested their cocktail hour be a nice mixture of modern pop, country, rock, and classic rock.  Their cocktail hour was held out behind the plantation house near the marsh. As the cocktail hour came to a close, the guests were moved over to tent area to grab a drink and get ready for the bridal party introductions and first dances.
"Body Back Like A Back Road" | Sam Hunt
"Every Little Thing She Does Is Magic" | The Police
"Feel Again" | One Republic
"Girl Like You" | Maroon 5 & Cardi B
"Hard To Handle" | Black Crowes
"I Do" | Colbie Caillat
"Jack & Diane" | John Mellencamp
"Life Is A Highway" | Tom Cochrane
"Mud On The Tires" | Brad Paisley
"Only Wanna Be With You" | Hootie & The Blowfish
"Piano Man" | Billy Joel
"Addicted To Love" | Robert Palmer
"You Make My Dreams" | Hall & Oates
"Sweet Home Alabama" | Lynyrd Skynrd
"The Joker" | Steve Miller Band
"Alcohol" | Brad Paisley 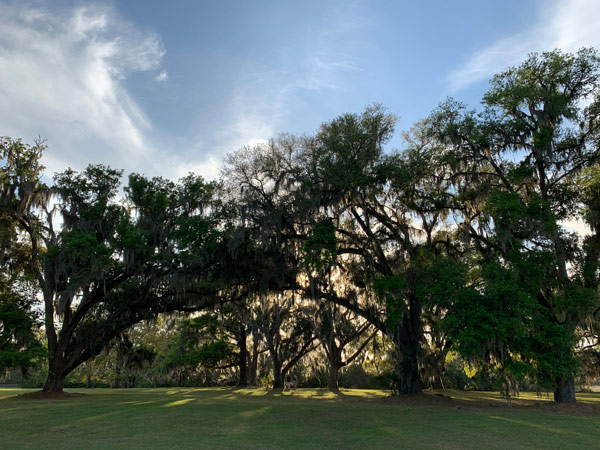 Conclusion
As I mentioned up above, the temperatures and the humidity were a little higher than they should be for April 13, but other than that, it was a splendid day with a fun crowd on the dance floor.  During dinner,  Millie's father made some additional comments (in addiiton to what he discussed during the toasts) about some of the historical facts behind Brookland Plantation.  Millie & Adam instantly became one of my favorite couples of 2019. They were fun to work with, and had a really fun group of guests.

Interested In Booking Mike As Your Charleston Wedding DJ? The spring wedding season in Charleston is in full swing and I'm trying to get these real wedding posts up as quickly as I can after they occur.   Thank you for making it to the end of this blog post. This blog has become one of the top Wedding DJ blogs on the entire internet. It's been my blog from Day 1 to offer my current and future clients a wealth of information when it comes to selecting their wedding DJ, as well as their wedding music. If you are in the hunt for a wedding DJ here in Charleston later this year in 2019, there are still some pretty nice dates still available. 2020 dates are also beginning to fill as well.  Click HERE to tell me a little more about your upcoming big day here in Charleston. Don't know where to begin when it comes to selecting your Charleston Wedding DJ? Check out this archived post which goes over 8 Quick Questions To Ask Your Wedding DJ.