Variety is the spice of life. I like a little variety when it comes to DJing weddings here in lovely Charleston. My aim as a professional wedding DJ has always been to help couples create their own personal soundtrack for their wedding day. This day (which is the biggest of their lives) should include music solely about them. I met Kate with her mom back in June and they introduced me to a new and quiet place to meet clients over in the Mt Pleasant area. Vintage Coffee Cafe During our initial meeting Kate briefly mentioned that her and Jon would want to hear a tropical house playlist during their cocktail hour after their ceremony at Coleman Hall & Chapel in Mt Pleasant. At the time, I took notes, but it wasn't until I met Jon with Kate in early September at one of our consultations that I learned a little more about tropical house. I've always been a big fan of house music, as Charleston used to have a pretty nice house music scene with some great DJs spinning all sorts of house at various areas around downtown Charleston. I knew there were many different sub-genres of house, I am just glad that Kate & Jon allowed me to get more acquainted with the tropical house genre. These are some of the tracks that got played during their Sunday, October 15, 2017 wedding and some I will be adding into my future cocktail hour playlists and receptions.

You might recognize the titles of some of these songs, but the way that they were remixed made all the difference in the presentation of this style of house music during their cocktail hour. During the cocktail hour, numerous guests were doing Shazam on their phones and trying to identify. Some folks even approached me and I let them know that this particular playlist was all by request from Kate and Jon. A true professional wedding DJ makes a couple's dreams come true and satisifies any and all requests.

"Chasing Palm Trees" | Ehrling
DJ / Producer from Sweden. Check out more of his stuff on Soundcloud.

"Sexual Healing" (Marvin Gaye) | Kygo Mix
This tropical house version of this classic really is very sexy! Take a liste by clicking the link in the song title.

"PYT" | John Gibbons Remix
Irish record producer & DJ remixed this classic by Michael Jackson in 2017 and it reached all the way to #12 on dance charts in England.

"September" (Earth, Wind & Fire) | Zanski Remix
The original version of "September" was released back in November of 1978 and would make it all the way to #1 on the Billboard R&B charts. "September" is also featured on the 40 Most Requested Songs At Charleston Weddings Playlist.

"Fast Car" | Jonas Blue
An excellent cover by the 1988 smash hit by Tracy Chapman. Jonas released this cover back in 2015 and it actually charted higher in England than the original in 1988.

"Let Her Go" | Passenger (Kygo Remix)
Originally released by the band Passenger back in 2012, Kygo remixed this in early 2014, along wth David Guetta in the same year.

"Take On Me" | A-Ha (Kygo Remix)
This remix of this mid 80s classic probably received the most questions on who it was who remixed it. It was only fitting that Norwegian producer Kygo remixed the biggest hit of another Norwegian band A-Ha. Turn this one up and be prepared to want to add it into your Charleston wedding playlist.

"Thunder Clatter" | Chelsea Cutter) Wild Cub Cover
"Thunder Clatter" was the first single to be released from Wild Cub's album Youth in the early part of 2013. Wild Cub is an Indie rock band based out of Nashville.

"Stay" | Kygo
"Stay" was released on December 4, 2015 and is the 4th single to be released from Kygo's first album Cloud Nine. The song would go all the way to the Top 10 on the Hot Dance / Electronic chart.

"New Love" | Dua Lipa (Jarreau Vandal Remix)
"New Love" was released in the summer of 2015 and was the very first single of Dua Lipa's self-titled album.

"So Many Details" | Toro Y Moi
Go ahead, I know you want to. Click back over to You Tube and do some more digging around on Toro Y Moi. He tends to be pretty addictive.  Just be sure to turn up your headphones or speakers :)

"Green & Gold" | Lianne La Havas (Darius Remix)
"Green & Gold" can be found on the album, Blood which was released in the summer of 2015.

After we wrapped up this tropical house cocktail hour, it was time for the bridal party introductions. Kate & Jon picked out Sam Cooke's "You Send Me" for thier first dance. But, keeping with the "variety is the spice of life" theme for this wedding, Kate's brother sang the song to a track and was accompanied by her dad's good friend on acoustic guitar. It was a truly beautiful moment.
FATHER / DAUGHTER DANCE: "I Hope You Dance" | Lee Ann Womack
MOTHER / SON DANCE: "Blue Orchids" | Glenn Miller 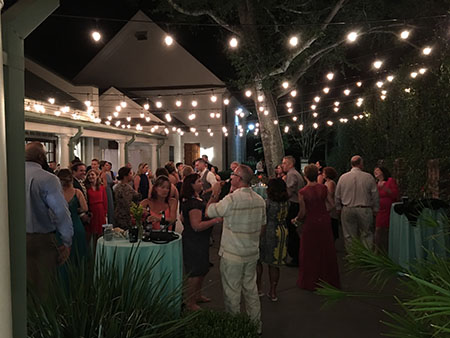 Moving into the dinner portion of the evening, there was a jazz theme with the music. Artists ranging from Vince Guaraldi, Miguel Zenon, Dave Brubeck, and Michael Buble were played until we began the toasts and cake cutting.
BOUQUET TOSS: "Cosmic Girl" | Jamiroquai (DJ selection)
GARTER TOSS: "Ignition" (Remix) | R Kelly

Wanna Speak With Mike Bills About Being Your Charleston Wedding DJ?
It was a truly beautiful day over at Coleman Hall & Chapel in Mt Pleasant. There's only thing that would have made it better and that is slightly cooler temperatures, but as I write this post a few nights later, fall has finally arrived in Charleston.  When you make the playlist about the bride and groom and their likes and dislikes, amazing things happen!  I wish Kate and Jon a lifetime of love and happiness. I am looking forward to the next weddings that are coming my way in this fall season. I am also looking forward to another advertisement in Charleston Weddings Magazine. This copy of the magazine should hit stores on or about October 30 and will be available through the second annual Charleston Wedding Week coming up in January and going through Valentines Day. Engagement season is almost here, my new video has been posted to my You Tube Channel, as well as my home page to the website. It's definitely an exciting time.  I really love to talk to couples about their musical tastes. I wanted to thank you for finding this blog as you search for one of the most important aspects of your wedding day here in Charleston: The DJ entertainment. Click the link up above to be taken over to my main website so that you can fill out a contact form to tell me a little more about your wedding day. Are you interested in a custom cocktail hour playlist? Check out this post on How To Plan The Best Cocktail Hour Music.