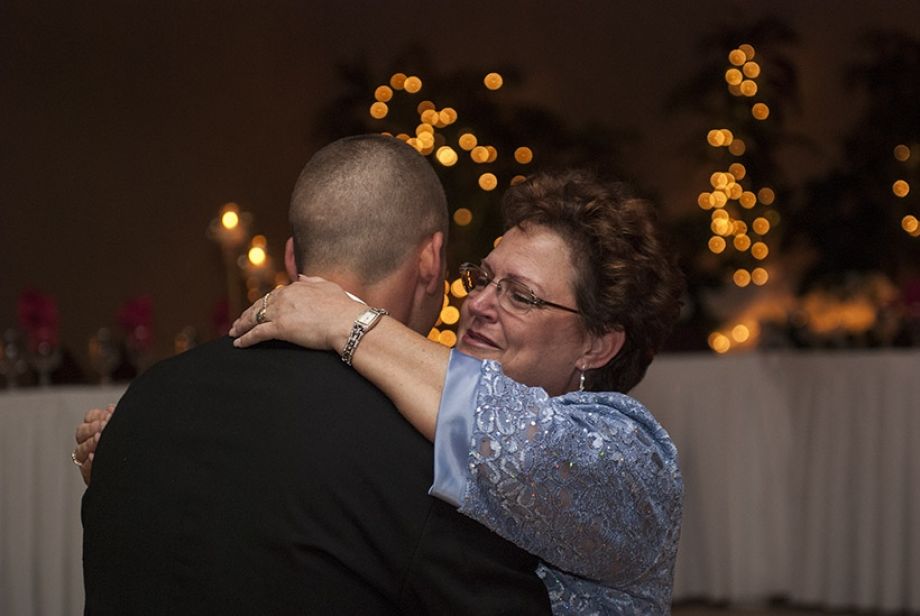 A mother is truly the first lady in her son's life. She's responsible for getting him to this point in his life of marrying the woman of his dreams. Without his mother, he might not have been prepared as a man to get to this very important day of his life..  A mother stands by his son through thick and thin, and looks forward to the day where he gets to marry this very special girl he brought home and who approved.. After a couple's first dance and father / daughter dance, the mother-son dance is traditionallly performed. The groom and his mother should sit down and think of a song that is meaningful and describes their nurturing relationship over the years. Ladies and gentleman. Hot off the presses. The results have been tabulated for popular mother / son dances.  When a groom and his mother do their dance together, you will be witnessing a pretty rare moment where the spotlight is on the groom's mom.  As one of the best Charleston Wedding DJs, it's been my goal to provide my clients with fresh content and song ideas.  Go ahead and set aside some time with your mother to listen to these songs and let me know you think.

Feel free to check out my Spotify profile. You can find me over there at DJ Mike Bills. If you are not into Spotify, and want to take a listen to this very special songs, just click the link inside each song title to be taken over to You Tube to listen.

"Child Of Mine" | Carole King
You can find this beautiful song on Carole King's 1970 album Writer.  Writer was her first solo album. Take a listen to the song and hear the words and you'll begin to understand why this Carole King classic is a popuar choice for the mother / son dance on wedding playlists.

"In My Life" | The Beatles
Rolling Stone Magazine ranked this classic from the Beatles on their list of the 500 Greatest songs. You can find this beautiful song on the 1965 album Rubber Soul.

"A Song For Mama" | Boys II Men
You might remember this song in the 1997 movie Soul Food.  A popular favorite for modern grooms, the song spent a few weeks at #1 on the R&B charts, and made it as high as #7 on the Hot 100 chart. Take a listen by clicking in the song title and you'll see how perfect a song this is for this special moment during your wedding reception.

"Take Your Mama" | Scisssor Sisters
If your mom wants to have some fun during the mother / son dance, throw this song on. The Scissor Sisters released their first album in 2004. "Take Your Mama" was in rotation on radio in the spring and summer of 2004 and peaked at #7 on the Adult Alternative chart.

"Mother Like Mine" | The Band Perry
With lyrics like "She's the sky that holds the clouds, She's the lady of the house.....", you can begin to get a little curious about this song for your mother / son dance. You can find it on the Band Perry's 2013 album, Pioneer.

"Rainbow Connection" | Kermit The Frog
Maybe you grew up watching the Muppets and your mom saw how much you loved them. Perhaps your mother wanted to surprise you with a song like this. The Muppets movie came out in 1979, and this song made it all the way to #25 on the Billboard Hot 100 chart.

"Days Like This" | Van Morrison
You might remember this song on the 1997 movie, As Good As It Gets. Van Morrison has written some of the most beautiful songs, like 1989's "Have I Told You Lately?". This song was released back in the spring of 1995 and is on the album of the same name.

"Simple Man" | Shinedown
Originally written and recorded by Lynryd Skynrd, Shinedown recorded an excellent cover of the song back in 2003 on their album Leave A Whisper.  I've actually had both versions selected by some of my clients. Usually most of my clients opt to fade out the song at about the 2:30 mark, as the song is a tad long.

"Loves Me Like A Rock" | Paul Simon
Back in 1973, Paul Simon released his album There Goes Rhymin' Simon.  Released in the summer of 1973, the song would peak at #2 in October. Over the years, this smash hit by Paul Simon has been a popular choice for mother - son dance at my weddings.

"Mama's Song" | Carrie Underwood
While this song has been used for the mother - son dance, it's also been used by my clients if they desire a special dance where the bride does a dance with her father. You can find this song on Carrie Underwood's album Play On, which was released in November 2010. The song would make it all the way to #2 on the Hot Country charts.

"Never Alone" | Lady Antebellum
Written by Jim Brickman, Lady Antebellum teamed up and released this song as a single back in February of 2007. "Never Alone" would peak on the Adult Contemporary chart in the summer of 2007.  With beautiful lyrics like "May the angels protect you Trouble neglect you...My love will follow you, stay with you..Baby you're never alone.....you'll be able to see how this is a perfect fit for a mother - son dance song.

"The Wonder Of You" | Elvis Presley
Written by Baker Knight, Elvis reached #1 in England and the Top 10 in American with a live version of this song back in 1970.  The song would peak at #1 on the easy listening chart.

"You Raise Me Up" | Josh Groban
Back in the fall of 2003, you couldn't turn on the radio without hearing this Josh Groban song. You can find the song on Groban's album, Closer. "You Raise Me Up" would reach Number 1 on the adult contemporary chart in 2004.

"Bridge Over Troubled Water" | Simon & Garfunkel
The title track to this 1970 album by Simon & Garfunkel would become a signature song of this duo.  The song would make it all the way to Number 1 on the Hot 100, as well as the adult contemporary charts, and would later be covered by Aretha Franklin, Peggy Lee, and Elvis Presley.

"Turn! Turn! Turn!" | The Byrds
If I were to create a post about some of the most popular songs of the 60s, this classic by The Byrds would easily be in the Top 5. Released in December of 1965, the song would peak at #17 on the Billboard Top Albums chart.

"There You'll Be" | Faith Hill
You might remember this song on the soundtrack to the movie Pearl Harbor.  Released back in the spring of 2001, the song would make it all the way to Number 1 on the Adult contemporary chart. The lyrics "In my heart there will always be a place for you, for all my life, I'll keep a part of you with me...." are ideal in describing a mother's unconditional love for her son.

"Kind & Generous" | Natalie Merchant
Natalie Merchant had tremendous success artist, as well as with the band 10,000 Maniac back in the 90s. "Kind & Generous" can be found on her album "Ophelia". Released back in the spring of 1998, the song would peak at #1 on the Adult Alternative chart in the summer of that year.  A mother has been so "kind and generous" for raising her son. Check out the rest of this song by clicking on the link in the song title.

Interested In Learning More About Hiring Mike To Be Your Wedding DJ?
The possibilities are endless when it comes to choosing the ideal mother - son dance song.  It's been my goal all along to provide my current and prospective clients some of the most compelling content to help them choose these types of songs for these key moments of their wedding reception. For even more song choices for the mother / son dance, be sure to click on the highlighted link. Need to learn more about creating the perfect musical soundtrack for the most important day of your life? I love to talk to newly engaged brides and grooms about the music for their wedding. Unlike a lot of other wedding DJs, it's always been my goal to get to know my brides and grooms.  Click HERE to tell me a little more about your wedding here in Charleston and let me know when we can set up a time to discuss your most special day.