I know what you are probably saying. This is just another attempt for Mike to talk more about the music of the 80s again. Well, quoting those famous Billy Joel lyrics, "you may be right" :) One of my specialties as a professional wedding DJ here in Charleston is 80s music. Earlier this year, I had uploaded a few blog posts about some of the music from 1988. I still owe you Part 3 of that series, but today's post explores the rather stark comparison in the Top 10 of the Billboard Hot 100 from this time in 1988 versus the same time here in 2018. Mike Bills Entertainment is always on top of NEW music that is just charting and beginning to really take off on the Billboard charts.  My company is on the pulse of what's hot on the Top 40, rap, country, as well as the rock charts.  In researching the latest Billboard charts for this week here in 2018, approximately 70% of the artists who occupied the first ten spots were rap artists, while 20% were pop, and one artist could simply be put into the R&B category. When we time warp back to 1988, you'll see much more diversity in the Top 10 on the Billboard Hot 100 during the summer.  You'll want to read on as the difference in the music charts between now and 30 years ago is pretty extreme.

Before we get into this comparison, I wanted to remind you that Mike Bills Entertainment is true professional wedding DJ and has forged a reputation as being one of the best Charleston wedding DJs. The best wedding DJs receives ALL their music legally, and my company is NO different. Check out this link for my music source. Primecuts Music 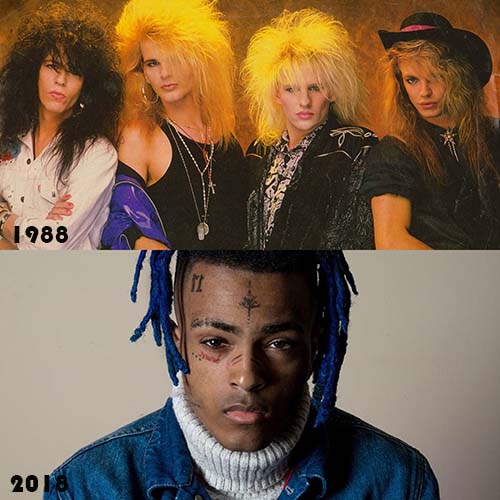 Our first illustration of the stark differences begin with our Number 10 song. Poison was still riding high in the summer of 1988 during the height of the Los Angeles glam metal movement. "Nothin But A Good Time" was the lead single off their album "Open Up And Say Ahh".  Sad! by the late rapper XXXTentacion had peaked earlier in the year at Number 1, but sits at Number 10 at the time of this post. Check out both songs down below.
Number 10 On The Billboard Hot 100 | July 20, 1988
July 20, 2018 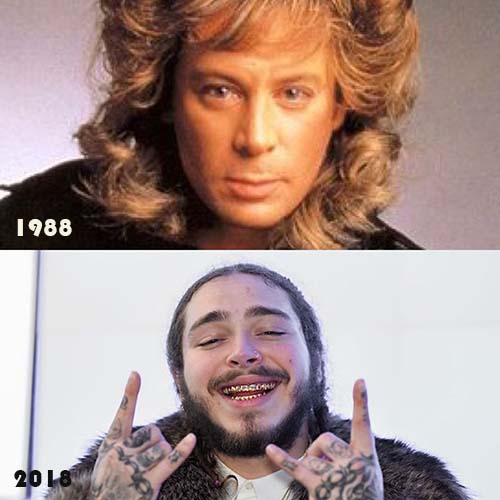 Up next, the Number 9 song during this time in July 1988 was continuing a bit of a resurgence for Eric Carmen. His previous hit, "Hungry Eyes" was for the Dirty Dancing soundtrack and was released in November of 1987. "Make Me Lose Control" would eventually make it all the way to Number 3. As we jump ahead to 2018, rapper Post Malone occupies the Number 9 spot with his hit "Psycho" along with Ty Dolla $ign.
"Make Me Lose Control"
"Psycho" 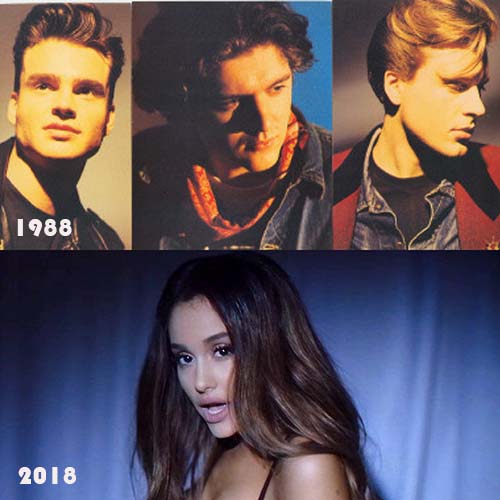 Continuing with the comparison of the Top 10 of the Billboard Hot 100 between 1988 and 2018, it's another pretty stark contrast in music. Back in 1988, there was a small British invasion consisting of pop rock bands like Breathe, Waterfront, and many more. "All That Jazz" was released in the spring of 1988 and "Hands To Heaven" would reach Number 2 in August of 1988. Meanwhile, back to 2018, Ariana Grande has a very catchy track for the Summer of 2018 coming in at Number 8 on the Billboard Hot 100 during the week of July 20.  "Hands To Heaven" remains in heavy rotation today on adult contemporary radio stations across America. 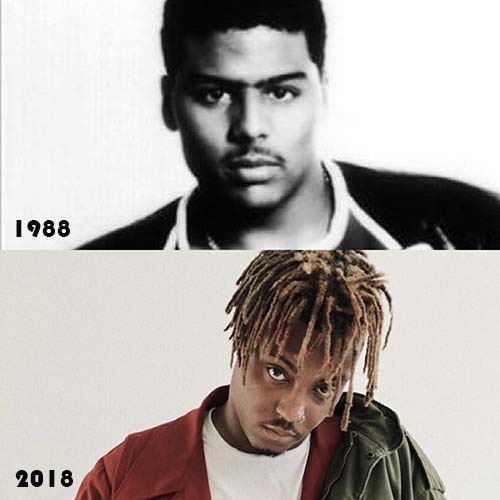 Back in the summer of 1988, you couldn't turn your radio on or MTV for that matter without hearing this hot and sultry, romantic song by Al B. Sure. "Nite And Day" would make it all the way to Number 1 on the R&B charts, and Number 7 on the Billboard Hot 100."Lucid Dreams" by American rapper Juice Wrld was released back in March 2018 and went all the way to Number 3, before dropping back down to Number7 on the Hot 100 at the time of this post.
"Nite And Day"  | July 1988 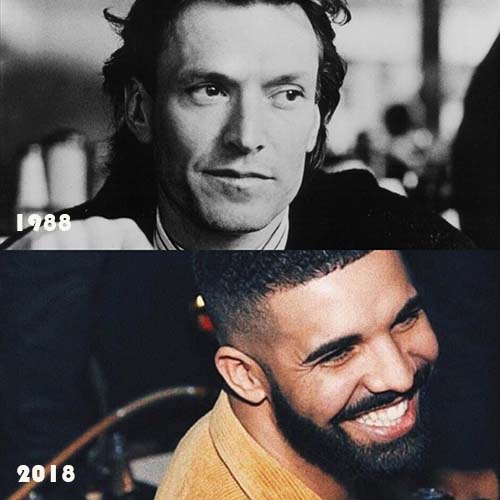 With the release of his "Roll With It" album in the summer of 1988, Steve Winwood became one of the biggest artists of that year. "Roll With It" would eventually go all the way to Number 1 in August of 1988. Moving back to the present in July 2018, Drake has the first of THREE songs in the Top 10 of the Billboard Hot 100 with God's Plan.  God's Plan was released in January of 2018 and became the 29th song to debut at Number 1 on the Hot 100 chart.
Steve Winwood | July 1988

After the release of his self titled album in 1987, Richard Marx could do no wrong through the rest of the 80s. "Hold On To The Nights" was the fourth song to be released from his first album and would reach Number 1 by the end of July 1988.  As we time warp back to 2018, Ella Mai has a catchy R&B genre that sits at Number 5 on the Billboard Hot 100. "Boo'ed Up" is on her EP "Ready", which was released in February of 2017. 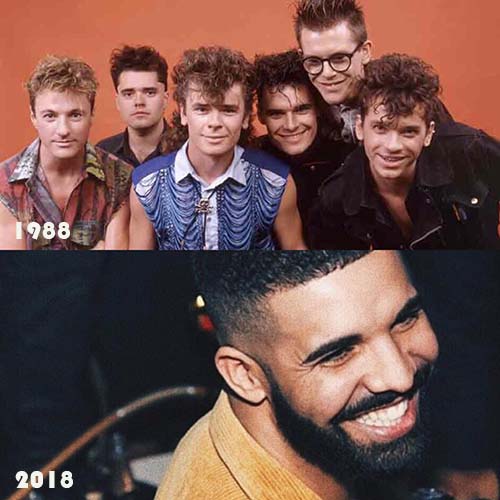 By the summer of 1988, INXS had become one of the most successful bands of the 80s with their distinct sound.  "New Sensation" was one of four Top 10 hits that were released from their album "Kick", and allowed INXS to become one of the most successful bands from Australia.  Back to 2018, "Nice For What" was released back in the spring of 2018 as the second single from his "Scorpion" album. 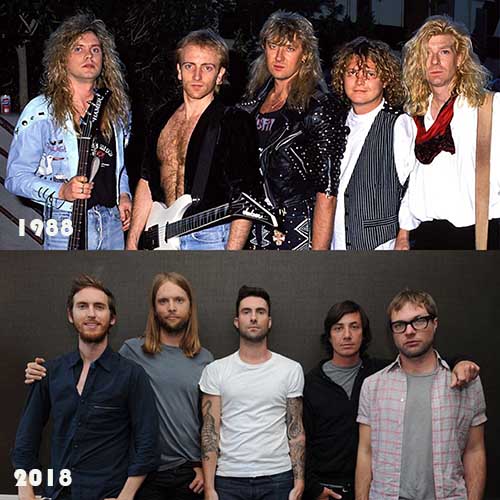 Released in the spring of 1988, "Pour Some Sugar On Me" would eventually peak at Number 2 on the Billboard Hot 100 by the end of July in 1988. It would also be ranked Number 2 on VH1's list of greatest songs of the 80s. Meanwhile, back in the summer of 2018, Maroon 5 teams up with Cardi B for "Girl Like You", making it all the way to Number 3 at the time of this post.

"Pour Some Sugar On Me" | Def Leppard

Back in the summer of 1988, Pebbles made it "hot" to ride in a Mercedes.  The song was released from her self titled record in 1987. The single "Mercedes Boy" would be released in March of 1988 making it all the way to Number 2 in July of 1988. "I Like It" by Cardi B, which all features Bad Bunny and J Balvin was released just in time for Memorial Day and has become one of the biggest tracks of summer 2018, sitting at Number 2 on July 20, 2018. 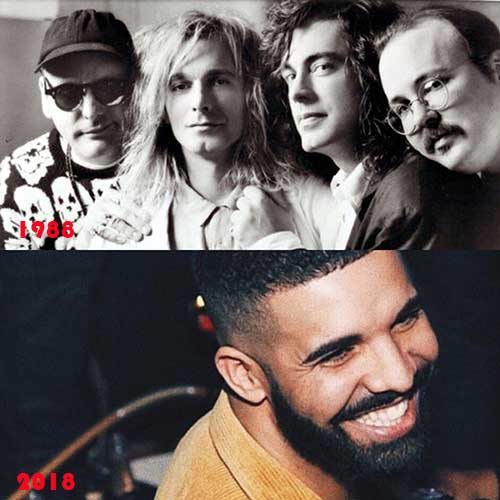 Power ballads were big in 1988 and becoming bigger. "The Flame" was released in April of 1988 and would make it to Number 1 by July 23, 1988.  The song would become one of the biggest power ballads of the 80s. It might just be perfect for a slow dance at your Charleston wedding.  Getting back to 2018, Drake continues his dominance on the Top 10 of the Billboard Hot 100.  "In My Feelings" would be released to urban and CHR radio back on July 10th and is already Number 1.

"In My Feelings" | Drake

Wanna Speak With Mike Bills About Being Your Wedding DJ?
As you can see the Top 10 back in the summer of 1988 included quite a bit more diversity. You had glam metal, rock, pop, soft rock, and R&B making up the ten biggest songs of July 1988. Fast forward to 2018 and we can see the dominance of rap in the Top 10 of the Billboard charts.  I hope you enjoyed this look back at the music charts of "then" and "now".  Music exploration and research makes up a big part of the passion I possess as a professional wedding DJ here in Charleston.  When you book your wedding with my company, we will sit down and create an amazing mix of music that is all about you and your guests.  I know it's summer, but did you recently get engaged and are you planning a wedding here in Charleston? Choosing your wedding DJ is one of the most important parts of your day and should not be taken lightly. Click the link up above to be taken over to my contact form so that you can provide some details to me about your wedding day so we can set up a time to talk about your big day. I would love to be your wedding DJ.