Perhaps it was the recent passing of their great drummer Charlie Watts back in August or the fact a buddy of mine was seeing the band in Atlanta the other night. The Rolling Stones have been on my mind in recent weeks. They've been on my mind so much that I thought it was a great time to delve into their body of work and put together a selection of songs for a Rolling Stones cocktail hour. With a career that spans almost 60 years, the Rolling Stones have been called one of the Greatest Rock & Roll Bands Of All Time.  As I set aside some time to look over their music catalog over since the early 60s, their music has always maintained its roots back to the blues and rock & roll.  Like a lot of bands in the late 60s, the Stones would release an album that had a psychedelic feel to it. By the late 70s, they'd release Some Girls, which would be heavily influenced by disco, before moving back into straight up rock in the early 80s.   Spanning from the 60s into some of their lesser-known commercial releases from the 90s, I think you'll like this playlist of music from one of the best rock bands in history.

Why the Rolling Stones? Why not? I am a firm believer that brides and grooms should have the latitude to put together a soundtrack to their wedding day that is comprised of songs they know and love.  Being a professional wedding DJ whose sole focus is ALWAYS on the music, I enjoy taking the time to put these types of posts together. Even if you are a bride or groom who might not be into the classic rock of the Rolling Stones, the themes for the music for your cocktail hour are endless. For more ideas on How To Plan The Music For Your Cocktail Hour <---Click HERE

Download This Rolling Stones Cocktail Hour Playlist From My Spotify Profile NOW
While I have a completely interactive and intuitive system built into my website for brides and grooms to log in and choose their music, I've got a lot of couples who approach me with Spotify playlists. Since this has become a trend over the past several years, I put together a Spotify profile guaranteed to provide playlist inspiration as you think about how you'd like your reception to be. All you need to do is head over to Spotify and search for DJ Mike Bills.

"Start Me Up" | 1981
Back in the summer of 1981, the Rolling Stones would release the album Tattoo You.  It's hard to believe we're at 40 years of making grown men cry with this signature song.  "Start Me Up" would peak at #2 on the Billboard Hot 100. If you are looking for more of The Best Rock Songs From The 80s For Your Cocktail Hour. <---Click HERE

"Angie" | 1973
Certainly an obvious choice if you are a bride named "Angie" :) Keith Richards mentioned that the title of this song was inspired by his baby daughter.  "Angie" was released as a single from the album Goats Head Soup in 1973. Released in August of 1973, "Angie" would make it all the way to Number 1 on the Billboard Hot 100. Down below, I posted an image of the album cover of Goats Head Soup. I first saw this album when I worked at my first rock station. I can remember a lot of talk amongst other DJs about this particular album cover. 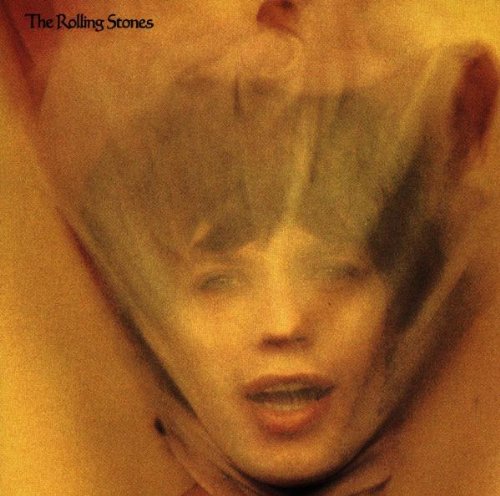 "Anybody Seen My Baby" | 1997
You know I might be putting together this selection of Rolling Stones songs for cocktail hour at weddings, but I do't profess to be a huge Stones fan. That being said, I think their later albums like Bridges To Babylon are some of their best.  If you are a fan of Angelina Jolie, you might click on the link up above to watch the video. "Anybody Seen My Baby" would peak at #3 on the mainstream rock chart.

"Saint Of Me" | 1998
"Saint Of Me" was another single released from the 1997 Bridges To Babylon album. I can remember it in rotation during the spring of 1998 at the classic rock station I was working for at the time. "Saint Of Me" would peak at #7 on the Adult Alternative chart.

"Happy" | 1972
One of the rare moments where Keith Richards is on lead vocals. You can find this song on their iconic record Exile On Main Street. "Happy" would be released during the summer of 1972 and peak at #22 on the Hot 100 chart.

(I Can't Get No )"Satisfaction" | 1965
If you like to spoil your concert experiences and look up setlists online, you'll find that this iconic song is usually how the band ends all their shows.  You can find the song on the album Out Of Our Heads. The song would be released in June 1965 and become one of the biggest songs of that summer, peaking at #1 on the Hot 100 chart.

"Gimme Shelter" | 1969
Once used in an American Red Cross commercial, you can find this song on the 1969 album, Let It Bleed.   The song was ranked in the Top 20 of Rolling Stone Magazine's 500 Greatest Songs of All time.

"She's A Rainbow" | 1967
In 1967, the Rolling Stones would get a little more "psychadelic" when they released The Satanic Majesties Request.  If the song seems a little familiar, you probably saw it in the past year or so on an Adobe software commercial. "She's A Rainbow" would peak at #25 on the Billboard Hot 100 chart.

"Beast Of Burden" | 1978
"Beast Of Burden" would be the first of two songs to appear on this selection of Rolling Stones songs for cocktail hour for your wedding playlist from their album Some Girls.  Later covered by the lovely and talented Bette Midler,  the Stones version of the song would peak at #8 on the Hot 100 chart.

"Can't You Hear Me Knocking" | 1971
Back in 1971, the band would release Sticky Fingers, and with it came this beautiful jazzy, rock 7 minute song.  There is an amazing saxophone solo in this song that you cannot miss!

"Brown Sugar" | 1971
The Stones album Sticky Fingers was released in 1971. "Brown Sugar" would be the first song to be released off the record making it all the way to Number 1 on the Billboard Hot 100.  The song was #495 on the 500 Greatest Songs Of All Time by Rolling Stone magazine.

"Let's Spend The Night Together" | 1967
If you are a hard core record collector, you might remember this song was released as a double-sided single in 1967, with "Ruby Tuesday" on the other side.  The song would later be added onto the American release of the album Between The Buttons, only peaking at #55 on the Hot 100 chart.

"Miss You" | 1978
Ah yes, if you are a bride or groom who is interested in putting a little disco on your playlist, you definitely would add this one! "Miss You" was the first single to be released from the album Some Girls.  "Miss You" would peak at #1 on the Billboard Hot 100 chart. For more of the Best Disco Songs For Your Wedding Playlist <---Click HERE

"Emotional Rescue" | 1980
Back in the summer of 1980, the Stones would release yet another record that had a bit of a disco vibe to it.  While I was not old enough to enter a disco in 1980, I can imagine a DJ throwing this song late at night, right before the club is closing.  This title track would peak at #3 on the Billboard Hot 100 in the late summer / early fall of 1980.

"Monkey Man" | 1969
I added this song into this selection of Rolling Stones for cocktail hour because the title just puts a smile on my face.  You can find this funky song on the album Let It Bleed, which was released back in 1969. While it was not officially released as a single, the song has gotten a lot of airplay over the years on classic rock radio.

"Under My Thumb" | 1966
Brian Jones plays the marimba in this track, which is actually one of my favorites from 60s Stones.  "Uncer My Thumb" was covered by Tina Turner in 1975, and can be found on the 1966 Stones album, Aftermath.

"Jumpin Jack Flash" | 1968
Back in the 60s, the Rolling Stones would release a lot of "non-album singles". "Jumpin Jack Flash" was one of those singles that would later be covered by the late Aretha Franklin.  While the song only peaked at #4 on the Hot 100, the song would be added to Rolling Stone magazines list of the 500 Greatest Songs Of All Time.

"You Can't Always Get What You Want" | 1969
And we wrap up this selection of Rolling Stone songs for cocktail hour with another long one!  You can find "You Can't Always Get What You Want" on the album Let It Bleed. The song was not released as a single, but later was released by London Records in 1973, only garnering a #42 place on the Hot 100.  The original version of the song stands at over 7 minutes, but a more radio friendly version at just under 5 minutes was produced in stereo.

Interested In Talking To Mike Bills About Being Your Wedding DJ?
You gotta love the Rolling Stones! I hope you enjoyed listening to all the songs I put on this playlist. The biggest thing to remember when putting together the playlist for your wedding is the choice is YOURS. The vibe and feelings you want are all yours. Be sure to talk to your wedding DJ about the vibe you would like to create.  Whether it's the Rolling Stones or 90s Alternative, there are countless choices for how you'd like your cocktail hour to be.  Perhaps its a Reggae or Funk cocktail hour you want? I'd love to speak with you about your wedding. In a world where everyone is a wedding DJ, I put this blog together a long time ago to showcase not only musical vocabulary, but also the classy and fun side to being a wedding DJ. Thank you so much for visiting my website and blog. If you'd like to talk to me, just click on the link up above and you'll be taken over to my contact form where you can fill out some basic details about your day. I look forward to speaking with you soon.

Other notable Rolling Stones songs you might consider adding into your playlist for cocktail hour:
"Sympathy For The Devil"
"Paint It Black"
"Street Fighting Man"