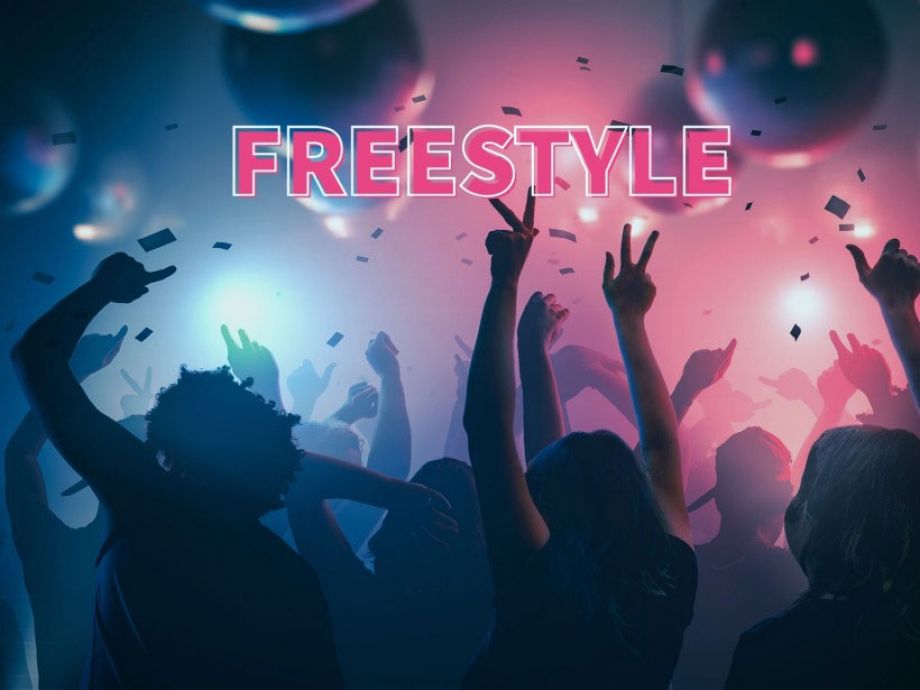 The Best Freestyle Cocktail Hour For Your Wedding Playlist

If you wanted me to take the time to write about all the different genres of music that emerged during the 80s, I could very well be writing for the next 5 years.  The music of the 80s spanned so many genres, and in those genres were many subgenres.  Back in the late 80s, there was a type of electronic music that had it's roots back to New York City called freestyle.  Freestyle originated in the Hispanic neighborhoods around the Upper Manhattan area, as well as the area around The Bronx in New York City.   This NYC freestyle scene extended into New Jersey, as well as Philadelphia. By the time we reached the late 80s, freestyle artists were beginning to get substantial airplay on Top 40 radio stations.  Musical groups like Expose, who were part of a freestyle scene in Miami would rule the charts from the late 80s into the early 90s with their infectious, danceable freestyle sound.  Freestyle music went mainstream during what I like to call the Best Era Of Dance Music in the modern music history. This amazing era of dance music extended from the late 80s into the mid 90s. The music of the freestyle era is just one of the many options the modern bride and groom have when putting together their wedding playlist. You better be prepared to dance!

For those modern brides and grooms who have landed on this post and are sort of stumped as to how to proceed with putting together the music for your cocktail hour, you'll want to read this post ---------->> How To Plan The Cocktail Hour Music For Your Wedding -  Don't ever let a wedding DJ dictate what they will do for you during cocktail hour. Your cocktail hour is a time for your guests to chill and kick back before dinner and dancing. It's YOUR wedding, so YOU should have a say-so in what your wedding DJ plays.

Download This Selection Of Freestyle Songs From My Spotify Right NOW
Back in the early part of 2020, I decided to migrate all of the playlists you've come to know and love on this blog over to Spotify. Why did I do this? Because so many of my clients were coming to me with ready-made playlists of so many of their favorite songs.  At last check, I've amassed over 135 different playlists, designed to give  modern brides and grooms inspiration when sitting down to put together the playlist for their wedding.   All you need to do is head over to Spotify and search for DJ Mike Bills. Since music is my life, I'm always coming up with new playlists to help brides and grooms with their music.

"Temptation" | Corina
When you've published as many blogs about music as I have, you are bound to see some crossover from other posts.  Corina was a freestyle singer / dancer who came from Manhattan, New York. She released numerous dance songs in the late 80s through the mid 90s. Back in the summer of 1991, she'd release "Temptation", which would break into the Top 10 on the Billboard Hot 100.  1991 was one of the greatest years in 90s music. To learn more about The Best Songs From 1991 For Your Wedding Playlist <--Click HERE.

"Head To Toe' | Lisa Lisa & The Cult Jam
Lisa Lisa & The Cult Jam was one of the first freestyle musical groups to emerge out of the New York City during the mid 1980s.  In 1987, the group would release their album Spanish Fly.  "Head To Toe" would be the first single to enter the charts in April of 1987. By the summer of 1987, the song would peak at #1 on the Hot 100 chart. For more of The Best Songs Of 1987 For Your Wedding Playlist <---Click HERE

"Come Go With Me" | Expose
Expose was part of that Miami freestyle scene I mentioned up above. As a matter of fact, they were so big in the late 80s and early 90s that you'll see another single from them on this selection of songs. "Come Go With ME" would be the third song to hit the radio from their album Exposure in early 1987. "Come Go With Me" would peak at #5 on the Hot 100, and make it all the way to Number 1 on the dance chart.

"Catch Me (I'm Falling)" | Pretty Poison
From New York City down to the great city of Philadelphia, the freestyle scene spawned a Top 10 hit for the musical group Pretty Poison. If you are a fan of obscure 80s movies, you might remember the song being featured in Kickin It Old Skool, as well as The Big Sick. "Catch Me I'm Falling" would enter the Hot 100 at the end of September 1987, and peak at #8. The song would top the Dance charts in 1988, and the single would eventually be certified gold.  If you are a modern bride and groom and are looking for some The Most Requested Musicians & Bands From Philadelphia. <---Click HERE

"Point Of No Return" | NuShooz
John Smith and Valerie Day formed NuShooz in Portland, Oregon back in the early 80s, and would release their signature song "I Can't Wait" in 1986.  You can find "I Can't Wait" on My Best Funk Cocktail Hour For Your Wedding Playlist <---Click HERE "Point Of No Return" would enter the Hot 100 in July of 1986, but only get as high as #28. However, the track would peak at #1 on the Dance chart.

"Give Me Tonight" | Shannon
I've been reading all over the web that Shannon's song "Let The Music Play" marked the beginning of the freestyle scene as we knew it back in the 80s. Whether or not that's true, I can tell you that "Give Me Tonight" will get you out on the dance floor too.  "Give Me Tonight" would not make into the Top 40 on the Hot 100, but would peak at #1 on the Hot Dance chart.

"Sending All My Love" | Linear
Linear were a freestyle music group that were formed in Fort Lauderdale in 1989.  In 1990, they'd release their self-titled album, where the first single to hit radio was "Sending All My Love". The song would peak at #5 on the Hot 100 in May of 1990.

"Two To Make It Right" | Seduction
Seduction were an all-female freestyle group formed in 1988 out of New York City. "Two To Make It Right" was featured on their first album Nothing Matters Without Love. The song would hit the Hot 100 in November 1989 and peak at #2, and #1 on the Hot Dance chart.

"Fascinated" | Company B
Company B was a freestyle musical group formed in Miami in 1986. "Fascinated" was the first single to be released from the self - titled album in 1987. The song would only peak at #21 on the Hot 100 chart, but would peak at #1 on the Hot Dance chart.

"What's On Your Mind (Pure Energy)" | Information Society
This synth-pop musical group from Minneapolis got into the freestyle scene with this amazing club banger released in 1988.  The song would debut in the Hot 100 in July 1988 and spent 6 months on the chart, peaking at #3 in October.

"Let Me Be The One" | Expose
I mentioned there would be two Expose songs because they were just that big when it came to the freestyle music genre. "Let Me Be The One" would be released in May of 1987 and would be the follow-up to "Come Go With Me". The song would peak at #7 on the Billboard Hot 100.

"I Wanna Be The One" | Stevie B
Just a few years before he'd score the biggest song of his career with "Because I Love You (The Postman Song)", Stevie B was an integral artist in the freestyle music genre. In 1988, he'd release the album In My Eyes, which would spark his first Top 40 hit with "I Wanna Be The One".

"Boy I've Been Told" | Sa-fire
Originating from San Juan, Puerto Rico, Sa-Fire would release "Boy I've Been Told" in the fall of 1988. While the song only peaked at #48 on the Hot 100, the song would peak at #13 on the Hot Dance chart. In 1989, she'd score the biggest song of her career with "Thinking Of You". The song would peak at #4 on the adult contemporary chart.

Ready To Talk About The Music For Your Wedding With DJ Mike Bills?
Putting together the music selections for this post really had me thinking about just how great the 80s were in terms of dance music. If you look at the 80s as a general rule, we were not standing still too much :)   While it may seem like we were sitting still with some of this great dance music, the 80s were an amazing decade for Soft Rock. <--Click HERE for some of the best soft rock songs of the 80s. I hope you enjoyed dancing all the while you were reading over this post. I know I certainly had the music cranked when putting all the music together for you.  If you are just reading this post and are in the hunt for one of the top wedding DJs for the biggest party of your life, I would love to speak with you.  It is a passion of mine to sit down with modern brides and grooms and discussing some of their favorite songs, and what they would like to hear at their wedding.  I'd love to speak with you about your wedding. If you'd like to set up a time to speak with me about your wedding, just click the link up above, and you'll be taken over to my contact form. There, you'll be asked for some basic details to fill out and we'll set up a time to get together to discuss the music for your wedding.