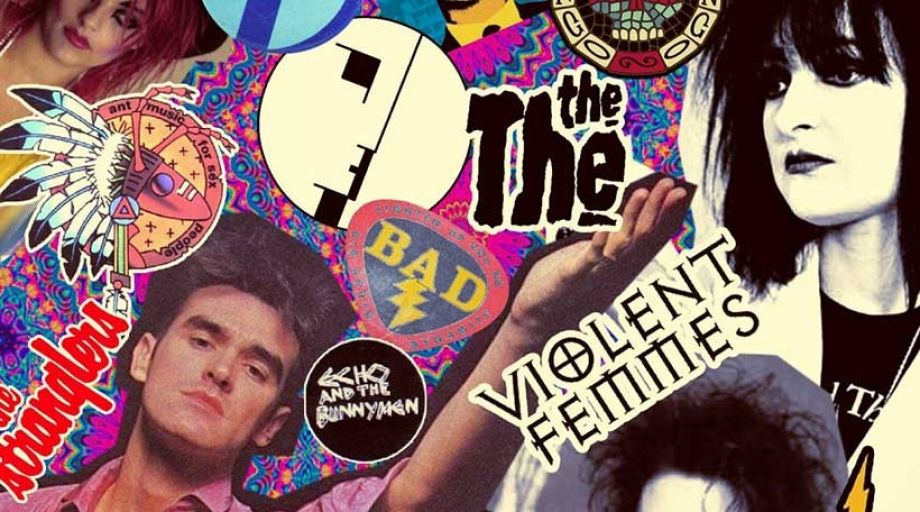 When it comes to 80s music at your Charleston wedding, you normally see a lot of the pop artists get added into a couple's playlist. The more fun pop artists like Cyndi Lauper, Michael Jackson, George Michael, Huey Lewis, Prince, and Culture Club created some of the most iconic pop songs. The lines were always a bit blurred throughout the 80s as to what defined "alternative" music. Alternative music had a different sound, and at times, a bit of an edge.  Back in the latter part of the 80s, "alternative" became more of a defined genre as shows like "120 Minutes" popped up on MTV and showcased the bands you did not hear on Top 40 radio.  Then, as the 90s began, there were more and more radio stations that signed on the air whose focus was solely "alternative music".  When I was in high school back in the latter part of the 80s, most of the bands you'll see on this playlist were considered "underground", and there was a bit of a Goth clique at my high school who were really into this type of music. As I have stated in all of my blog posts, the music that you decide that you would like to add to your Charleston wedding  DJ playlist should clearly define your musical tastes.

The Best 80s Alternative Cocktail Hour Wedding Playlist  is just one of the many countless playlist ideas that you can consider for your wedding. Ok, let's begin the time warp journey back to the days of big hair and at times, black nail polish and lipstick. Turn up your speakers now.
Download These 80s Alternative Songs From Charleston Wedding DJ Mike Bills On Spotify NOW
Ain't life grand when it comes to obtaining our music these days? Where would we be without streaming services like Spotify these days? If you are a modern bride and groom who is into their 80s music (especially alternative), you are invited to head over to my Spotify to download this playlist. When you get over to Spotify, all you need to do is search for DJ Mike Bills.

"There's A Light That Never Goes Out" | The Smiths | 1986
This song is one of the my favorites from The Smiths, and was actually added into a cocktail / dinner playlist by one of my 2015 couples. "Whitney & Trey" who had their amazing wedding ceremony and reception out at the lovely Middleton Place. While this song was written and recorded from their album "The Queen Is Dead" in 1986, it was not released in England until 1992.

Driver 8" | REM | 1985
Originating from one of the biggest music meccas in the South, (Athens, Georgia), REM had a distinct sound in their music. Their alternative sound combined with the voice of lead singer Michael Stipe saw the band in heavy rotation on college radio stations during the 80s.

"Goody Two Shoes" | Adam Ant | 1982
Adam Ant used to have a band "Adam & Ants", but it broke up in 1982. This song was a staple on the early days of MTV and became one of those iconic videos in rotation.  It was his biggest hit asa solo artist, reaching Number 12 on the Billboard Hot 100 charts.

"Love My Way" | Psychadelic Furs | 1982
Released back in the summer of 1982, this song was another one of the videos in rotation during the first year of MTV.  You might have also remembered this song from the 80s movie "Valley Girl", as well as the soundtrack for The Wedding Singer back in 1998.

"I Melt With You" | Modern English | 1982
"I Melt With you" was another song you might remember from the 80s flick "Valley Girl". If you also remember the 2004 movie "50 First Dates", Jason Mraz did a great cover of the song. After all, your wedding day is the biggest day of your life up to this point. The song comes up with it perfect lyrics for your Charleston wedding too; "I'll stop the world and melt with you" :)

"So Alive" | Love & Rockets | 1989
The summer of 1989 saw one of the great alternative bands of the 80s become more mainstream with this amazing song.  The song went all the way to Number 3 on the Billboard Hot 100 charts and is the perfect addition to your 80s Alternative And Synth Cocktail Hour Playlist.

"Situation" | Yazoo | 1982
Yazoo would later morph into another 80s band "Erasure" and have another string of Top 20 hits. However, in 1982, they were way ahead of their time with their album "Upstairs At Eric", which featured this very danceable classic.

"Let's Dance" | David Bowie | 1983
Wow. It's still hard to believe that David Bowie has been gone over 2 years now.  This song will get your guests excited and loosened up after youe wedding ceremony and get them ready for a great night of dancing coming up after dinner.

"Deadman's Party" | Oingo Boingo | 1985
Oingo Boingo was the quintessential synth pop / alternative band of the 80s. This was the title track of the album released in the fall of 1985. If you are fan of the 80s "coming of age" movies that were directed by the late John Hughes, you might remember this song from "Weird Science"

"Lips Like Sugar" | Echo & The Bunnymen | 1987
If you are into cover songs, Echo & The Bunnymen did an excellent cover of "People Are Strange" by The Doors. However, back in the summer of 1987, they released this song as their second single from their debut record.

"Come Dancing" | The Kinks | 1982
The Kinks broke onto the music scene back in the 60s with songs like "You Really Got Me" and 1970's "Lola". They were still making music in the early 80s, as this song was another one of those videos you saw in rotation during the first year of MTV.

"No More Words" | Berlin | 1984
Long before the release of "Take My Breath Away" in 1986 for the Top Gun Soundtrack, Berlin were a force in the Los Angeles new wave / alternative scene. This song was the first track to be released off their 1984 album "Love Life"

"Just Like Heaven" | The Cure | 1987
You couldn't talk about alternative music back in the 80s without mentioning The Cure. Goth girls had crushes on lead singer Robert Smith and by the fall of 1987, they were heading to the record stores to buy the album "Kiss Me, Kiss Me, Kiss Me" so that they could hear this song. It hit Number 40 on the Billboard  charts in early 1988.

"Blue Monday" | New Order | 1983
Blue Monday has a long life throughout the 80s. It was first released in 1983, then in 1985 as a 7 inch single. In 1988, another remix was released and went on to be Number 1 outside the United States. New Order were one of the great synth pop and alternative bands of the 80s.

"Blister In The Sun" | Violent Femmes | 1983
Originally released on the Violent Femmes self-titled album back in 1983, the song became sort of a cult classic with the release of the John Cusack movie, Grosse Point Blank.

"Wishing (If I Had A Photograph Of You) | A Flock Of Seagulls | 1983
While this song did not become the signature song that "I Ran (So Far Away)", this is one of my favorites and should have been the theme song for Match.com or Tinder.

"The One Thing" | INXS | 1982
"The One Thing" was actually my introduction to the band (compliments of MTV) back in the summer of 1982.  You can find this early 80s classic on the album Shabooh Shoobah, released in the fall of 1982.

"Genius Of Love" | Tom Tom Club | 1981
The TomTom Club were a band that Tina Weymouth and Chris Frantz of the Talking Heads formed in the early 80s. "Genius Of Love" would top the  Billboard Hot Dance charts after it's release in 1981.

"Here Comes Your Man" | The Pixies | 1989
The Pixies would release one of their signatures songs just in time for the summer of 1989. The song reached #3 on the Billboard Modern Rock Tracks chart.

"Tenderness" | General Public | 1984
Hearing this song makes me want to pull out the Ferris Bueller's Day Off DVD, or maybe dust off the Weird Science DVD too. "Tenderness" was released in the spring of 1984  but would only make it as high as #27 on the Hot 100 chart.

"In A Big Country" | Big Country | 1983
Big Country had one of the most popular 80s One Hit Wonders with "In A Big Country".  Despite the video for the song being in heavy rotation on MTV, the song only managed to break into the Top 20 of the Hot 100 (#17), but peaked at #3 on the Mainstream Rock chart.

Want To Set Up A Consultation With One Of The Top Wedding DJs In Charleston?
That was fun! I love the 80s. Anytime that I can relive some of my youth with a blog post is always a great time :) Sharing these musical blog posts with my current and prospective clients is a passion of mine. Thank you for reaching the end of another one of my blog posts and taking a short trip into my musical world. Mike Bills Entertainment is one of the rare DJs in Charleston who is ALL ABOUT the MUSIC. It's that laser focus on the music that has caused my company to garner an incredible reputation of providing brides and grooms all over Charleston with a truly incredible soundtrack for the biggest day of their life. If you are recently engaged and want to set up a time to talk to one of the top wedding DJs, click the link up above.  I love to talk to couples about their wedding music and would love to be the DJ at your Charleston wedding.