The Best 15 Songs For Last Dance At Your Charleston Wedding

All of my brides and groom meticulously choose all the important songs of their wedding day. Whether that be the bridal party introduction, their all-important choice for their first dance, the sentimental father / daughter dance, or the wonderful moment between the groom and his mother (mother / son dance). They often glaze over a pretty important song of the night. The last dance. Your wedding is going to be one of the happiest days of your life, at least if you hire the right professional wedding DJ ;) You are your guests might actually start to get a little teary-eyed toward the end of the night, but I can assure you they will be tears of joy. Weddings cause an intense range of emotions. The end of the wedding reception is the culmination of months and years of planning. For whatever reason, a lot of brides and grooms don't seem to put much emphasis on the last dance of the night, but as a professional wedding DJ, I think the last dance song is very important to the overall lasting memories generated by the soundtrack to your Charleston wedding.

My recommendation for the end of the night is actually two-fold. Before the actual last dance song (which is generally upbeat), I like to throw on a slow jam to get everyone out on the dance floor with their prospective partners in preparation for the grand finale.  This gives your wedding guests a little bit of a breather from the earlier upbeat portions of the wedding playlist. That last dance of the night is going to be celebratory and very upbeat. It should be a song that gets everyone excited by putting their hands in the air and singing along with the chorus! It'll be a song that puts a big fat exclamation point on your wedding day with you and your fiance, friends, and family celebrating one last time beofre the night ends. One more thing to consider about the last dance, it's going to be one of the impactful songs of the night and will be one of those memories of your wedding day that will have you and your guests smiling for years and years down the road. 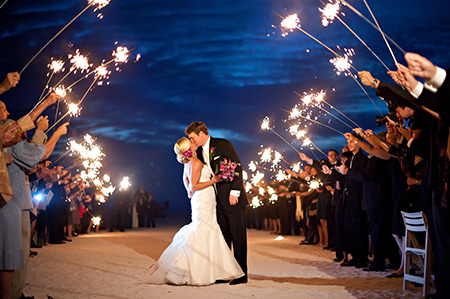 Be Sure To Download These 15 Best Last Dance Songs From Spotify Right NOW
As one of the top wedding DJs in Charleston, I've decided to meet all my brides and grooms right where they are. Where exactly are they? Most all of them stream their music and discover their favorite new songs online.  By heading over to my Spotify profile, you'll not onlt get this playlist, but also be greeted by numerous other playlists to help you plan the music for your big day. Just head over to Spotify and search for DJ Mike Bills.

"Let's Go Crazy" | Prince
For those modern brides and grooms who are really into their 80s music, this last song of the night is definitely for you. I invite you to purchase the Purple Rain album and grab this one. It starts out slow, but I promise that it will not disappoint as it gets going.  This is probably one of the most overlooked songs for the last dance of the evening.  Listening to the song will probably make you want to dust off the DVD and throw the movie in, but hey that's awesome music planning. Released in the summer of 1984, the song would peak at #1 on the Billboard Hot 100.

" I've Had The Time Of My Life" | Bill Medley & Jennifer Warnes
The mother of all last dance songs for all sure. Your wedding day and night is going to be the time of your life guaranteed with the right mix of music.  The bride and groom could re-enact this final scene below of the classic movie "Dirty Dancing" around their family and friends and make for a very memorable ending of the biggest day of your life. If you are a bride and groom who really enjoy this movie and the associated with it, you should also check out this post about some of the best music from Dirty Dancing for your wedding playlist.

"Last Dance" | Donna Summer
At first glance, "Last Dance" may appear cliche, but its another one of those songs that starts out slow and increases energy throughout and will get your friends and family excited and end your wedding night with a bang. The song appeared on the soundtrack to the movie Thank God It's Friday and would peak at #3 on the Billboard Hot 100.

"Closing Time" | Semisonic
Over the years, this song has sort of become "cliche", but when I hear this song, I'm taken back to the summer of 1998. Have your wedding DJ throw this song on shortly after last call. One last call for alcohol, finish your whiskey and beer and celebrate the fact that your wedding day is just about over.  "Closing Time" would peak at #1 on the Billboard Alternative chart.

"Sweet Caroline" | Neil Diamond
Another popular choice for the last dance of the night. It's a song that everyone knows and loves because those "good times never seemed so good" throughout your entire wedding day and night.  Since Charleston gets a lot of couples who travel down here from New York City, New Jersey, New England, or any other northern states, this song is in heavy demand.  "Sweet Caroline" would be released in May of 1969 and would become one of the songs of the summer of 1969. The song would peak at #4 on the Hot 100 by the end of the summer.

"The Last Dance" | Frank Sinatra
This is a little bit more subdued than the first five selections on this list but can be equally as impactful.  Check out the song below, and if you like it, look it up on Sinatra's 1959 record "Come Dance With Me" .

"Bohemian Rhapsody" | Queen
Yeah, that's right "Bohemian Rhapsody". Channel your inner Wayne's-World to the end of your wedding night. Another one of those songs that starts out slow, but certainly increases in intensity to the point where you and your guests are all bobbing your heads toward the end of the song. Why wouldn't you want what is considered by many to be the greatest song ever to be the last dance of your special day?

"Bye Bye Bye" | NSync
Nothing wrong with a little early 2000s boy band action at the end of the night.  It peaked at number 4 on the Billboard charts, and could be an equally great hit for you and your guests at the end of your wedding day over at Harborside East or the Creek Club at Ion.

"Save The Last Dance For Me" | Michael Buble
Michael Buble's version of this classic has been showing up on lots of playlists recently at Charleston weddings, and for good reason. It's fun and upbeat and just the perfect way to wrap up an incredible night with friends and family. You can find the Buble version of this classic on his album It's Time. "Save The Last Dance For Me" was released back in the spring of 2006 and would peak at #5 on the Adult Contemporary chart.

"Take Me Home Tonight" | Eddie Money
We're getting to the end of the night and this is an ideal song to play for great excitement for the last dance of the night. 80s rock at its finest. Feel free to take a listen to this 80s classic by clicking the link in the song title.  This very popular 80s song for the last song of the night was released in August of 1986, and would peak at #4 on the Billboard Hot 100. Interested in adding more 80s to your wedding playlist, be sure to check out my Volume 1 of the Best 80s Songs For Your Wedding Playlist.

"Mr Brightside" | The Killers
"Mr. Brighside" was actually the very first single released by The Killers back in the fall of 2003, and then re-released in 2004.  The Killers would score a Top 10 song on the Hot 100 chart, and break into the Top 5 on the Alternative Song chart.

"I Love It" | Icona Pop & Charli XCX
Icona Pop would join forces with Charli XCX to release what would become one of the top songs of the summer of 2012.  "I Love It" would eventually reach #7 on the Billboard Hot 100 chart.

"Hips Don't Lie" | Shakira  & Wyclef Jean
In the year since this song was released back in the spring of 2006, "Hips Don't Lie" has become one of the most requested dance songs of the 2000s. The song would make it all the Number 1 on the Billboard Hot 100 chart.

Care To Hire Mike Bills As Your Wedding DJ?
Hopefully these fifteen songs give you some inspiration in choosing the last dance song of your wedding. For even more ideas for the last dance song, be sure to check out this playlist . When you click over to the other post, you might see some of the songs on this playlist. Make it exciting. Make it fun. But, even more importantly, make it memorable. Let your DJ know what it is you want to hear. Thank you for finding this blog. This blog will be the most detailed Charleston Wedding DJ blog in the area. It will constantly be filled with DJ playlist ideas, DJ tips and other important planning information to help you design the absolute perfect playlist for your upcoming Charleston wedding.  Mike Bills Entertainment is an owner-operated DJ company in Charleston who absolutely loves music and whose PASSION is making sure the music is PERFECT for your wedding. Be sure to click the link up above to be taken over to my contact form so that you can fill and tell me some of the important details of your wedding. At which time we can then set up a time to discuss your wedding day. I am very friendly to destination brides and grooms. I would love to be your wedding DJ and I look forward to speaking with you.