Ep. 6 The Mike Bills Podcast | Do Not Play Songs | Most Hated At Weddings

More often than not, I've noticed that the modern bride and groom of today are opting to keep the sound of their wedding "independent" of any other wedding that they have been to previously. What exactly does this mean? Well, for one, lots of today's brides and grooms are really into their music and are very interested in creating a soundtrack for their special day that's about "them".  They simply do not want the normal, boring wedding songs that have been overplayed and whose burnout factor are at maximum levels in 2019. The inspiration for today's episode of The Mike Bills Podcast came from the reminder of an anniversary of one of past clients. John & Megan were married at The Pavillion At Pepper Plantation back on November 30, 2013.  They were a very fun couple to work with and we actually still keep up with each other on Twitter 6 years later. It was their Do Not Play List that provided the content for today's episode of The Mike Bills Podcast. As one of the top Charleston Wedding DJs. allowing my brides and grooms the latitude and freedom to create a Do Not Play List is one of the integral parts of the music planning process to ensure the sound is perfect for your most special day here in Charleston.  The most professional wedding DJs will always recommend a list of Do Not Play Songs. You'll want to read on, but I cannot be responsible should your ears begin when you listen to this week's episode.

By the looks of their Do Not Play List, you could tell that John & Megan had a very particular musical taste. I believe their playlist featured a lot of fun music from the 90s like "Shiny Happy People" from REM, and a "time warp" so to speak to the classic movie "The Rocky Horror Picture Show" with The Time Warp. Looking back it was a very fun night. Down below you'll a snapshot of their Do Not Play List. 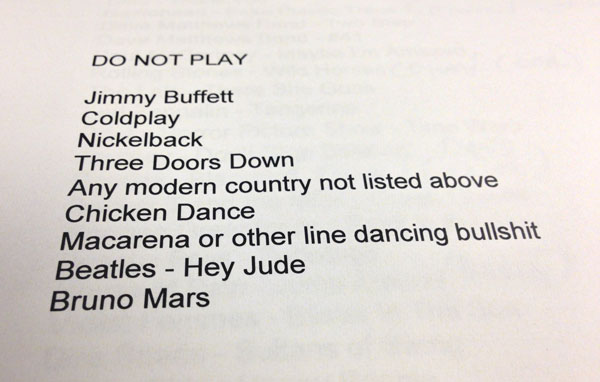 As you can see, they had quite a bit of laser focus when it comes to what they did NOT want to be played at their wedding.   While Jimmy Buffett has roots in Charleston, his music at Charleston weddings has been in much decline over the past several years. Coldplay & Nickelback are pretty polarizing when it comes to music fans. Most people either love them or hate them, but neither really has a place on a wedding playlist. Recently, I had a bride and groom select 2011's "Paradise" by Coldplay as their recessional song at their ceremony, but that's about it. Three Doors Down does not really have any "wedding-worthy", unless you  request "Here Without  You",  which for obvious reasons should not be played. Modern country is tough to play at weddings because alot of it is slow and has a tendency to disrupt the flow and tempo of the night. The Chicken Dance, as well as other line dances are continuing to be placed on Do Not Play Lists for the fact they are overplayed and tend to be cheesy.  "Hey Jude" by the Beatles is a bit long. If it were to get played, it might get thrown on during a specialty cocktail hour.  The big shocker on their Do Not Playlist was the Bruno Marrs, which is pretty great demand these days at weddings around the Holy City, but I have found with some couples that he is quite polarizing too.

Down below, we'll take a look at some of the most hated songs at Charleston weddings. Be prepared to cringe just a bit, but enjoy this and take notes so when we get together you'll be able to know which ones to keep off your wedding playlist.

"Strokin" | Clarence Carter
I know what you are saying. "Who is Clarence Carter?" All 20-something brides and grooms were not born when this corny song was released back in 1986.  Watch the video down below to see why it never charted on Billboard and MTV shied away from playing the song too.

"Gangnam Style" | Psy
In the world of music, 2012 seems like an eternity ago. "Gangnam Style" was released in the summer of 2012, and by the fall of that year, it would become a Number 1 song in 30 countries, and heard on dance floors at weddings around Charleston. Despite it's popularity, brides and grooms have moved on and are leaving the song off their wedding playlist.


"Boot Scootin Boogie" | Brooks & Dunn
Country line dances are very much becoming a thing of the past at weddings all around Charleston. Despite it being a Number 1 song on the country charts in the early 90s, most modern brides and grooms have forgotten about Boot Scootin' Boogie.


"Celebration" | Kool & The Gang
Those epic weddings that your mom and dad were a part of the 80s and 90s probably had this song at the top of the DJ's playlist. However, as we approach 40 years since it's release, the song is worn out and is staying off Charleston wedding playlists.


"Cupid Shuffle" | Cupid
In a few months, this once, fairly popular wedding classic will enter it's teenage years.  Back in 2007, DJs were playing it in bars and clubs, and weddings.  Brides and grooms are opting to keep it off their playlist because of their fatigue with line dances.


"YMCA" | Village People
Disco died in the very early 1980s and despite this song one of the only singles to sell an astounding 10 million copies, brides and grooms are burned out of it. They also find it a tad cheesy what everyone does when the song comes in with all the hand motions. Down below you'll see a photo of the Village People when I saw them with KC & The Sunshine Band at Boone Hall Plantation in July 2010. 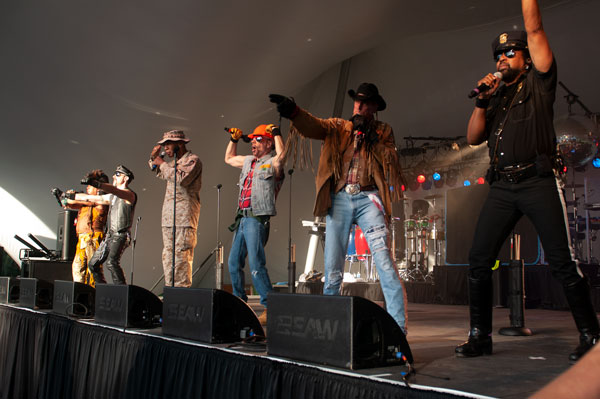 
"Macarena" | Los Del Rio
Who knew the Number 1 song on the Billboard Hot 100 charts in the spring and summer of 1996 would become one of the most hated songs of all time at weddings?  The people of the UK can thank "Wannabe" by the Spice Girls for keeping it out of the Number 1 spot across the Atlantic.


"The Hokey Pokey" | Ray Anthony
I remember my teacher in kindergarten showing us how to do the Hokey Pokey. That was over 40 years ago. While I've never gotten a request for this song, modern brides and grooms will opt to leave it off their playlist because it's a tad bit campy.


"Electric Slide" | Marcia Griffiths
In 1994, when I was able to legally enter a nightclub (after my 21st birthday), DJs were playing "The Electric Slide" as a part of their sets. Now, a DJ would be fired for even "thinking" about playing this song.  My oh my have times changed!


"Cotton Eye Joe" | Rednex
The 10th and final song on this plist of songs is probably the one that shows up on the most Do Not Play Lists. If it is played, it's usually played very late at night when everyone is inebriated.

Other Notable Inappropriate, Often Misunderstood Songs
The following songs are ones that we all know and love, but don't really belong on wedding playlists due to lyrics as well as their meaning.
"I Will Always Love You" | Whitney Houston
This cover of the Dolly Parton 70s classic appeared in the movie "The Bodyguard" in 1992.  While it can tug at your heart and make you feel all warm and fuzzy, it's actualyl about a breakup.
"I Will Survive" | Gloria Gaynor
Later covered in the 90s by Cake, this is another song about breaking up and starting over.
"White Wedding" | Billy Idol
Even if Billy Idol is not really trying to prevent his ex-girlfriend from marrying someone else, it's probably not a good idea to throw this one at your wedding at Lowndes Grove.
"Every Breath You Take" | The Police
Songs about boyfriends stalking their ex's are probably not a good idea on wedding playlists.
"Gold Digger" | Kanye West
Great song, but have the DJ play it at your after-party at your favorite club.
"It Must Have Been Love" | Roxette
You'll find this song on the Pretty Woman movuie soundtrack, which starred Julia Roberts in 1990.  The fact she sings "it must have been love, but it's over now...." is why this song should be left off your playlist. I still love you Roxette.

Care To Speak With Mike About Your Charleston Wedding?
Be sure to download Episode 6 of The Mike Bills Podcast to learn about even more inappropriate, yet often misunderstood songs to leave off your wedidng playlist. Thank you for your interest in my new podcast. Released back on November 1,  2019 , The Mike Bills Podcast is the perfect opportunity to get inside the mind of one of the top wedding DJs in one of the most visited wedding destinations in the country.  You may download this episode of the podcast by clicking the links down below. The podcast is also available on the IHeart Radio podcast network. If you like what you see this blog and website, please head over and fill out a contact form and let's begin to plan the music for your Charleston wedding.