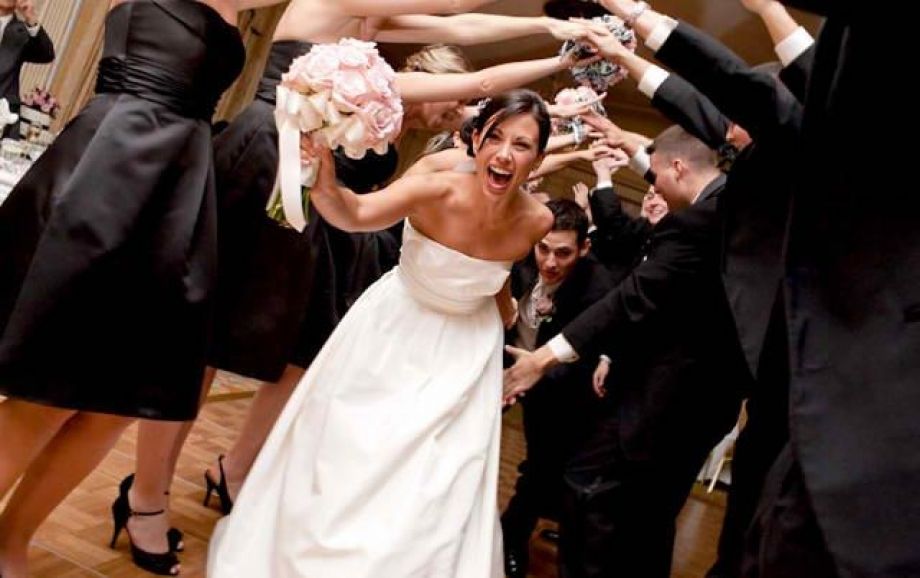 The introduction of your bridal party to your wedding reception has the potential to be one of the spotlights of the evening or maybe a little less dramatic if all you would prefer is just you and him to be introduced. For larger bridal parties, some couples opt for JUST the bride and groom to be brought with usually a snippit of an upbeat and cheery song, which is faded right into their first dance. It really is up to you how formal you'd like to be.  The bridal party introduction song should be fun and upbeat and an excellent way to kick start your wedding reception.

For the larger bridal parties, sometimes couples decide to just be a little more informal and just announce the first names like "Jennifer and Mike" or "Cindy and Steve". Sometimes bridal parties like to play a snippit of each song for each couple. If you are interested in having your wedding DJ play a snippit of a song for each one of the couples of your bridal party, let them know well in advance, as there would be increased preparation of your music before your wedding day arrives.I hope you enjoy listening to all these great songs, as much as I enjoyed hunting them down on You Tube for you.

Download These Fun Bridal Party Introduction Songs From Spotify NOW
What could be more fun than you and your fiancee logging onto Spotify to begin selecting songs for your upcoming wedding? As a courtesy to all of the modern brides and grooms who have hired me over the years as their wedding DJ, I've built a Spotify profile designed to provide maximum inspiration when sitting down to create the perfect wedding playlist. When you head over to Spotify, just do a search for DJ Mike Bills.

"Happy" | Pharrell Williams
You might remember "Happy" being featured in the 2013 movie Despicable Me 2. The song was released in the fall of 2013 and would become one of the most popular requests at 2014 weddings.

"Marry You" | Bruno Marrs
There has always been some debate from some of my clients about whether to throw this song on their wedding playlist based on some of the lyrics in the song.  Regardless, the song simply was not of the big hits from Bruno only managing a peak at #85 in 2011 on the Hot 100.

"Raise Your Glass" | Pink
You just had your wedding ceremony and are being introduced by your wedding DJ into your reception to begin the biggest of your life. It's definitely an excellent time to raise a glass or two or three or four.  The song was released in October of 2010 and would become the third song to reach #1 for her on the Hot 100 chart.

"Sam Huff's Flying Raging Machine" | Lettuce
Looking for an amazingly fun and "funky" bridal party introduction song, you should choose this song by Lettuce. It was personal request by one of my couple's back in 2015. For more songs for your wedding playlist that are on the funky side, be sure to click over to the preceding link.

"Uptown Funk" | Bruno Marrs
When Mark Ronson collaborated with Bruno Marrs in the fall of 2014, who knew the song would garner over 3.8 billion view on You Tube? The song has become one of the most requested songs on wedding playlists since it's release, and is an excellent way to get the party started at your wedding.

"Walking On Sunshine" | Katrina & The Waves
For the modern bride and groom who have a love affair with 80s music, this Top 10 song from 1985 is the perfect upbeat song to get the party going.

"Pumped Up Kicks" | Foster The People
Ah yes, we've reached the portion of the bridal party introductions where we talk about Indie pop. "Pumped Up Kicks" was released back in September of 2010 and would peak at #3 on the Billboard Hot 100.

"Take On Me" | A-Ha
I could be wrong but I thought I read that "Take On Me" became the first 80s music video to reach 1 billion views on YouTube. It definitely is one of the most requested 80s songs by  alot of my clients. Released in the fall of 1984, the song would peak at #1 on the Billboard Hot 100.

"Can't Hold Us" | Mackelmore & Ryan Lewis
Mackelmore and Ryan Lewis would put out some of the most popular wedding music in the early 2010s. "Can't Hold Us" can be found on the album The Heist released in 2011. "Can't Hold Us" would peak at #1 on the Hot 100 and is an excellent choice for the bridal party who doesn't want to be held back from having an incredible party at your wedding reception.

"Waiting For Tonight" | Jennifer Lopez
Time to go to the late 90s when Jennifer Lopez releases the album On the 6 and this track would be released. "Waiting for Tonight" would be the first song by J-Lo to peak at #1 on the Hot Dance Club songs chart.

"Thunderstruck"
The album was Razor Edge released in 1990. "Thunderstruck" would be the first single to be released form the album and would peak at #5 on the Mainstream Rock chart.

"Young Folks" | Peter Bjorn & John
And now for another cool Indie pop song idea for the bridal party introduction at your wedding reception. Peter Bjorn & John would release "Young Folks" back in 2006 and the top would peak at #16 on the Billboard Adult Alternative Chart. If you don't wish to use this song for the bridal party introduction, feel free to have your wedding DJ throw it on for your Indie Cocktail Hour.

"Shut Up And Dance" | Walk The Moon
Easily one of the most popular songs since it's release, "Shut Up And Dance" is not only a great choice for the bridal party introduction, but it's also a great song that can be used to get the party started.

"Forever" | Chris Brown
"Forever" by Chris Brown garnered "viral attention" when a video surfaced on You Tube of a bridal party using it for their wedding.  "Forever" was released back in the spring 2008 and would become one of the biggest songs of the year in 2008.

"Good Life" | One Republic
You are getting ready to be introduced to what will become one of the happiest nights of your life being around your friends and family.  "Good Life" was released in the fall of 2010 and would peak at #1 on the Adult Top 40 chart. The song is also featured on my Come On Get Happy Cocktail Hour Playlist

"Electric Feel" | MGMT
From the album Oracular Spectacular, "Electric Feel" would be released during the summer of 2008.  While the song did not chart in America, it would peak at #7 on the Australian singles chart.

"We Are Young" | Fun. Feat Jonelle Monae
When you are planning the music for your wedding playlist, your songs should be Fun.  In 2011, Fun. would collaborate with Janelle Monae for "We Are Young".  The song would peak at #3 on the Billboard Hot 100 chart.

"Glad You Came" | Wanted
Ah yes, the "boy band" portion of this list of some of the most popular and fun bridal party introduction songs. "Glad You Came" would be the second song to be released from their album Battleground in the summer of 2011. "Glad You Came" would peak at #3 on the Hot 100. If you have a guilty pleasure for Boy bands, be sure to check out my playlist of 25 songs from the top boy bands.

"Song 2" | Blur
If it's 90s alternative you are interested in for your bridal party introduction, you should take a listen to this track.  "Song 2" was released in the spring of 1997 and would peak at #6 on the Alternative songs chart.

"Rock And Roll All Nite (live) | KISS
I discovered KISS as a very young kid following my sisters to the record store. While in the record store, I found myself flipping through the albums and came across these 4 painted faces and was mesmorized.  Rock And Roll All Nite was released in 1975, but it's the "live" version that still gets people (including myself) excited when it comes on the radio.

"The Walker" | Fitz & The Tantrums
Fitz & The Tantrums being on this playlist of popular bridal party introduction songs has reminded me that I need to put together a cocktail hour playlist of modern rock from the 2010s. "The Walker" was the follow-up to the single "Out Of League" and was released in December of 2013.  The song wouldpeak at #1 on the Alternative songs chart.

"Hey Ya" | Outkast
"Hey Ya" is one of those songs you can throw on at any time during a wedding reception and people will respond and pack the dance floor. It's also been known to be used for the bridla party introduction song. "Hey Ya" would be released in the fall of 2003 and become one of the most requested wedding songs since it's release.

"Glamorous" | Fergie
Fergie's debut record was titled The Dutchess, and it was released back in 2006. "Glamorous" was the third song to be released from the album and would peak at #1 on the Billboard Hot 100, as well as the Dance Club Songs chart.

Wanna Speak With Mike Bills About Hiring Him To Be Your Wedding DJ?
Thank you so very much for making it to the end of this blog post. Since this iteration of my website was launched, it's been my goal to continue to provide my current and prosperctive clients some of the freshest content on the web. If you like this blog, check out all the preceding blog entries about music and planning the perfect playlist for your wedding. Be sure you click the link up above to be taken over to my contact form so that you can give me some details about your upcoming wedding day. I really would loveto DJ your wedding here in Charleston. For even more ideas on some of the most requested songs for the Bridal Party Introduction, be sure ot check out theis link.