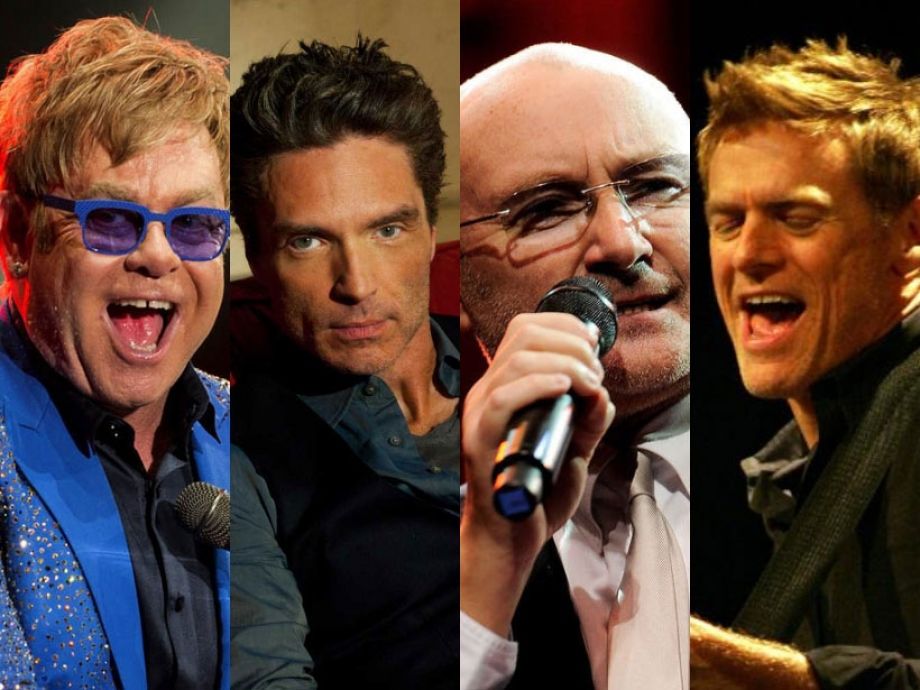 The dinner music portion of your afternoon or evening should include non-abrasive music that allows for good conversation and socializing among you and your wedding guests. Your Charleston Wedding DJ should adjust the volume of the music accordingly. Brides and grooms tend to go in numerous different directions when it comes to selecting music for this portion of the evening. Some couples go for a light country, or perhaps the tried and true jazz standards like Frank Sinatra or even Motown. Soft rock is a genre that maybe your parents listened to (chuckle), and maybe that's why these songs are often overlooked when selecting wedding music. Back in the 70s and  throughout the 80s, there were numerous romantic songs written that are just perfect for dinner at your Charleston wedding at Lowndes Grove, Kiawah, or the Carriage House at Magnolia Plantation.  If you are a fan of the 80s and songs that are a little on the softer side, you'll love this post.

Take a listen to these songs down below as you begin to create your wedding playlist.   You can click the title of each song to play a YouTube, or check out my Spotify playlist right below.

"You're The Inspiration | Chicago | 1984
This song was actually written by David Foster and originally the great Kenny Rogers was supposed to sing it, but when Peter Cetera and Chicago got a hold of it in 1984, they turned it into a mega hit, and it might be just perfect for a couple to do their first dance to as well.  Released in the fall of 1984, the song would make it all the way to #1 on the Adult Contemporary chart.

" Faithfully" | Journey | 1983
This song shows up very frequently on wedding playlists around Charleston and is a true gem from the early 1980s. Over the years, this has been one of the most requested songs behind "Don't Stop Believin". The song would peak at #12 on the Hot 100 in the summer of 1983.  Journey was just inducted into the Rock & Roll Of Hame in 2017 for classics like this. Go ahead, jot this one down. You know you want to.

"Take My Breath Away" | Berlin | 1986
From the Top Gun soundtrack, "Take me to bed or lose me forever". Sound familiar? Need I say more in regards to this epic 80s makeout song? "Take My Breath Away" was the biggest makeout of the summer of 1986 making it all the way to Number 1 on the Hot 100.   If you like, we'll add this terrific track your wedding playlist and we'll lower the lights when it gets played or you and he can step outside and steal a smooch while you overlook the view at the Historic Rice Mill in downtown Charleston.

"I Guess That's Why They Called Them The Blues" | Elton John | 1983
A light rock classic from Elton John that was released in Britain in April 1983 and climbed all the way to Number 4 in the United States. If you are a military couple, take a look at the video for this song and you'll see why you might want to add it into your dinner music playlist.

"Heaven" | Bryan Adams | 1985
1985 might have been the biggest in young Bryan Adams' career. It was the year that he released "Reckless", an album that featured "Summer of '69", "Run To You", "Somebody", "It's Only Love (featuring Tina Turner", and this lovely song for every couple who wants to feel as though they are in "Heaven" on their wedding day. "Heaven" would be the first number one song in what would become a highly successful musical career.

"Bette Davis Eyes" | Kim Carnes | 1981
An amazing track by the lovely voice of Kim Carnes that spent 9 weeks at the top of the charts in 1981 and would sound excellent on your playlist out at Pepper Plantation, Lowndes Grove or Magnolia Plantation.

"Hungry Eyes" | Eric Carmen | 1987
Eric Carmen made a brief comeback in the 80s right around the time of Dirty Dancing hitting the movie theaters. This would be an excellent addition to any dinner music playlist where you might steal a kiss from your significant other.  Released in November of 1987, "Hungry Eyes" would go to hit #4 on the Hot 100, and #2 on the Adult Contemporary charts.

"The Lady In Red" | Chris Deburgh | 1986
An incredibly beautiful song that has certainly been used for a first dance song, but even more often for the dinner music hour. For that one or two women at your wwedding who may wear that red dress to your wedding. Released in the summer of 1986,  "The Lady In Red" would top the UK single charts, and the top 5 on the Billboard Hot 100.

"A Groovy Kind Of Love" | Phil Collins | 1988
Phil Collins covers this 60s classic by the Mindbenders perfectly and the texture will go very nicely with your other dinner music selections.  Released in the late summer of 1988, Phil Collins would score another #1 song on the Hot 100, as well as the adult contemporary chart with this cover song.

"I Don't Want To Live Without You" | Foreigner | 1987
Foreigner morphed into a more soft rock band in the mid to late 80s with some like songs like this after their hard rocking 1970s debut.  Even with the success of other 80s soft rock songs, this song would be their only Number 1 song on the adult contemporary chart in May 1988.

"One On One" | Hall & Oates | 1982
The softer sounds of Hall & Oates can fit in well during your dinner music time of the evening, especially like this one from the early 80s. Hall & Oates could be no wrong through out the 80s. "One On One" would become a Top 10 hit on both the Hot 100 and Adult Contemporary charts in 1982.

"True" | Spandau Ballet | 1983
If you are into those "coming of age" movie from the 80s, you know this next song and will most likely throw it into your playlist for the day.  Watch the movie "Sixteen Candles" starring Molly Ringwald if you want to relive the classic movies of the 80s and this song. Released in the summer of 1983, "True" would top the UK Singles chart, and also make it to #4 on Hot 100 in America.

"Sara" | Starship | 1985
This is a given, especially if the bride is named "Sara". An 80s classic that fits perfectly into your dinner music playlist.  The song can be found on the album "Knee Deep In The Hoopla" and would become  Starship's second Number 1 in the spring of 1986.

"She's Got A Way" | Billy Joel | 1981
An early 80s classic by the Piano Man is an amazing addition to any wedding dinner mujsic playlist or an excellent choice for your first dance song. Truly beautiful and endearing song. Originally recorded and released in 1971, it would be the "live" version of this song which would become a hit for Billy, making it all the way to Number 4 on the adult contemporary charts.

"Right Here Waiting" | Richard Marx | 1989
Richard Marx was a hit machine back in the 80s and this track was the second to be released off his album "Repeat Offender" during the summer of 1989. Perfect for your wedding. The song would make it all the way to the top of the Billboard Hot 100 and Adult Contemporary charts making it one of the biggest songs of 1989.

"Alone" | Heart | 1987
This could be put into the 80s power ballad category (I am going to save that list for a future blog entry). Released in the mid 1980s during a resurgence from their hard-rocking 70s, Ann Wilson's voice still gives me goose bumps on this one. It reached Number 1 in the summer of 1987.

"Have I Told You Lately" | Van Morrison | 1989
In my opinion, this is one of the greatest love songs ever written. Later covered by Rod Stewart, Van Morrison knocks it out of the park with this classic from 1989. You can find this song on the album "Avalon Sunset". It would top the Adult contemporary charts in the fall of 1989.

"Penny Lover" | Lionel Richie | 1984
A beautiful ballad from the great Lionel Richie is a great addition to any dinner playlist! "Penny Lover" was the final song to be released from Lionel's album "Can't Slow Down".  It's the same album with "All Night Long" on it.  By December of 1984, the song would break into the Top 10 on the Hot 100 for a few weeks.

"Wind Beneath My Wings" | Bette Midler | 1989
From the movie "Beaches", you know that movie that you and your mom probably cried to as you were growing up? Yep, this is a true soft rock classic from the 80s and could also be used for the Mother / Son Dance.  The song was released in the early part of 1989 and would reach the top of the charts by June 1989.

"Smooth Operator" | Sade | 1984
Sade pops up all over the place when it comes to weddings. Her voice is perfect for any wedding playlist, including yours when you get ready to eat dinner at your reception at the William Aiken House in downtown Charleston. Released in September of 1984, the song was the third to hit radio and become a Top 5 song on the Hot 100.


Attention 80s Soft Rock Lovers!  Can't Get Enough Of Your Favorite 80s Soft Rock Songs? You've just reached the end of one of my most popular posts EVER. People from all over the world have viewed this post thousands of times. Interested in checking out the sequel post I did for more great soft rock music from the 80s? Click the image down below. 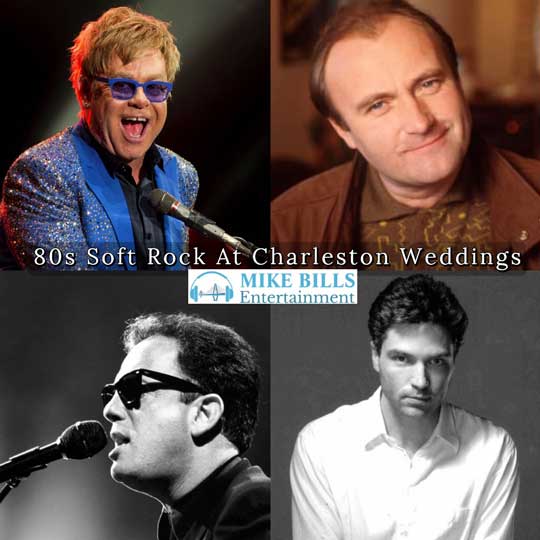 Interested In Booking Mike As Your Charleston Wedding DJ?  I hope you enjoyed playing all the songs on this blog post as much as I enjoyed putting it together for you. I also had a great time playing all these songs when I worked at WSUY-FM, in Charleston, SC, which was a top adult contemporary radio statio for it's time. As you can see, there are a lot of great 80s soft rock songs to consider when putting together the playlist for your Charleston wedding. Hopefully this list gave you some ideas on what you'd like to hear during dinner at your upcoming Charleston wedding. Are you ready to sit down and discuss the music for your wedding day? Looking to begin the process of finding the best Charleston wedding DJ for you? Check out the rest of my blog: Are you ready to book a true professional wedding DJ? Click HERE to schedule a consultation with Mike and we'll grab a coffee.