25 Most Requested Beatles Songs For Your Wedding Playlist

In my continuing desire to make the wedding music you choose about YOU and your fiance and the music YOU want to hear, I am kicking off a blog post series spotlighting some great ideas for musically themed cocktail hour playlists. The cocktail hour can really be whatever you want it to be; from bluegrass vibes to a laidback reggae chill vibe to a soft rock or even Motown vibe. What about a "Beatles" vibe, yeah he said an ALL "Beatles" cocktail hour? There is no denying it, the Beatles were probably the most influential band of the rock era. If you want pop, psychedelic, and just plain old rock, the Beatles had it all and then some. This list is composed of the classic tracks spanning their history, and also includes tracks from each of the band's member's solo efforts. Remember, it's YOUR wedding. The music should be about you, your musical tastes, as well as your friends and family. This is just one idea for a cocktail hour, as the possibilities are really endless and infinite just like your imagination.  The music you choose for your wedding is one of the most important decisions you'll make. If you are newly engaged and have begun the search for one of the top wedding DJs for your very special day in Charleston, I invite you to read over this blog and my website and check back here in the coming days for more excellent ideas for your wedding playlists.

Download The 25 Most Requested Beatles Songs For Your Wedding Playlist From Spotify NOW
Charleston Wedding DJ Mike Bills has made it even easier for you to organize all the music you'd like to hear on your wedding playlist. Most modern brides and grooms have been organizing the music for their wedding playlist on streaming services like Spotify, so Mike felt it was time for me to move over as well. Not only will you find this amazing playlist of top Beatles songs for your wedding, but you'll also find a wide variety of other playlists to hlep you choose the key songs for your big day.

"Blackbird" | [White Album] 1968
Sung by Sir Paul McCartney himself, but actually released on the White Album. It's a light, cheery track that could be played during a cocktail hour or even played during dinner.

"In My Life" | Rubber Soul | 1965
"In My Life" was released back in December of 1965 off the Rubber Soul album. The song was ranked by Rolling Stones as one of the 500 Greatest Songs Of All Time. "In My Life" has also become one of the most popular choices for the father / daughter dance by my clients over the years.

"Give Me Love" (Give Me Peace On Earth) | George Harrison | 1973 - Living In The Material World
They have always said that George Harrison was the "quiet" Beatle. Well, this track screams at me with so much love it's not even funny. Thank you George for this beautiful masterpiece and depending which kind of mood I am in, I am not afraid to admit that this song's beauty makes me shed a few tears. "Give Me Love (Give Me Peace On Earth" would hit Number 1 on the Hot 100 during the summer of 1973.

"#9 Dream" | John Lennon | 1974 | Walls And Bridges
A lesser known song that was to have come to the late John Lennon in a dream. After all your day is a "dream" come true. "Imagine" or "Woman" could also be added in if your a Lennon fan. Released at the end of 1974, #9 Dream would become a Top 10 hit for the late John Lennon.

"All You Need Is Love" | 1967
Released in the summer of 1967 as a single and written by John Lennon. There is not too much to add about this song only that "LOVE" is the theme and that is what your wedding is about. "All You Need Is Love" reached Number 1 on the Billboard Hot 100, which if you do the research was a recurring theme for The Beatles throughout the 60s.  "All You Need Is Love" shows up on my list of 35 Best Recessional Songs For Wedding Ceremonies.

"Here Comes The Sun" | 1969
Originally written by the late George Harrison, "Here Comes The Sun" is one of my favorite Beatles songs.  You can find the song on the Abbey Road album. For the 50th anniversary of the release of Abbey Road in 2019, the song would peak at #3 on the Billboard Hot Rock Songs chart. The late Nina Simone would cover the song in 1971, and is one of my favorite covers of the song.

"Sun King Medley" | Sun King, Mean Mr. Mustard, Polyethlene Pam, She Came In Through The Bathroom Window  Abbey Road. More love for the Abbey Road album. Back in the day, program directors of classic rock stations would play all of these songs back to back. It was one of those things that radio people would do before the days of "required playlists". 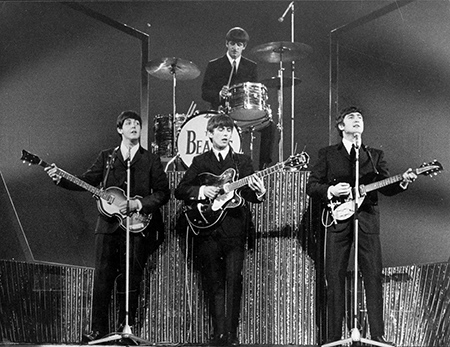 "Love Me Do" | 1965
"Love Me Do" was the very first single to be released by the Beatles. It was released in October of 1962 in England and would peak at #17, but would eventually hit the ariwaves in America and top the Billboard Hot 100.

"Daytripper" | 1965
The opening guitar giff of this song is one of my favorites of all time. "Daytripper" was actually released as the B side to "We Can Work It Out". The song was released in December of 1965 and would peak at #5 on the Billboard Hot 100.

"Something" | 1969
Did I not say this list would be Abbey Road intensive? Another awesome love song written by George Harrison and due to Beatles copyrights, there is no original Beatles version on You Tube, but below is a version performed by George Harrison at his famous concert in 1971. "Something" was released in the fall of 1969 and would top the Hot 100 chart in 1970.

"It's Only Love" | 1965
If you are a collector of all The Beatles records and their numerous releases, you would have two copies of this song. "It's Only Love" would appear on the UK release of  Help, and the American release of Rubber Soul.

"Beautiful Boy" | 1981
John Lennon | Released on his last album "Double Fantasy" right before he died in 1980, this is a common song for the speciality dance when the groom dances with his mother. Celine Dion would cover the song in 2004 and score a Top 20 single on the adult contemporary chart. "Beautiful Boy" has been a popular request over the years by my clients for the mother son dance song for their wedding playlist.

"Can't Buy Me Love" | 1964
"Can't Buy Me Love" is another one of the many, many signature songs written and recorded by The Beatles.  The song was released in March of 1964 from the album A Hard Days Night and would peak at #1 on the Billboard Hot 100.

"Ob-La-Di, Ob-La-Da" | 1968
The perfect song for your cocktail hour wedding playlist out at the Seabrook Island Club or Harborside East. You can find the song on the White album, released in 1968.  The song was released as a single in America in 1976 and would peak at #49 on the Hot 100.

"Got To Get You Into My Life" | 1966
Revolver is a favorite record of most Beatles freaks. This was a gem on it. Thank goodness you are permanently going to be in each other's lives forever. "Got To Get You In My Life" was released in the summer of 1966 and would peak at #7 on the Billboard Hot 100 chart.

"Penny Lane" | 1967
Not appearing on any album as it was a single released in February 1967. You might go ahead and this to your cocktail hour playlist full of the Fab Four over at Middleton Place. The song was a part of double A Side release with "Strawberry Fields Forever. The song would  make it all the way ot #1 on the Billboard Hot 100 and only #2 on the UK Singles chart.

"All My Loving" | 1963
"All My Loving" might be one of the most popular Beatles songs that was never released as a single in the United States.  It was only released in Canada, but did receive enough radio airplay to peak at #45 on Hot 100 in 1964.

"Twist And Shout" | 1963
One of the most requested Beatles song by my clients. The song was released in the spring of 1963 and would actually rechart in 1986 when the popular 80s movie Ferris Bueller's Day Off was in theaters.

Other Notable Songs By The Beatles For Wedding Playlists
For the sake of the amount of time it takes to put together these playlists, it was impossible to put in all of the most requested Beatles songs from over the years.  "Hey Jude" is a song that gets placed on a lot of Do Not Play Lists.  Songs like "Eleanor Rigby", "Yesterday", "Let It Be" and "I Saw Her Standing There" have also seen a lot of rotation at a lot of my weddings.

Looking To Hire Mike Bills As Your Wedding DJ?
Are you in the hunt for a wedding DJ who genuinely cares about the success of your upcoming wedding? Are you enjoying the content in this blog and ready to sit down and discuss the music for your wedding with a consummate professional ready to help you sculpt the perfect playlist? Click on the link up above to be taken over to my contact form so that you can fill out some quick information about your big day and get it over to me. I would love to be your wedding DJ. Let's talk soon.