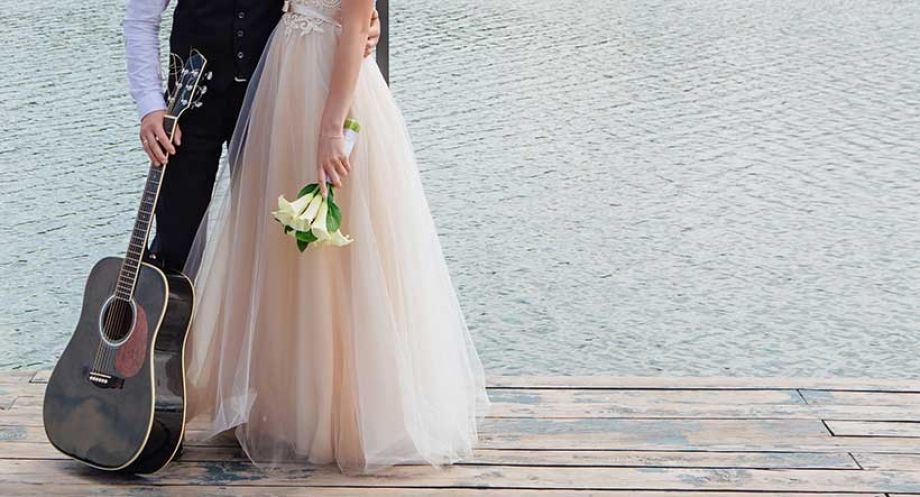 Your choice in what your first dance song at your wedding reception should be is one of the most important choices you make in your music selections. Ever since I've been blogging, I've published playlist ideas offering my clients some ideas about first dance songs, I decided to put a little focus on the Indie music genre for this post. While I still sit down with clients who are choosing traditional choices for their first dance, there are some modern brides and grooms who are seeking to have their special wedding dances not sound like all the other weddings they have been to. As one of the top wedding DJs in Charleston, it's my goal to stay on the cutting edge of these trends.  For those couples whose musical tastes tend to be a little more diverse, you'll want to read on and check out these beautiful Indie first dance song ideas.

Over the past 5-10 years, Indie music has steadily grown in popularity, and I've seen quite a bit of an increase on a lot of the playlists around a lot of Charleston weddings. A lot of the couples who have booked me in the past have been very much into their music. If this is you, choose a song that describes your love for one another. Even if you aren't interested in one of these Indie first dance songs, the same rules hold true;  Your first dance is a very memorable moment during your wedding reception where all eyes will be on you for this perfect moment.  Choose a song that has a deep meaning in your lives.   If you are really into Indie artists and their music, be sure to look up DJ Mike Bills on Spotify and listen to all the songs you see down below before making your decision. If you are not on Spotify, click each song title to bring up the song's You Tube.

"Saturday Sun" | Vance Joy
"Saturday Sun" is another great song by Vance Joy, who you might remember released "Riptide" back in 2014. You can find the song on his 2018 album "Nation For Two".

"Next To Me" | Imagine Dragons
"Next To Me" is another single released in 2018 from their album "Evolve". If you pick "Evolve" from your local record store, you'll also enjoy their big hits "Thunder" and "Whatever It Takes".  Take a listen to it down below and add it to your Charleston wedding playlist over at Lowndes Grove or Harborside East.

"Unlonely" | Jason Mraz
He just came to Charleston back in August, right after the release of his 6th album "Know". It's a very happy go lucky and a little upbeat for your first dance song over at Alhambra Hall or Pepper Plantation

"Wild Love" | James Bay
You can find "Wild Love" on James Bay's new album "Electric Light" which was released back in February of 2018.

"You Chose Me" | Scott Brothers
Wow! What can I say? Watch the video and tell me if this isn't one of the sweetest and most beautiful first dance song choices. It definitely will give Ed Sheeran's "Perfect" a run for its money. It's truly beautiful and perfect song that was released back in June 2018.

"Ho Hey" | The Lumineers
The Lumineers are one of the best American folk and indie bands to break into the mainstream over the past decade.  You can find 'Ho Hey" on their debut self-titled album released back in 2012.

"Kiss Me" Ed Sheeran
You can find "Kiss Me" on Ed's first album released back in 2011. "+" is the name of the album and also features his "The A Team"

"The Only One" | The Black Keys
"The Only One" is featured on the 2010 album "Brothers".  Be sure to take a listen down below as it's a little bit of an upbeat song for the first dance at your Charleston wedding

"The Way I Am" | Ingrid Michaelson
From her second album "Girls And Boys" back in 2006, you might have remembered some of the songs featured in Grey's Anatomy. Cute song here. If you don't use it for your first dance, have your DJ throw it in during dinner.

"You've Got The Love" | Florence & The Machine
This song is fresh in my mind because I am using it during the prelude of the ceremony at one of my upcoming weddings this Fall. You can find this beautiful song on the album "Lungs".

"Can't Help Falling In Love" | Beck
Beck does an amazing job on this Elvis Presley classic.  You can find this cover on the soundtrack to Resistance Radio: The Man In The High Castle.

"I Will Follow You Into The Dark" | Death Cab For Cutie
This song is featured on the album "Plans" released in August 2005. The album also features their hit "Soul Meets Body".

"Can't Take My Eyes Off Of You" | Imaginary Future
Another great cover on my choices of 25 Romantic Indie First Dance songs. If I were Frankie Valli, I would be smiling greatly at the awesome job that Imaginary Future did on this classic Charleston wedding song.

"The One" Kodaline
I got to play this beautiful song at one of my weddings back in the spring of 2018.  You can find the song on the album "Coming Up For Air" back in 2015.

"Dance With Me" | Phillip Phillips
Phillip Phillips wrote this song for his own wedding back in 2015.  You can find this beautiful song on his 2018 album "Collateral". Check it out down below. I have a feeling I'll be dropping this a lot at Charleston weddings once more brides and grooms discover it.

"Baby I'm Yours" | Arctic Monkeys
The Arctic Monkeys did an amazing job on this 1965 Barbara Lewis classic song. The song was a B side in 2006 to their hit "Leave Before The Lights Come On"

"Falling In Love At A Coffee Shop" | Landon Pigg
Check out this song on Landon's album "The Boy Who Never" back in 2009. The song was originally released in 2007 and went all the way to Number 13 on the adult contemporary charts. An alternate mix would be released on the 2009 album.

"I Would Do Anything For You" | Foster The People
Another Indie song that it's a bit more upbeat than a lot of the tracks I selected for this post. You can find this song on their album "Torches" from 2011, which also featured their hit "Pumped Up Kicks

"Falling For You" | The 1975
The 1975 is one of the great British indie bands to burst onto the scene over the past 5 years. You can find this song on their debut album from 2013

"Love" | Lana Del Rey
From her album "Lust For Life" released in 2017, this is another song I'll be using for a wedding ceremony I'll be doing the music for this Fall.

"Melt With You" | Nouvelle Vague
An excellent mellow cover of the 80s classic by Modern English.  Be sure you take a listen to the song down below and let me know what you think. When I heard it, I had to add it to this list of 25 Romantic Indie First Songs.

"La Vie En Rose" | Daniela Andrade
Released back in 2014, this lovely Canadian artist did an incredible on this classic song.  Take a listen and you are guaranteed to fall in love.

"First Day Of My Life" | Bright Eyes
Released in the spring of 2005, "First Day Of My Life", the song did not have too much traction on the charts, but it did rise to #21 on the UK Indie charts in 2009. The song has also been for the recessional for a lot of bride's and groom's who are seeking a beautiful Indie song for this moment.

Want To Hire Mike As Your Charleston Wedding DJ?
Hope you enjoyed this rather eclectic mix of Romantic Indie First Dance songs.  Be sure to take the music and entertainment of your Charleston wedding very seriously and hire a true professional wedding DJ who will be there for you on your wedding day. From start to finish, I'm always there for my couples with music advice. Check out the rest of my blog for more DJ tips and other music and playlist ideas. I keep it well stocked for my clients. Engagement season is right around the corner. Perhaps you might have just gotten engaged and are seeking a wedding DJ in 2019? Click HERE and let's schedule a time to meet up so you can tell me your musical vision for your wedding day.