20 Top Musicians From Chicago For Your Wedding Playlist

If you are just now finding this website and blog and are wondering why a professional wedding DJ based around the Charleston, SC area is now talking and blogging about the musicians and bands from Chicago, please read on. Please read on especially if you are in the Windy City right now and are looking at all the pretty sights that the Holy City of Charleston has to offer. Set your sights on this. It's early January and you just got engaged over the holidays. You look outside your Lake Shore Drive apartment and the snow is blowing up against your window. The temperature outside is a balmy 18 degrees and the wind is blowing in off the lake at a blustery 40 mph.  You and you are fiance are cuddling in each other's arms watching the flakes kiss the window and window sill. You turn to each other and give each other a kiss on the check thinking about your future together and begin to share the beauty that will be the most important day of your life. Your minds both drift to more of a spring setting, perhaps a place in the South, maybe near the water with numerous historic plantations. After much research, I give you some of the most popular musicians from Chicago. Be sure to read on if you have plans about coming to beautiful Charleston, SC for your destination wedding.

Download These Popular Chicago Musicians From Spotify NOW
So you maybe you are a modern bride or groom living in Chicago and you've decided to get married in Charleston, SC. Most of the destination couples I've worked with over the years have brought a little of their hometown with them (as it pertains to their playlist).  You can make sure your playlist has some of the sounds of Chicago on it by heading over to my Spotify right now. All you need to do is search for DJ Mike Bills.

Chicago
We certainly would not not leave off this list the name of the band that emerged in the late 60s and ruled the 70s and 80s with such great music like "Just Between You & Me", "You're The Inspiration". Native Chicagoan Peter Cetera who was in the band is later in this list.

Earth, Wind & Fire
The passing of Maurice White in 2016 has certainly not diminished how much Earth, Wind & Fire I tend to play at Charleston weddings. I am probably seeing it even more on playlists. You cannot go wrong with a little EWF when their music was deep in soul, funk, jazz, disco, R&B. Go ahead and throw some on the playlist right now.

Peter Cetera
The singer on so many of Chicago's biggest hits, Peter Cetera also had a rather successful solo career.  He has collaborated with so many other artists like Bonnie Raitt, Madonna, and Cher. His voice is unmistakable. Just take a listen to this classic from the The Karate Kid Part II soundtrack. His signature song as a solo artist would become "Glory Of Love", which was featured in the Karate Kid soundtrack.

Sam Cooke
Even though he was born in Mississippi in 1931, his family packed up and moved to Chicago in 1933, where he attended the same school as Nat King Cole. He was killed at the super young age of 33 in Los Angeles in 1964. Sam Cooke is a great way to bring to soul to your destination Charleston wedding.

Survivor
If you are bride and groom from Chicago looking to find the perfect song to introduce your bridal party when you come to Charleston to get married, the song down below might be the best. From the Rocky III soundtrack, this track was all over the radio in 1982. Survivor went on to release more great music in the 80s and early 90s, but none was as big as this. "Eye Of The Tiger" was the biggest song of Survivor's career and has been used for the years as a grand entrance song.

Styx
Another unmistakable voice; Dennis DeYoung fronted this great rock band from Chicago in the 70s and 80s, all the way up to the early 90s. From their hard rocking 70s with hits like "Blue Collar Man" to more of a ballad song by 1991, Styx is an essential Chicago artist to add into your wedding playlist.

Chaka Khan
Born in Chicago in 1953, she fronted the funk band Rufus in the early - mid 1970s. She broke out on her own in the 80s with dance classics like "I Feel For You" and this soft R&B classic from 1985. Throw some Chaka on your wedding playlist.

Richard Marx
A mainstay on soft rock and pop radio during the 80s and 90s, Richard Marx was the first artist to have his first 7 singles emerge in the Top 5 on the Billboard Hot 100 charts. He was also a producer for Keith Urban, NSync, and Luther Vandross. "Dance With My Father" by Luther Vandross was written and produced by Richard Marx. "Right Here Waiting" would become his signature song. It was released back in the summer of 1989 and would top the Billboard Hot 100 chart. For more soft rock of the 80s, be sure to check out the preceding link.

Wilco
Another great alternative band coming out of the great city of Chicago. This track has definitely appeared before on a few of my clients playlists during a cocktail or dinner hour.

R. Kelly
He emerged in the late 80s with the band Public Announcement and broke out on his own in the early 90s rattling off a string of 90s hits. Go ahead and jot down "Ignition" (Remix). It gets a lot of plays during weddings.

The Chi-Lites
One of the great R&B and soul groups from Chicago. They ruled the radio airwaves during the early 1970s and were the only group of it's genre from the Chicago area.

Fall Out Boy
Originating in 2001 in a suburb of Chicago, they could be seen performing within Chicago's punk music scene. This song is really what you want to be doing lots of at your wedding. Dance. Dance. Go ahead, write it down now.

The Emotions
They got their start in gospel but transtioned over into R&B and disco in the 70s. Their signature song was "Best Of My Love", which was actually produced by Maurice White of Earth Wind & Fire.

Veruca Salt
Originating in Chicago in 1992, Veruca Salt would burst onto the radio in 1994 with their song "Seether".  "Seether" would break into the Top 10 on the Modern Rock chart after it's release in the fall of 1994. For those brides and grooms who are interested in more 90s Alternative Music For The Cocktail Hour, be sure to click the link.

Plain White T's
The Plain White T's were formed in 1997, but it was not until 2007 before they released "Hey There Delilah". The song would make it all the way to Number 1 on the Billboard Hot 100 chart. Their follow-up song "1-2-3-4" has been a popular request over the years as a recessional song for the wedding ceremony.

Phillip Bailey
Phillip Bailey was a member of Earth Wind & Fire, but in 1984, he would team up with Phil Collins to record and release "Easy Lover". The song would top the charts in numerous countries, but only peak at #2 on the Billboard Hot 100.

Need A Great Wedding DJ For Your Destination Wedding In Charleston?
So there you go, 20 great musicians and bands from the Chicago area you'd want to add into your destination wedding playlist while you plan your amazing Charleston fete. You might also take note of  Urge Overkill and Herbie Hancock when you think of other Chicago music. Are you just recently engaged and are in the beginning phases of selecting your professional wedding DJ? Mike Bills Entertainment is very friendly to destination wedding couples and can set up and Skype or Facetime to discuss the music for your upcoming wedding. Click the link up above to submit a contact form to tell me a little more about your wedding. 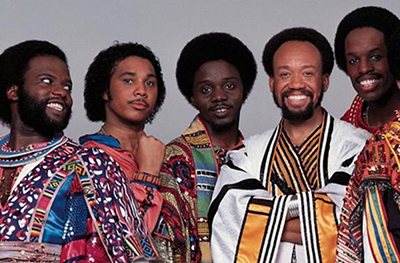