20 Songs To Survive The Great Charleston Snowstorm Of 2018

How does that Christmas song go? "Oh the weather outside is frightful, but the fire is so delightful....." Those familiar lyrics from the oh so popular Christmas song "Let It Snow". Mother Nature did just that, only 9 days after the Christmas holiday. Here in Charleston, SC, which is one of the top wedding destinations of the country, snow is a rarity and usually happens (where it accumulates) about once every 8-10 years. Charleston might get measurable snow once every 8 - 10 years, but the stretch of very frigid temperatures that have accompanied the frozen precipitation are pretty unprecedented, and something not seen in over 28 years. The average high temperature in Charleston in January is 59 degrees, and since New Year's Eve 2017, the city has not been above 40 degrees. This is a cold streak not seen since December of 1989. Thankfully it's rare, and it'll hopefully be another 28 years until this happens. Be sure you click ahead and scroll down for the soundtrack to get you through any snowstorm in Charleston.

I've actually resided in the greater Charleston area for my entire life and this is the longest period of time in my adult life that it's been this cold in the Holy City. The big snowstorm that hit us happened back on January 3, and we are still trying to get the city back to normal because our temperatures have not allowed for a lot of the melting of the snow and ice. Needless to say, I've been spending a lot of time at the computer trying to stay warm and haven been trapped inside my house and getting a severe case of cabin fever. The snow was pretty for about 10 minutes and has really created some iconic Charleston pictures, but it's time to move on with 2018 and starting planning another incredible wedding season and meeting with recently engaged brides and grooms. As a professional wedding DJ, I jotted down 20 songs that should warm us up here in Charleston as we wrap up this cold wave and melt all this snow. Enjoy this list of songs that are sure to conjure up throughts of warmer weather, those hot Charleston summers, and more "Charleston-wedding-worthy" weather. 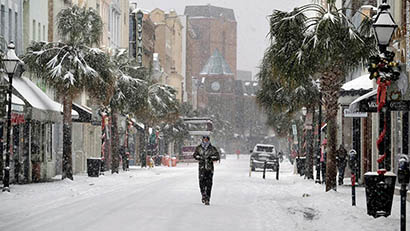 Download These 20 Songs To Get You Through The Snowstorm In Charleston From Spotify NOW
Thank goodness it does not snow very much in Charleston. If it started to happen more often, I might have to move even farther south.  Thankfully Charleston has been getting measureable snow maybe once a decade or so. In the event that the Holy City does get more snow, you'll have this playlist ready in your Spotify playlists to warm you up.  You'll find this playlist designed to help you survive a snowstorm in Charleston, but also many, many other playlists from Charleston Wedding DJ Mike Bills. Just do a search on Spotify for DJ Mike Bills.

"Heat Of The Night" | Bryan Adams |1987
Bryan Adams was one of the biggest artists of the 80s. Following up his multi-platinum record "Reckless", this track off his album "Into The Fire" released in the spring of 1987 and went all the way to Number 6 on the Billboard charts.

"Heatwave" | Martha & The Vandellas | 1963
One of the first all girl groups on the Motown label went all the way to number 1 on the R&B charts and Number 4 on the Hot 100 charts in the summer of 1963. The song was later covered and made a hit again by Linda Ronstadt in 1975.

"Some Like It Hot" | The Power Station | 1985
Power Station was a super group formed in the mid 1980s from Andy & John Taylor from Duran Duran, Robert Palmer, and Tony Thompson of Chic.  They also covered the classic TRex song "Get It On Bang A Gong", but this was their biggest hit coming in at Number 6 on the Hot 100 singles chart.

"Heat Of The Moment' | Asia | 1982
This was the first song to break off their self-titled album in 1982 and went all the way to Number 4 on the singles charts. The song also saw a resurgence in popularity when the movie "40 Year Old Virgin" was released in theaters in 2005.

"Hot Fun In The SummerTime" | Sly & The Family Stone | 1969
It was the one of the biggest songs of 1969, climbing all the way to Number 2 on the Billboard Hot 100. You can also find this song on the Soundtrack To Charleston, SC Summer.

"The Heat Is On" | Glenn Frey | 1984
It's hard to believe we're approaching two years since the passing of this Eagles founding member. Back in 1984 during his successful solo career, he wrote this song for the Beverly Hills Cop soundtrack.

"Drop It Like It's Hot" | Snoop Dog | 2004
Topping the Billboard Hot 100 in December of 2004, it was Snoop's first Number 1, and is still heating up dance floors all over at Charleston wedding receptions.

"Canned Heat" | Jamiroquai | 1999
Here's a great upbeat dance track to get you warmed up. You might have remembered it in the movie "Napoleon Dynamite". It was also the second Number 1 song for Jamiroquai on the dance charts.

"Summer Breeze" | Seals & Crofts | 1972
Reaching Number 1 in 1972, this song has me thinking about those pleasant summer breezes at wedding receptions all over Charleston, like right on the water at the Historic Rice Mill or out at Middleton Place.

"Summertime" | DJ Jazzy Jeff & The Fresh Prince | 1991
The summer of 1991 was an incredible summer of music that featured this song. It went all the way to Number 4 on the Billboard charts, and Number 1 on the Hot R&B charts.

After The Snowstorm, Be Sure To Talk To Mike Bills About Being Your Wedding DJ
And there you have it, 20 of the greatest songs to warm you up as we get over this major cold wave in Charleston. Looks like as I finish up this blog post, we won't be reaching 40 for the 7th straight day. That's something that has never happened before in Charleston. These past few days have been awesome for newly engaged couples to throw another log on the fire and begin to think about their upcoming Charleston wedding.  As one of Charleston's top wedding DJs, I am looking forward to meeting with new couples in the coming weeks. I know you are probably really excited about your engagement, be sure to click the link up above to be taken over to a contact form so you can share some details and we can set up a time to talk about your big day. I would love very much to be your wedding DJ in Charleston.