If you happen to follow my blog at all last year in 2017, you not only know that I am one of the most diverse 80s DJs in Charleston, but you also know that I used 2017 as a celebration of the 30th birthday of some of the greatest songs of the 80s, which were released in 1987. While 80s music is certainly not a requirement for your DJ to play at your Charleston wedding, it sure has been proven over the years to increase the fun factor for your wedding reception over at the Historic Rice Mill, The Seabrook Island Club, or even Harborside East.  We're now wrapping up the second full week of 2018 and it's time to begin my year-long celebration of the year that was 1988 from a musical standpoint.  This will be the first of many posts about 1988 and I am very excited. As I briefly glimpse at how things played out in 1988, the charts were exploding with artists like Whitney Houston, U2, UB40, George Michael, Rick Astley, INXS, and so much more.

While this post is meant to introduce you to the great year of 1988 in music, it was also the year we were introduced to movies like "Die Hard", "Who Framed Roger Rabbit", Rain Man, and Beetlejuice. So grab your Koosh ball, you know that hot toy that was hitting store shelves back around the Christmas of 1988 that was a rubber ball filled with a sort of jelly-like plasma.  I think you'll find quite a few "Charleston-wedding worthy" songs on this introductory post to the music of 1988. Ok, let's get ready for that time warp now back to the year 1988. Buckle your seatbelts. And we're off.

Download These Number 1 Songs From 1988 - Volume 1 From Spotify Right NOW
Did you know that Charleston Wedding DJ Mike Bills is one of the most experienced 80s DJs in Charleston?  As a host of numerous 80s shows on the radio, his forte is 80s music. If you are a modern bride or groom who is really into their 80s music and need some inspiration, you need to head over to Spotify right now. Once you get over there, just do search for DJ Mike Bills. 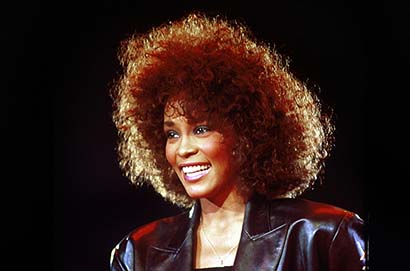 Above Photo Credit: RDA / Getty Images:
"So Emotional" | Whitney Houston | January 9, 1988
Whitney Houston continued her 80s success in early 1988 as she hit the top of the charts for the 6th time with "So Emotional". It was all over the radio and in dance clubs back in January of 1988.

"Got My Mind Set On You" | George Harrison | January 16, 1988
George Harrison might have been known as the "Quiet Beatle", but he certainly made quite a bit of noise on the Billboard charts beginning in the early part of January 1988. His cover of the 1962 James Ray became Billboard's Number 3 song of 1988. you can find it on his album "Cloud Nine", which was released in 1987.

"Need You Tonight" | INXS | January 30, 1988
It's still hard to believe that it's been just over 20 years since the untimely death of lead singer Michael Hutchence. What's even more hard to believe is this song was their only Number 1 song on the Billboard charts. It reached the top of the charts back in late January 1988.  I can totally see you adding this song into your cocktail hour if you were interested in doing an 80s themed cocktail hour at your Charleston wedding.

"Hazy Shade Of Winter" | The Bangles | February 6, 1988
Originally written and released by Simon & Garfunkel back in the mid 1960s, it was covered by one of the most successful girl groups of the 80s, The Bangles. It was recorded for the movie "Less Than Zero", and peaked at Number 2 on the Billboard charts in early February 1988. Perfect for your 80s cocktail hour playlist at your Charleston wedding over at the Seabrook Island Club.

"Could've Been" | Tiffany | February 6 - 13, 1988
The follow-up to her lead single from her self titled album "Tiffany", it was released in late 1987, and peaked on the Billboard charts at Number 1 for 2 weeks in February 1988. You might have remembered the lovely Carrie Underwood covered this 80s classic on American Idol.  Tiffany also shows up on my list 33 Ladies Of The 80s For Your Wedding Playlist

"Seasons Change" | Expose | February 20, 1988
One of the biggest acts from the 80s Latin freestyle genre out of Miami. Expose were an all-girl band whose music was all over dance clubs and the Top 40 charts beginning in early 1987. Seasons Change hit Number 1 on the Billboard charts on February 20, 1988 right after Tiffany's "Could've Been"

"Father Figure" | George Michael February 27 - March 5, 1988
The world of music is still a little more quiet after the death of George Michael on Christmas Day 2016. Released 3 days before the end of 1987, "Father Figure" would spend a 2 weeks at Number 1 on the Billboard charts at the end of February and beginning of March in 1988. It's slow and a bit sexy texture might be perfect for the 80s portion of your dinner playlist at your Charleston wedding.

"Man In The Mirror" | Michael Jackson | March 26 - April 2, 1988
The fourth single from his mega-selling album "bad" released in late 1987, the song was composed by Glen Ballard and Siedah Garrett and became one of the most uplifting songs of 1988. It's been added to many playlists at Charleston weddings. Take a listen to it down below to be taken back to the year 1988.

Did You Enjoy This 80s Time Warp And Need To Talk To Mike Bills About Being Your Wedding DJ?
Wasn't that fun? It's only the beginning as we salute more songs coming up in later posts that will turn 30 this year. We'll even explore some lost classics that you might have forgotten that came out in 1988.  Thank you again for finding me online and reading all the way to the end of this blog post. This means you really appreciate what I do. As one of Charleston's top 80s and Wedding DJs, it's my aim in 2018 to continue to have the freshest website content in the area. I love talking to brides and grooms about their music. If you are recently engaged and need to speak to Mike, just click the link up above to be taken over to the main website where you'll be asked to fill out a contact form and provide more information about your big day. If you are interested in seeing the rest of the biggest and best songs of 1988, feel free to click the links down below.