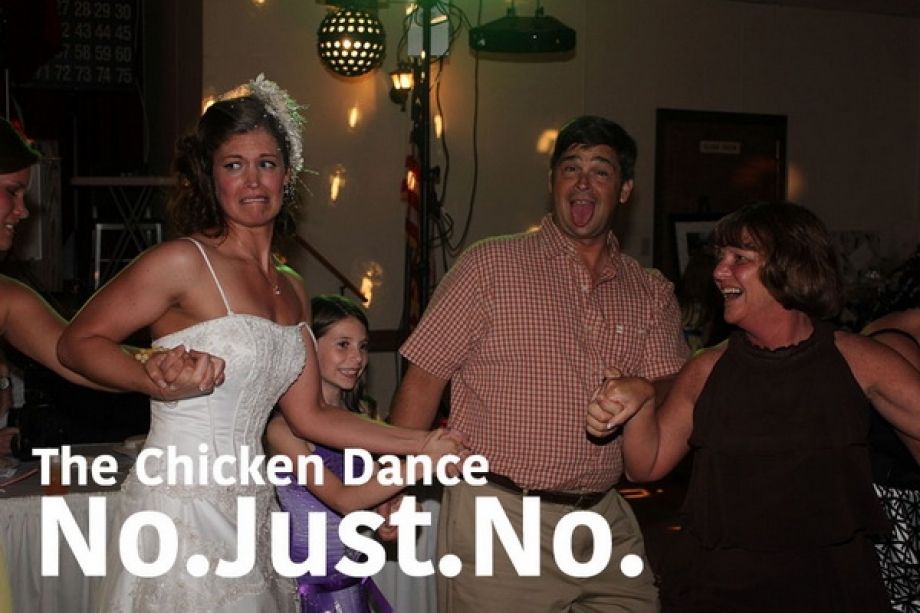 10 Cheesy And Cliche Songs Being Left Off Wedding Playlists

The music you choose to play at your Charleston wedding should be a personal soundtrack to the most important and most special day of your life. The music you choose should also create lasting memories that allow you to crack a smile randomly about your amazing night that you had with your family and guests while you sit in your office or at your home ten years later.  Over the years, there are certain songs that have become overplayed and "cliche" for weddings. Major wedding websites often spotlight the "Top 200 Wedding Songs" each and every year, but if you look closely at these lists, they really don't change much. They might have on them some "seasonal" songs that broke during the year that had wings and were catchy, but for the most part you see a lot of the same songs over and over again. One of the big reasons for this are a lot of the newer Top 40 tracks have a short shelf life and are recycled in and out very quickly.

Do you complain when you turn on your same old vanilla corporate radio station in your car? Let's be honest for a minute. Don't you hear the same songs over and over again and get so burned out on them? Aren't you glad you have Spotify or ITunes, or maybe even Pandora so you don't have to hear the same Top 40 songs over and over again while you are in the office? Thank goodness you have choices so that you can create custom playlists of what you would like to hear during the day while you are in the office. You know I recently reconnected with a former radio colleague who told me that he heard a classic rock station recently that only had about 220 songs programmed. "Really", I said. It would seem that a station that spans 40 years could come up with more than 220 songs. Why should your wedding playlist be composed of those same 200 songs that have been heard over and over again? With my company Mike Bills Entertainment, you have the freedom to pick and choose as few or as many songs as you would like to be on your playlist. I do receive the annual updates of the Top 200 Wedding Songs each year and you are certainly free to review it to give you ideas, but if you are interested in making your wedding reception less "cliche" and more about you, take some time to brainstorm about your likes and dislikes and create the ultimate playlist for your Charleston wedding reception.  If you need help, that what I am here for. Brides tell me all the time "I don't want my reception to sound like all the others I've been to". In order for this to occur, you need to create a playlist that is about you. These 10 songs have become overplayed over the years and in very recent years have been left off many many wedding playlists.

Download These Cheesy & Cliche Wedding Songs From Spotify NOW
The songs you don't like are equally as important as the songs you love which is why it's important to download this playlist of some of the songs that folks have just gotten burned out of. It's ok. You don't need to keep these songs on your phone or your tablet, just take a look and take note, while you are putting together your wedding playlist. When you head over to my Spotify profile, you'll be greeted by a ton more playlists specifically designed for modern brides and grooms to provide playlist inspiration. Head over there now and just search for DJ Mike Bills

" I Gotta Feeling" | Black Eyed Peas
This song just celebrated eight short years since it's release. (May 2009). While it's a song that gets folks going, I've seen it in decline in recent years.  "I Gotta Feeling" appeared on the album The END, which was actually produced by David Guetta.

"Macarena" | Los Del Rio
It's hard to believe that in 1996 and 1997, this song was the number one song in the country. People were doing the Macarena in their cars, in their offices, and back in the 1990s at their weddings. Overplayed and cliche, the "Macarena" continues to have dust on it and remains one of the least requested songs.

"I Will Survive" | Gloria Gaynor
Do you really want a song about moving on after a failed relationship played during the most beautiful day of your life?  The cover by Cake is pretty awesome but let's keep the music on your playlist nice and fun and upbeat. "I Will Survive" was released during the height of the disco era and would peak at #1 on the Billboard Hot 100 in 1979.

"Cha Cha Slide" | DJ Casper
It's been 17 years since the release of the Cha Cha Slide. It reached number 1 in Great Britain in 2004.   Brides and grooms have been putting this into the "line dance" category.  Perhaps only topping at #83 on the Billboard Hot 100 was a preview of what would see a decline in the popularity of the Cha Cha Slide.

"YMCA" | The Village People
You have to ask yourself this question. Do you want to add disco tracks to your wedding playlist? Very seldom is this song added into modern wedding playlists. The song was released in November of 1978 on the Casablanca (disco) record label and would peak at #2 on the Billboard Hot 100.  If your wedding was held then, you'd probably definitely throw this song on the playlist, but it's more or less being left at home by most DJs these days.

"Celebration" | Kool & The Gang
Reaching number 1 back in February of 1981, it's another overplayed, cliche wedding song.  If you insist on adding some Kool & The Gang into your wedding playlist, maybe throw on "Jungle Boogie" which is more funky. I can remember playing this song during an outdoor wedding where the bridal party got a hold of all the sparklers and lit them all while dancing to this song.

"The Wobble' | VIC
The line dances continue to get left out of wedding playlists and this one is no exception.  This song is perfect for the club, but becoming less and less perfect for Charleston weddings.

"Let's Get It Started" | Black Eyed Peas
How can two Black Eyed Peas songs be on this list? Well, this song got into my head about being left off playlists because there is a You Tube circulating about the "worst wedding DJs". Do a search on You Tube and you'll see what I am talking about. This song is "cliche" for the bridal party introduction song but I can point you in the right direction of much less cliche introduction songs. "Let's Get It Started" was released back in the summer of 2004 and only topped at #21 on the Hot 100. Perhaps Billboard knew that brides weren't gonna like it?

Care To Talk To Mike Bills About Leaving More Of These Songs Off Your Playlist?
These are only a few of the songs that seems to be dwindling in popularity. If you are looking to eliminate "cliche" from the description of your wedding playlist, be sure to submit a Do Not Play List to your wedding DJ. Are you enjoying the content to this blog? Are you recently engaged and looking to begin the very important search for your wedding DJ in Charleston? You've come to the right place. I absolutely love talking to couples about music. Let's talk about your wedding soon. Be sure to click the link up above and you'll be taken back over to my main website so that you can fill out a contact form and provide some details about your big day. I love to talk to couples about their music and I look forward to speaking with you.